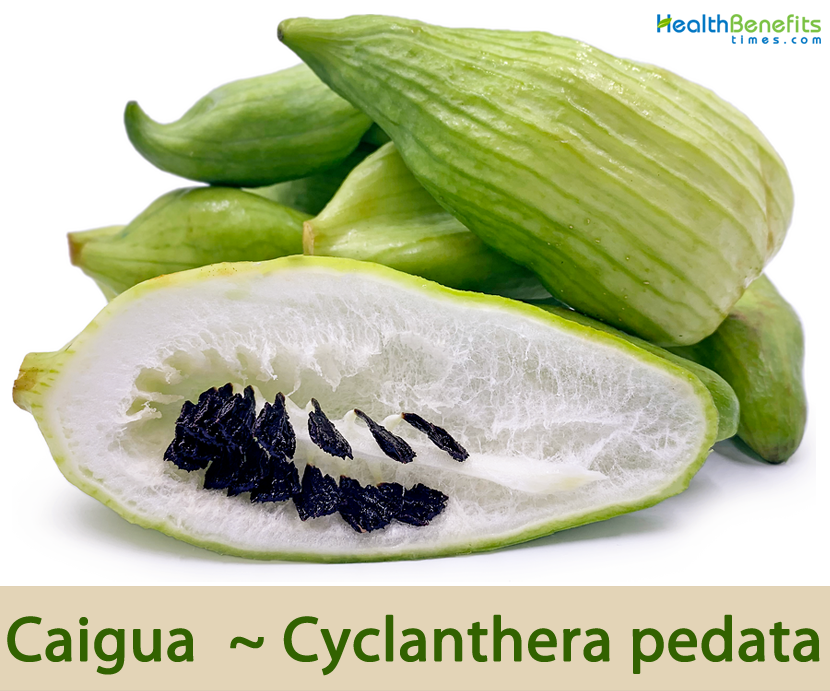 Caigua pronounced kai-wa, is an herbaceous plant belonging to the Cucurbitaceae family of plants, the same family of plants as pumpkin, cucumber, watermelon and gourds, among others. Its scientific name is cyclanthera pedata and it is also known by the common name of Achocha, Slipper goard and Stuffing gourd. It is a plant with medicinal uses and endless characteristics worth knowing. The plant is not known in the wild, but presumably native to many parts of Central America, South America and the Andes. It is found in the Caribbean Islands, Colombia, Bolivia, Peru and Mexico. These plants are also quite popular in eastern countries such as North-Eastern India, Bhutan and Nepal. In Africa cultivation is restricted to highlands of East Africa. Some of the popular common names of the plants are Cyclanthera, Accocha, Achocha, slipper gourd, sparrow gourd, stuffing cucumber, Caribbean pygmymelon, Stuffing gourd, Wild cucumber, Lady’s-slipper, Threelobe pygmymelon, Caihua, Caygua, Cayua, Korila, achojcha, achokcha, Achoqcha, archucha Barela, Bottle gourd, Korila, Lamthabi, Meetha karela, Patal, Prickle cyclanthera and Calabash gourd.

The fruit is often eaten in the tropics and the plant has a good reputation in the treatment of several disorders. Today some people promote it as one of the lost crops of the Incas. The Incas used Caigua as a medicinal ingredient, mostly made into a tea as a remedy for high cholesterol, diabetes, or gastrointestinal problems. It was also used as an anti-inflammatory, diuretic, and analgesic and the fruits were boiled in milk and gargled to remove inflammation associated with tonsillitis. It is the small fruit which are generally harvested and eaten although the plant extracts are well recognized as having many medicinal type uses, especially in the control of obesity or high blood pressure. Fruit is comparatively hollow and is most often stuffed (after seed is taken out) before cooking, similar to cooking aubergines or peppers. Young shoots and leaves are also edible as greens. Raw fruit are also edible. Green fruit is suitable for use in the preparation of pickles or with salads.

Caigua (Slipper gourd) is a vigorous climbing, herbaceous, monoecious, annual vine that normally grows about 4.5 meters or more long, perhaps up to 12 meters, much-branched and with twining tendrils that enable it to climb up, on and over structures. The stems scramble over the ground, clambering into surrounding vegetation and supporting themselves by means of long tendrils. The plant grows well in any type of soil. However, for the best crop and to avoid growing problems such as root rot, you should adjust the soil to make it as close to loamy or sandy as possible. As for the soil pH, it should be slightly acidic or as close to neutral. Alkaline soil can have a damaging effect on the roots and the vine. Adding organic compost and aged manure will raise the acidity levels of the soil to the desired mark.

Caigua prefers the soil to be constantly moist. This can be tricky as the temperature rises in the summer, and the sun bears down on the plants. On average, you’d need to provide one inch of water per week. As the vine grows and expands, its roots dig deeper into the soil. So you need to water the vine deeply to reach the roots faster. The best time to water the caigua is in the early morning. The late spring and summer are the times when the vine needs the most water. Keep the plant hydrated to avoid problems with flowering and fruiting.

More nutrients in the soil, the better crop you’ll get from each vine. Before you plant the seeds, mix in a good amount of aged manure and organic materials. This has the dual benefit of enriching the soil with a slow-release fertilizer that doesn’t burn the roots nor trigger a fast growth spurt. It also improves the aeration and drainage of the soil. Once the vines start climbing the trellis or support system, apply a balanced fertilizer once every 2 weeks. When you see the flower buds emerging, switch to a phosphorus-high fertilizer to encourage more blooms. After the flowers get pollinated, go back to a balanced 10-10-10 fertilizer. Side dress with organic compost until the fruits is ripe.

The foliage is glabrous and is said to emit a cucumber-like odor if injured. The stems of C. pedata are thin and bear palmate leaf laminae that are deeply 5- to 10-lobed and lanceolate with serrated edges. The leaves are composed of three to five, toothed, light green, lance-shaped leaflets fused at the base, in a cart-wheel shape up to 20 cm (8 in) in diameter. They are attached to the vine on 8 to 10 cm (3 to 4 in) long leaf stalks. From the axils of the leaves arise the trifid tendrils that the plant uses to climb.

Female flowers that are fertilized develop into tear shaped fruit that is 10-20 cm long and 3–8 cm wide, irregularly ovoid, curved and pointed at the ends. Fruits are dark green with smooth, ridged skin when young, ripening to a light yellow-green hue with smooth or spiked skin, depending on the variety. The fruit surface can be smooth or softly spiny with a shaggy appearance. Underneath the surface, the flesh is pale green to white with a spongy and crisp consistency, only 0.5 cm thick, and is said to have a flavor resembling that of cucumbers. Over time, the flesh will begin to hollow, developing a cotton-like texture, encasing several black seeds in the center of the pod. It was observed that fruits growing on a plant sprawling on the ground were more irregularly shaped than usual: the stylar end of the fruit, normally pointed and black, was curved so as to occur on the upper side of the fruit, attributable to greater growth of the lower side of the fruit.

The seeds are edible and soft when young, transforming into hard, black, and inedible, arrow-shaped kernels as they mature. Seeds are 12 mm long, 7 mm wide and 3 mm thick and are flat and matt black. In shape, they are said to resemble diminutive mud turtles, having head and neck outstretched and four projections at angles where the feet would be. The surface is not smooth, instead described as pimply, with ridges and depressions. They are distributed in two rows in number of 12 normally attached to a placenta.

In South America the fruits are eaten much like bell peppers – either raw or cooked (after the seeds are removed). They are also prepared as stuffed peppers; stuffed with meat, fish or cheese and then baked – earning its name “stuffing cucumber.” Caigua is currently cultivated as a food in the Caribbean, Central and South America. It has been introduced into Florida where it is called “wild cucumber” and is considered a weed pest in lawns and gardens.

As with other plants you grow in your garden, not all plants play nice together. Some get along fine and even develop symbiotic relationships, while others start competing for resources from day one. In the case of caigua, you can plant the vine along with tomatoes, oregano, onions, dill, peas, beans, and radish. The legumes fix nitrogen in the soil, which makes fertilizing the soil redundant. Oregano and onions are natural pest repellents and protect neighboring plants from wildlife and bugs. 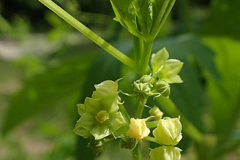 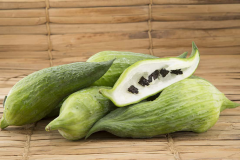 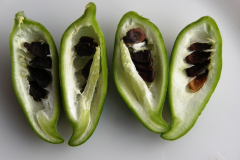 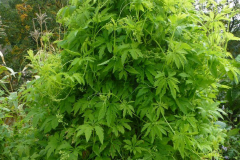 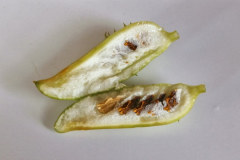 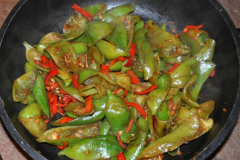 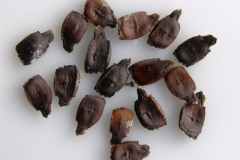 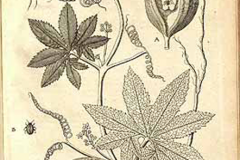 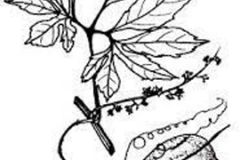 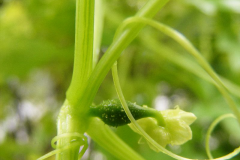 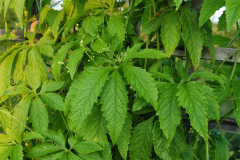 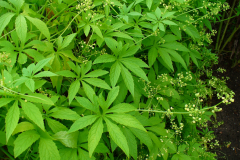 Researches show that this cucumber/pepper looking fruit helps to lower LDL or bad cholesterol by up to 75%, and increase HDL or good cholesterol by over 20%. In Peru Caigua has a reputation of being one of the most powerful fat absorbing veggies around, and a good detoxing agent.

Caigua Fruit is very low in calories and consists of mucilaginous agents that help with obesity and sooth the GI. People dieting can use Caigua as a good way to lose weight fast and at the same time lower cholesterol.

Caigua has the ability to reduce the cholesterol absorbed by the body. Thanks to high concentrations of sitosterol-3-beta-D-glucoside, which the body mistakes for cholesterol, the levels of cholesterol in the blood reduce the more you eat caigua. This benefits the cardiovascular system and reduces heart diseases.

Besides reducing cholesterol levels, caigua has the benefit of balancing triglycerides and lipids among women going through menopause.

Traditional uses and benefits of Caigua 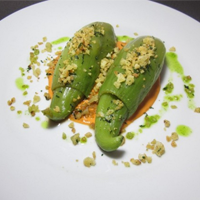 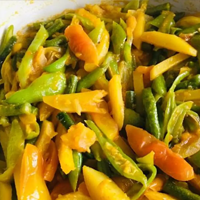 C Herbs and Spices
Share. Twitter Facebook Google+ Pinterest LinkedIn Tumblr Email
Previous ArticleUnderstanding the top ways to manage addiction withdrawal symptoms
Next Article What Should You Do if You Are Not Healthy Enough?