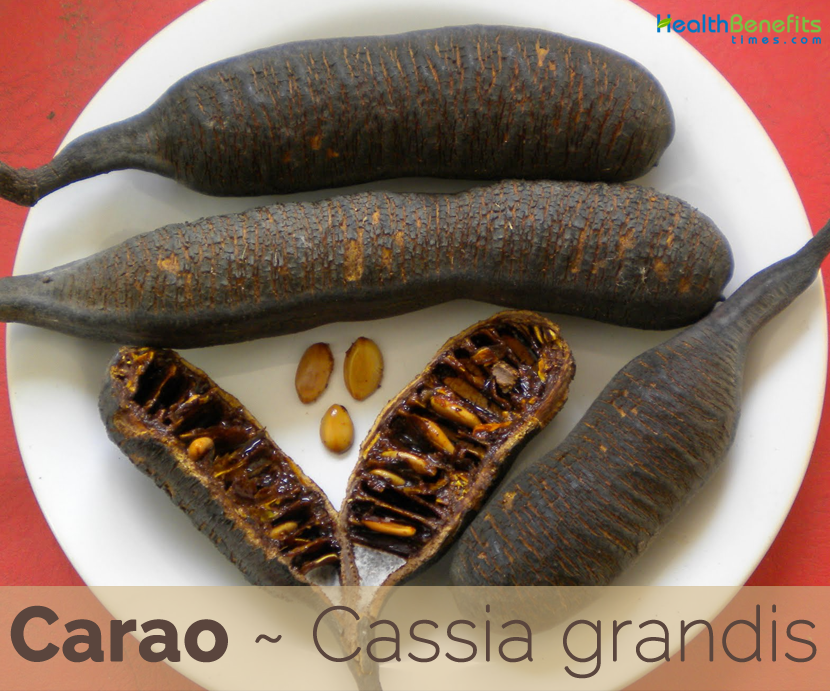 Cassia comes from the ancient Hebrew word “quetsi’oth” and was first used by Dioscorides, a physician in Ancient Greece (40–90 AD). Linnaeus, also known as the father of taxonomy, was the first to use Cassia to signify members of this genus. The species name grandis is the Latin word for “large, powerful, showy, or big” and is in reference to the height of this tree, as pink shower is one of the tallest Cassia species. The name “pink shower” comes from the bright pink blossoms that this tree produces. It is sometimes called “stinking tree” because the pulp in its pods has a very strong smell. The plant is gathered from the wild, mainly for local medicinal use. When in flower, this is one of the most handsome trees of Central America, especially along the Pacific lowlands, reminding one of apple trees, by both the form of the tree and the coloring of the blossoms. It is often cultivated as an ornamental, being valued especially for its floral display.

Carao is a medium sized deciduous or semi-deciduous tree that grows about 15-25 (30) m tall with a straight more-or-less cylindrical trunk up to 60 cm in diameter. This tree is now grown primarily grown as an ornamental in open, brushy or forested hillsides or on thinly forested plains, often about dwellings or along roadsides and in pastures. The profuse, wide-spaced, dangling branching leads to a dense, umbrella-shaped canopy, and young branches and inflorescence are covered with rusty lanate indumentum. The bark is smooth, pale grey.

Leaves are pinnately compound, 6–15 inches in length, and alternately arranged. Leaflets occur in pairs of 10–18 opposite one another. Each narrow leaflet is 1–2¼ inches long and has an elliptical shape. The topsides of leaflets are green and the undersides are reddish.

The tree is particularly noted for producing a show-stopping bloom of coral pink flowers arranged in 4-10 inch long drooping racemes (20-40 flowers per raceme) in early spring. Each flower is 3 cm, has five large, pinkish-lavender sepals and an equal number of rounded and peach-colored petals not uniform in shape. The flowers are initially red, fading to pink and later orange, with the median petal red with a yellow patch. There are three large stamens flanked by various smaller staminal appendages and a long, curved pistil. Bloom time extends from February-April, but in some climates begins later in spring extending into summer.

Flowers are followed by long, wood-like fruit capsules reach lengths of up to 50 cm (20 in) and have many seeds that are covered in a thick, dark-colored pulp or honey-like substance that has been described as having an odor that ranges from being sweet to unpleasant. Each pod has 70-80 seeds. Pods appear green but mature to black, remaining on the tree until the following year. Sticky brown pulp inside the pods has been used in herbal medicines. The pods contain a pungent, sticky liquid that creates a foul smell when the pods fall to the ground and eventually break open.

Traditional Uses and benefits of Carao