Trending
You are at:Home»Herbs and Spices»Chaga mushroom benefits and uses 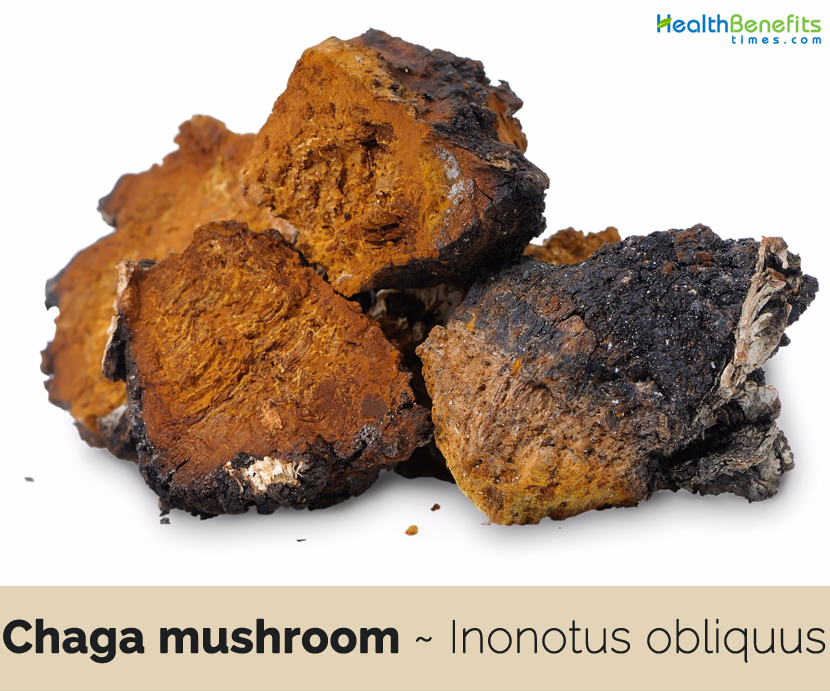 Whether you call it Chaga Mushroom, True Tinder Fungus, or Inonotus obliquus, chaga is a parasitic fungus commonly found on Birch and some other hardwood trees in Russia, Northern Europe, and the Northern US and Canada, Russia, Siberia and other parts of Asia. It is a non-toxic fungus in the Hymenochaetaceae family and has numerous medicinal qualities. At first glance, the mushroom doesn’t look very appealing; actually, it doesn’t even looks like a mushroom at all! Appearances can be deceiving, however, as this special mushroom packs a punch when it comes to its health value. Few of the common names of the mushroom are Cinder conk, Birch conk, Clinker polypore, Chaga Mushroom, True Tinder Fungus, black mass and birch canker polypore.

The name “chaga” (pronounced “tsjaa-ga’) comes from the Russian word of the mushroom (Anglicized from czaga), which in turn is evidently derived from the word for the fungus in Komi-Permyak, the language of the indigenous peoples in the Kama River Basin, west of the Ural Mountains. It is also called “The Mushroom of Immortality” by the Siberian Russian Shamans and the “Diamond of the Forest” by the Japanese, Chaga earns its moniker, “The King of the Medicinal Mushrooms” due to it being one of the most powerful antioxidants in the world. Chaga consists of a variety of substances such as polysaccharides, betulin, betulinic acid, and inotodiol, and is said to offer a number of health benefits. It has been used by many major Northern climate dynasties for health and healing. Chaga mushroom can be eaten as a food, and is also made into tea, syrup, bath agents, and extracts. It is an important functional medicine for the apothecary to help modulate and boost the immune system. It also tastes like chocolate.

Chaga mushroom is a tough, woody parasitic fungus that commonly grows in cold northern climates, specifically on birch trees. It grows in a “conk” form. Found mostly on white, yellow, and black birch trees they can be found on other hardwoods. Thriving on the cold winter climates of its environment it only grows in the wild, and repeated attempts to cultivate it have all ended in failure. The sterile conk is irregularly formed and has the appearance of burnt charcoal but is distinguished from other growths by its orange tissue. It is not the fruiting body of the fungus, but a mass of mycelium, mostly black due to the presence of massive amounts of melanin.

Chaga is a mushroom that contains medicinal properties that can help strengthen and heal the body naturally. Chaga takes three to five years to reach a harvestable size. Once harvested, chaga can take up to a decade to regrow to a harvestable size. Practice mindful harvesting techniques and do not remove the entire fruiting body from the tree. The mushroom has a hard texture, so it traditionally made into a powder and brewed for a long time in hot water to make a chaga beverage (often called chaga tea or coffee). It is also available as a dietary supplement and tincture (a liquid extract).

There is presently a lack of clinical trials testing the effects of chaga. However, certain preliminary research recommends that chaga mushroom components may offer certain health benefits. For instance, a number of studies on cell cultures show that extracts may possess antioxidant, anti-inflammatory, and immune-stimulating properties. Let’s have a look at several findings from the available research on chaga’s health benefits

Chaga mushroom is used as a folk medicine for the treatment of cancer. Due to the presence of two chemicals called betulinic acid and ergosterol peroxide, the mushroom can prevent the multiplication of human cancer cells and therefore check the progression of cancer. Thus, chaga mushrooms can be included in cancer treatments as an effective food supplement. (1), (2), (3), (4)

Our skin needs protection! Chaga is wonderful for both internal and external use. In addition to containing melanin (the pigment in your skin responsible for sun-protection) Chaga is also fights infection, promotes good circulation, and reduces inflammation.

Chaga mushrooms consist of good amount of antioxidant superoxide dismutase (SOD). This is considered to be among the most powerful antioxidants in the body that fights free radicals and stops inflammation. Chaga mushroom has the highest oxygen radical absorbing capacity (ORAC) or the highest antioxidant capacity among mushrooms, with an ORAC score of 146, 700 μ mol TE/100 g.1 To put this in perspective, this value is way more than that of dark chocolates or most berries, common antioxidant foods.

Thus chaga can boost your immunity and keep diseases at bay. Chaga mushrooms also consist of a sugar called beta-d-glucan, which can improve your immune responses. In fact, the traditional uses of the mushroom revolve around its antiviral and antibacterial properties that can decrease your risk of infections and communicable diseases.(5), (6), (7), (8), (9), (10), (11), (12)

If you’re type 2 diabetes sufferers, chaga mushrooms can help reduce the sugar level in your blood. Research conducted on mice showed that chaga mushrooms can regulate the blood sugar levels in diabetic mice. Blood and urine samples of mice that were fed chaga powder for 8 weeks proved the hypoglycemic (blood sugar-reducing) nature of the mushroom. Though no research has been conducted on humans, the traditional uses of chaga mushrooms to regulate diabetes have been considered effective, suggesting that they can indeed be included in your anti-diabetes diet. (13), (14)

Consumption of chaga mushroom has been associated to improved memory and better learning. Research revealed that the methanolic extract of chaga fed to mice for 7 days resulted in an enhanced cognitive function. By decreasing oxidative stress in the brain, the mushrooms can protect the brain cells from damage and boost their function.

Furthermore, chaga mushroom tea acts as a coffee-like stimulant and improves alertness. Fortunately, it doesn’t cause jitters or restlessness unlike coffee or other energy-boosting drinks. So, it helps you become more alert when you need to be, yet doesn’t hinder with your sleep or prevent you from relaxing.(18), (19)

Chaga extracts are capable of increasing liver function and aiding detoxification. Chaga shields your liver from harmful toxins and prevents cytotoxic injury. It also protects your liver from disease by reducing oxidative damage and preventing the leakage of liver enzymes like ALT (alanine transaminase).

If you are a fitness enthusiast or are looking for ways to exercise without immediately feeling tired, you might want to consider chaga mushroom. Research revealed that chaga mushroom can increase the duration of physical activity (swimming, in this case) in mice and reduce exercise-induced fatigue. This energy-boosting ability of chaga mushroom makes it a potential remedy for fatigue, particularly if you’re performing intense workouts or running marathons.

Chaga mushroom consists of high levels of the antioxidant superoxide dismutase (SOD). It’s hailed for its ability to fight oxidative stress as well as aging-related changes caused by free radicals. Thus, consumption of chaga can increase longevity and delay aging.  Also, chaga mushrooms are rich in vitamin C, which is known for its ability to prevent wrinkles, loose skin, and other signs of aging.

How to Make Chaga Tea

The most popular way to consume chaga is by drinking a delicious cup of chaga tea. Below is a simple chaga tea recipe for you to try at home.