Trending
You are at:Home»Foods»Health benefits of Dark Chocolate 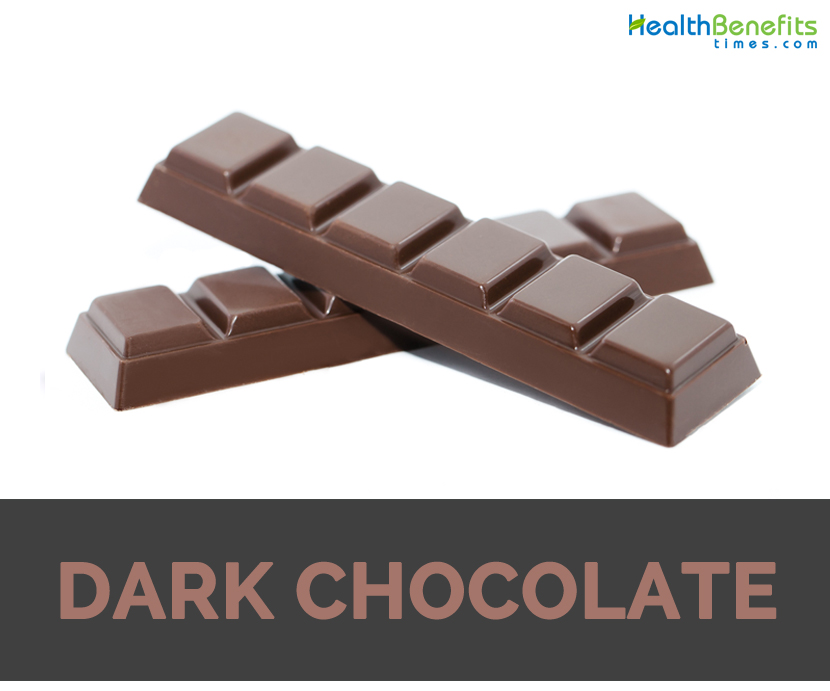 Chocolate is processed or raw food which is produced from seeds of tropical tree such as Theobroma cacao. Seeds are roasted and grounded and often flavored with vanilla. It is prepared in form of liquid, paste or in block and used as a flavoring ingredient in sweet dishes. Also called semi-sweet chocolate or black chocolate, it is made by adding sugar and fat to cocoa. The dark one is semisweet and extra dark ones are bittersweet and the ratio of cocoa butter to solids vary. Chocolates are considered to be beneficial for health. Especially dark chocolate is helpful to treat cardiovascular problems. It has antioxidant properties, improves vascular function, endothelial function and insulin sensitivity. The compounds found in dark chocolate helps to lower blood pressure and prevent the chances of heart problems. Studies have shown the beneficial effects of chocolate on cardiovascular health which inspires manufacturers of chocolate to form proprietary methods of pressing cocoa beans upholding flavonoid content.

History of chocolate takes us back to 1900 B.C. when cacao seeds are regarded as a gift of Quetzacoatl (god of wisdom). In 1847, British chocolate company initiated first solid chocolate bar (edible) from ingredients: sugar, cocoa powder and cocoa butter. In late 1800s and early 1900s, the names such as Mars, Cadbury and Hershey were renowned. Chocolate’s popularity has grown over years. The chocolate producers produced dark chocolate which is not healthy. Now there are more companies which make chocolate of high quality not only being dark but is fairly traded as well as organic.

Dark chocolate has become a trend in present market place and its sales do not seem to slow down. Science has shown much more benefits of dark chocolate due to which its popularity grows continuously. Emulsifier such as soy lecithin helps to preserve the uniqueness in flavor.

Generally, cardiometabolic disorders are burden on people but it could be prevented. The meta-analysis and systematic review of cocoa products with flavonol helps to prevent this disorder.

Cocoa has a primary alkaloid, theobromine having one tenth cardiac effects of other methylxanthines. The activity of theobromine has similar activity to caffeine. When theobromine is devoured in form of large chocolate bar do not cause electrophysiologic or acute hemodynamic cardiac changes in young and healthy adults. In healthy men, theobromine pharmacokinetics were similar when measured after 14 days of abstention from methylanthines and after one week of ingesting dark chocolate. The study results could not be extrapolated to patients having any diseases of conditions or effects of consuming chronic chocolate.

Dark chocolate is helpful in making blood vessels healthy or circulation to prevent type II diabetes. It has flavonoids which lowers insulin resistance that help cells to have normal function and able to efficiently use body’s insulin. Low content of glycemic index does not cause huge spikes in level of blood sugar.

This chocolate promotes flow of blood to brain and heart by improving cognitive function. It has several chemical compounds with stimulant action or positive effect on cognitive health and mood. It has phenylethylamine which promotes brain to release endorphins or feel alert. Dark chocolate has caffeine which acts as a mild stimulant. In comparison to coffee, dark chocolate has less caffeine helping in mood disorders.

Theobromine found in dark chocolate is known to harden tooth enamel. It refers that proper dental hygiene lowers the chances of cavities. A mild stimulant, theobromine is not strong as caffeine but could restrain coughs. It suppresses the activity of vagus nerve responsible for coughing and also cures cough.

Dark chocolate is all packed with antioxidants acting against free radicals being the main cause for oxidative damage. Free radicals are involved in process of aging and causes cancer. The consumption of antioxidant rich foods such as dark chocolate prevents body from various types of cancer and also slows down the aging signs.

Cocoa has magnesium correcting the deficiency of magnesium in rats. Insufficient magnesium in the body are the cause for cardiovascular alterations, GI, renal, muscular and neurological disorders. Cocoa is used to accomplish the magnesium need.

Free radical damage is accused for memory loss and cognitive decline in aging. The study conducted in healthy young people resulted that consumption of flavonol rich cocoa is related with increase in cerebral blood flow which suggest that cocoa has a role in treating cerebral impairment such as stroke and dementia.

How to store Dark Chocolate?