Trending
You are at:Home»Foods»Cocoa bean 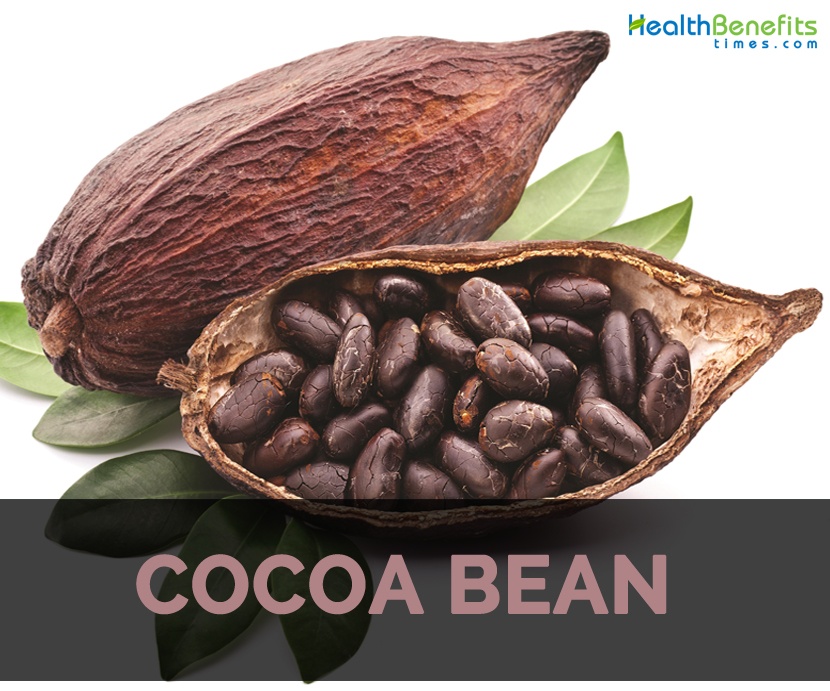 The beans which have been derived from the Cocoa tree are called Cocoa beans. The other common names for Cocoa bean are Cocoa, Cacao and Cacao bean. It is used to extract cocoa butter and cocoa solids. It is used as the basis for making chocolate. The term cocoa was derived from the Spanish word “cacao” and Nahuatl word “cacahuatl”. Criollo, Forastero and Trinitario are the three main varieties of the cocoa plant. Cocoa is loaded with antioxidants such as flavonoids and procyanidins that help to provide anti-aging properties. It has also high concentration of epicatechin that is helpful for cardiovascular health. Ghana, Cote d’Ivoire, Ecuador, Nigeria and Cameroon are the largest exporters of Cocoa beans whereas United States, Netherlands, Belgium-Luxembourg and Malaysia are the highest importers of Cocoa beans in the world.

It is a tropical tree originating in the Upper Amazon Basin bordering the eastern slopes of the Andes. Its northward migration into Central America and Mexico, although lost in history, has been established using modern molecular techniques, which have documented phylogenetic relations among present germ plasm. In pre-Hispanic times cacao cultivation and cacao seed processing evolved into different technologies, to the extent that the culture is acknowledged as one of the most sophisticated pre-Hispanic agroforestry systems. Cacao seeds did not just have religious, ceremonial, medicinal, and bever age uses, but even became a common currency among native Olmecs, Mayans, and Aztecs. Because of their long history and present value, cacao trees and beans have been widely described from morphological and taxonomic perspectives.

Being Cocoa tree native to America, it has been originated in Mexico and Central America. It was consumed before 5000 years ago by pre-Columbian cultures. It could be found in Orinoco and Amazon basins. It was used as a common currency all over Mesoamerica. Cocoa was vital in pre-Columbian Mesoamerica. In the mid-17th century, chocolate got introduced by Spaniards to Europe. Cocoa tree was introduced to Philippines and West Indies. African. Tetteh Quarshie introduced it to modern Ghana and Gold coast.

Typically, it has red, white, green to yellow pods with bumpy or warty skin and pointed tips. The beans are light purple to white in color. The beans have fine flavor.

It is grown in Africa as well. Ghana and Ivory coast is the highest producer of cocoa beans. The color of the pod ranges from red to yellow.

The name was derived from island nation called Trinidad. It is used to enhance the flavor of chocolate. It was firstly planted in 1834 in Ceylon and again the plantation repeated in 1880. It was transplanted to Madagascar, Fiji, Singapore, Samoa and Tanzania. Due to its fine flavor it is used for making chocolates.

The fermented seeds of Cocoa tree (Theobroma cacao) are called Cocoa beans. It is inherent to Amazon region and is a vital crop in South and Central America. Cocoa beans have high content of minerals such as magnesium, iron, copper, phosphorus, calcium and manganese. It is an excellent source of potassium, selenium and zinc. It also possess monounsaturated fats such as palmitic acid, stearic acid and oleic acid.Cocoa bean is packed with various health benefits such as providing relief from constipation, cholesterol, obesity, high blood pressure, cancer, bronchial asthma, diabetes, neurodegenerative disease and chronic fatigue syndrome. It helps to heal the wound fast, improve cardiovascular health, skin care and brain health. It is also helpful for curing deficiency of copper. It helps to enhance mood and has positive effects on neurotoxicity.

Cocoa bean has flavonoids that help to lower blood pressure and enhance elasticity of blood vessels. The research shows that it has positive effect on diastolic and systolic blood pressure. It is possible due to antioxidants that promote the nitric oxide production that helps to relax blood vessels. Additionally, it maintains the normal circulatory system. (1) (2) (3) (4)

The study shows that cocoa bean has high antioxidants in comparison to green tea, black tea and red wine. The antioxidants helps to eradicate oxygen based free radicals from the body. Moreover, it has numerous phenolic phytochemicals and flavonoids. (5)

Consuming chocolate has been reported to increase the total antioxidant capacity in human blood plasma, since cocoa polyphenols exhibit strong free radical scavenging activity. Monomeric epicatechins and oligomeric procyanidins are effective in inhibiting both dioxygenase and 5-lipoxygenase, therefore preventing oxidation. Regular intake of cocoa and its derivatives increases the plasma level of antioxidants, which is a desirable effect because it protects against reactive oxygen species (ROS).

Cocoa is rich in flavonol which has positive effects on brain health. It helps to assist on memory functions and learning. It promotes the blood flow to brain and helps to cure vascular disorders. (6) (7) (8) (9)

Cocoa intake effectively improves insulin resistance as well as glucose metabolism. It also regulates the level of sugar in the body. Proanthocyanidins inhibits the formation of cataracts which is promoted by diabetes. It has antioxidant activity that helps to treat diabetic problems such as diabetic nephrotoxicity. Cocoa eliminates free radicals due to the presence of therapeutic properties that helps to treat the cellular injuries. The research shows that the intake of flavonol helps to improve the vascular functions of diabetic patients. (11) (12) (13) (14)

Cocoa beans have theophylline and xanthine that helps to relax bronchial spasms and opens constricted bronchial tubes. It promotes the flow of air easily and cures allergies, shortness of breath and asthma. Its intake provides relief from the conditions such as bronchial asthma. (15)

The extracts of Cocoa are believed to possess wound healing and therapeutic properties. The extracts prevent the chances of infections in the human body. It is also useful to eliminate bacteria named Helicobacter pylori from the human body. (16) (17)

The study conducted shows that cocoa helps to prevent obesity due to high fat diet. The intake of cocoa helps to modulate lipid metabolism and reduce transport and synthesis of fatty acids. It also improves thermogenesis which is a heat production in liver and white adipose tissues. (18)

The study shows that cocoa has positive effects on cardiovascular health. It has high content of flavonoids such as catechin, procyanidin and epicatechin. It has antioxidant properties that helps to prevent cell damage that helps to strengthen hart. It helps to promote endothelial functions and stimulates HDL cholesterol. It also prevents the fatal blood clot formation that results in cardiac failure and stroke. It has anti-platelet effects also. It prevents proliferation of athrombosis and atherosclerosis that are the causes of cardiovascular ailments. (19) (20) (21) (22) (23) (24) (25)

The intake of cocoa has antidepressant activities on physiological processes. The study shows that the flavonols in cocoa assist in enhancing mood, promote cognitive activities and counteract depression. It has neurochemical phenylethylamine that promotes enhance feelings of contentment and enhance aphrodisiac effects. (26) (27)

The study shows that intake of cocoa husk provides therapeutic properties in curing chronic constipation as well as problems related to bowel functions. The daily intake of cocoa products helps to promote the functions of bowel and its movements. (28) (29)

Carcinogenic  mechanisms  have  been  associated  with ROS, and different population  studies have shown that regular intake of antioxidant-rich  foods confers protec tion  against  several  types  of  cancer.  Therefore, diets including high dosages of cacao antioxidants result in a decreasing  presence  of ROS, avoiding their  genotoxic and epigenetic carcinogens and inhibiting the complex processes  leading  to  cancer  development.

Copper helps to cure deficiency of copper. The study shows that cocoa helps to improve the level of hemoglobin, count of leucocyte and copper. It prevents the disease related to copper deficiency such as neutropenia, anemia and leukopenia. (32) (33)

Cocoa is rich in flavonol content that helps to lower the effect of UV induced erythema and lower scaling and skin roughness. It promotes hydration, elasticity and density of skin. Cocoa has epicatechin that helps to elevate oxygen saturation of hemoglobin, contributes endogenous photo-protection and stimulates the blood flow in dermal tissues. (36) (37) (38) (39)

Inﬂammation is a complex process, and several bio markers are used to identify chronic inﬂammation in humans. Evidence suggests that cocoa can effectively modify the inﬂammatory process. It is reported that cocoa monomeric catechins and oligomeric procyanidins have a signiﬁcant anti-inﬂammatory effect. The mechanism involved seems to be through inhibition of a neutrophil oxidative burst, thus reducing adhesion molecules expression. Cocoa ﬂavanols in high doses suppress the level of plasma leukotrienes, which contribute to inﬂammation in asthma and bronchitis. These compounds are able to modulate eicosanoids synthesis and effects, as well as mediate a series of events leading to acute inﬂammation.