Trending
You are at:Home»Herbs and Spices»Dodder facts and health benefits 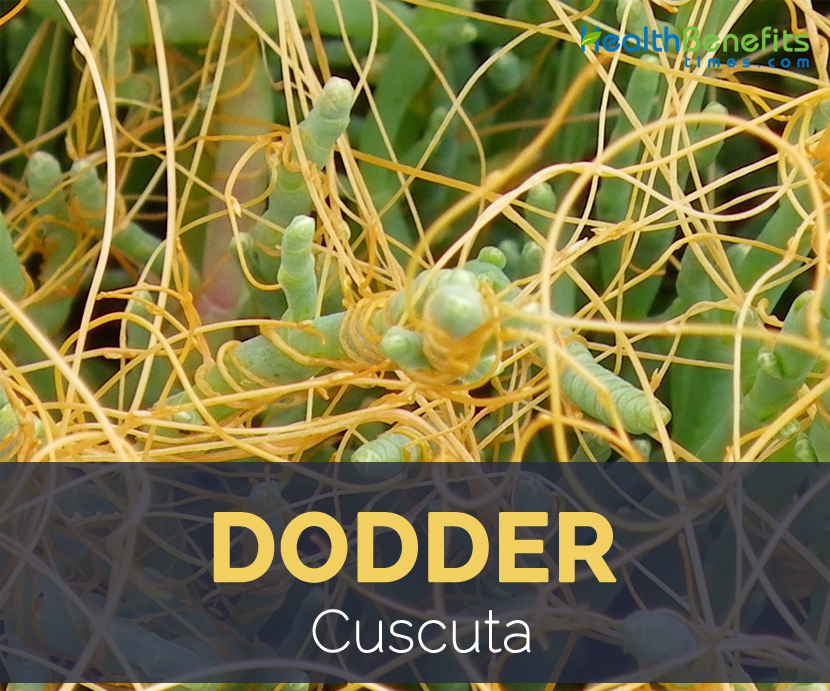 Dodder scientifically known as Cuscuta (pronunciation: /kʌsˈkjutɑː/) is classified as a member of the Morning-Glory Family (Convolvulaceae) in older references, and as a member of the Dodder Family (Cuscutaceae) in the more recent publications. Dodder is a leafless, delicate, yellow colored total stem parasite seen entangled on shrubs and hedges along the roads and railway tracks. Apart from doddle it is also known as Devil’s Guts, Dodder, Hellweed, Love Vine, devil’s gut, beggar weed, strangle tare, scald weed, dodder of thyme, greater dodder and lesser dodder. Dodder parasitizes various kinds of wild and cultivated plants, and is especially destructive to alfalfa, lespedeza, flax, clover and potatoes. Ornamentals attacked included chrysanthemum, dahlia, helenium, Virginia-creeper, trumpet-vine, English ivy and petunias. Dodder can be recognized even by the smell of the flowers, these possess a penetrating sweet perfume like smell that is particularly strong in the cool evening air.

Dodder is actually a parasitic annual plant and has typical parasitic adaptations, it does not have any leaves or roots and devoid of the plant pigment chlorophyll, it is therefore absolutely dependent on the host plant for its survival. The dodder uses its parasitic suckers to suck nutrients and to climb over other plants. It is thus a climbing plant and has to grow close to the host plant. Once it reaches a plant, the dodder twines itself and penetrates the stem of the host with the suckers obtaining nutrients and growing on the plant. It grows in a wide range of environmental conditions and on a wide variety of host plants including crops, sown pastures, vegetable, weeds and some tree species. Dodder has no true roots and the leaves are like scales on the stems.

Stems are bright yellow (golden) to green, often completely without chlorophyll. They are smooth, hairless, thread-like about 1 mm thick and branched, twining tightly on host plants. They attach by small suckers which penetrate the stems and leaves of the host plant. Dodder is leafless or has small, scale like, triangular leaves about 1/16 inch long. Bell-shaped flowers are cream colored and have 3–5 petals and about 1/8 inch long; and 3-4 mm in diameter. They usually occur in clusters but occasionally are borne singly. Flowers range in color from white to pink to yellow to cream. They are formed in clusters along the stems between spring and autumn.

Dodder plant produces globular capsules 3–4 mm in diameter containing up to 4 seeds. Seeds are minute and produced in large quantities and contain rough coats and vary in size depending on species. Seeds are brown, yellow or grey and 1–2 mm in diameter. The seeds are somewhat pear-shaped and similar in size to clover and lucerne seed.

Dodder plant is considered to have originated from East Asia; the plant is grown in China. The genus is found throughout the temperate and tropical regions of the world, with the greatest species diversity in subtropical and tropical regions; the genus becomes rare in cool temperate climates, with only four species native to northern Europe.

Research show that its flavonoids have estrogen-like effects. Besides, it seems to have a protective role in human sperm. That’s to say, its androgen-like action can protect the reproductive organs of male animals, encourage the testicular development and the production of testosterone, and prevent the spermatogenic cell from oxidative damage and apoptosis.

2. Effect on bone and cartilage

Research has found that dodder seeds can improve bone density and promote hyaline cartilage repair. In vitro culture of osteoblasts in its water extract shows that it can increase calcium matrix of osteoblasts, promote the proliferation, increase the alkaline phosphatase activity, prevent osteoclast survival and encourage the apoptosis of osteoclast.

Experimental research has found that it has the ability to prevent certain cancer cells and thus reduce the incidence of cancer.

After its polysaccharide was given to mouse models of diabetes by gavage administration, the improvements included considerably decreased blood glucose levels, increased body mass, and increased glycogen content. All indicates that it has anti- diabetic effect.

Animal research showed that the right quantity of dodder seeds can increase the wet weight of thymus and immune organ spleen and thus enhance the phagocytosis of peritoneal macrophage, promote the proliferation of spleen lymphocytes and induce the generation of interleukin. As a result, it effectively enhances immunity.

After the mouse models of chronic liver injury were fed with its decoction, the improvements were considerably decreased alanine aminotransferase (ALT) and aspartate aminotransferase (AST) in serum, increased SOD, and noticeably improved liver tissue injury.

It can reduce the degree of opacity of the crystalline lens and delay and treat galactose-induced cataract. More prominently, it has no adverse effects on growth and development.

Its can increase resistance to cerebral ischemia, enrich heart blood, tonify kidney, make up a deficiency, help bodybuilding, decrease urine output and the frequency of urination, and so on. 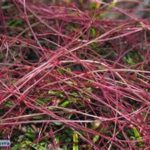 Cuscuta epithymum commonly known as Dodder, Hellweed, Strangle-tare is a parasitic plant assigned to the Cuscutaceae or Convolvulaceae family, depending on the taxonomy. It is actually a red-pigmented, not being photosynthetically active. It has a filiform habit, like a group of yarns. Its leaves are very small, like flakes. Its flowers, disposed in little glomerules, have a white corolla, with the androecium welded to the corolla.

Cuscuta californica is also a species of dodder known by the common names Chaparral dodder and California dodder and is native to western North America. Cuscuta californica is a parasitic vine which climbs other plants and takes nourishment directly from them via a haustorium. It bears tiny white flowers which are only about 3 millimeters wide, and fruits which are even smaller. 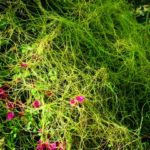 Cuscuta chinensis Lam. is a parasitic plant in the family Convolvulaceae. It is native to China and was first described in 1786. It is also a parasitic vine that depends upon host plant for foods. 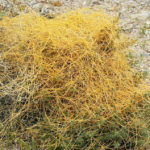 Cuscuta denticulata commonly known as desert dodder or small-toothed dodder is a thin, yellow to orange, parasitic annual vine in the morning glory family (Convulvulaceae), native to the deserts of Southwestern America. It parasitizes the host by sending small, short-lived rootlets (haustoria) into its tissues, from which it absorbs moisture and nutrients. 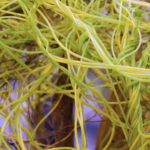 Cuscuta japonica, commonly known as Japanese dodder, is actually a parasitic vine. It has been listed by the State of California as a toxic weed. 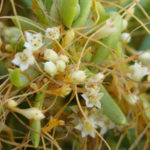 Cuscuta pacifica commonly known as goldenthread is native to coast of western North America from British Columbia to Baja California. It is a slender annual vine with yellowish thread-like stems that wrap firmly around other plants. The leaves are reduced to tiny scales, and it possesses no roots because it is a parasitic plant. 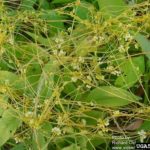 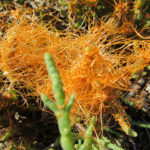 Cuscuta salina commonly known as salt marsh dodder is a slender annual vine extending yellowish thready stems to wrap tightly around other plants. It is native to western North America, where it lives in seasonal alkaline or saline habitats such as vernal pools and salt flats. 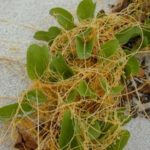 Cuscuta sandwichiana is a parasitic vine of the genus Cuscuta that is widespread to the Hawaiian Islands. It parasitizes a wide variety of indigenous, endemic and introduced plants on all of the main Hawaiian islands. It grows in coastal areas with sandy soils from sea level elevation to 975 feet. 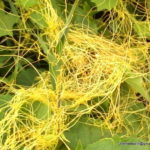 Cuscuta – Lam. Commonly known as Chinese Dodder is actually a perennial plant in the family Convolvulaceae. Flowers are hermaphrodite. It can grow in semi-shade (light woodland) or no shade. It prefers moist soil. 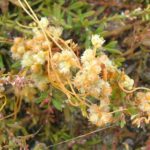 Cuscuta cassytoides commonly known as African dodder is parasitic on herbs and also on woody plants such as Coffea of which it might become as pest. Stems are coarse, often ‘with purple spots’. Flowers are 2.5-4 mm long, sub sessile, in few-flowered cymules arranged in paniculate spikes. 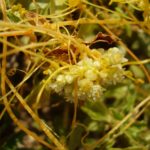 Cuscuta campestris commonly known as field dodder, golden dodder, large-seeded alfalfa dodder, yellow dodder and prairie dodder, is a parasitic plant which belongs to the family Convolvulaceae. It was formerly classified in the family Cuscutaceae. It is native to central North America and is a parasite of a wide range of herbaceous plants.

Cuscuta europaea also known as the greater dodder or European dodder, is a parasitic plant native to Europe and belongs to the family Convolvulaceae, but was formerly categorized in the family Cuscutaceae. It grows on other herbaceous plants, including garden plants such as Coleus and Impatiens. It is a notable parasite of lucerne. 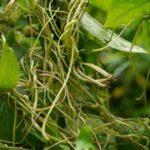 Cuscuta reflexa commonly known as the giant dodder is actually a parasitic plant which is leafless twined sprawling thin vine that grows over a host plant. This species is used in producing traditional medicines for the treatment of headache, labour pain, bone fracture, fever, rheumatism etc.

Cuscuta megalocarpa – Rydb. commonly known as Bigfruit Dodder is a perennial plant in the family Convolvulaceae. It grows on various shrubs and herbs, also occasionally found on cultivated crops.

Cuscuta approximata is actually a species of dodder commonly known as alfalfa dodder. It is native to Eurasia and Africa, but it can also be found in North America, where it is an introduced species and uncommon harmful weed. It is a parasitic vine that climbs other plants and takes nutrition right from them via a haustorium. The dodder resembles a pile of light yellow to orange-red straw wrapped tightly around its host plant. It is mostly stem; the leaves are normally reduced to scales on the stem’s surface.

Cuscuta umbellata also known as flatglobe dodder is a parasitic plant in the morning glory family (Convulvulaceae) found in the Sonoran Desert of the southwestern United States. After summer monsoon rains, it spreads over the host plant in tangled masses of orange strings.

Other Traditional uses and benefits of Dodder

Side Effects and Considerations

Dodder seed extract is natural and generally safe. The herb, however, is very powerful and each individual should take the correct dosage. No side effects have been reported, if the extract is taken as recommended by an herbalist.

No research has been carried out to evaluate the interactions between dodder seed and pharmaceuticals. Talking to a physician before getting started with a dodder seed male enhancement program is the safest approach.