Trending
You are at:Home»Fruits»Feijoa – Acca sellowiana 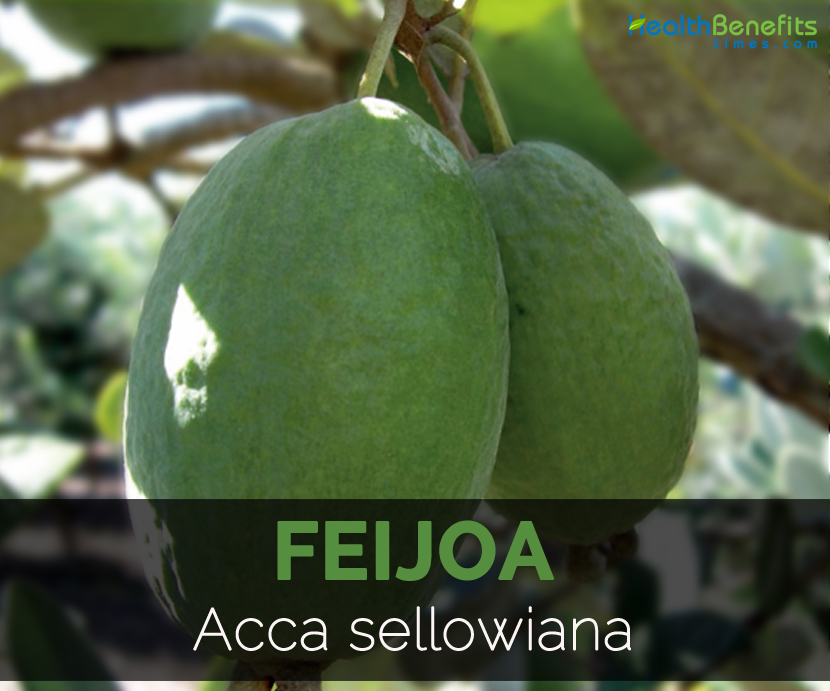 The Feijoa (Acca Sellowiana) is a tree native to Brazil, South America, which is evergreen, perennial shrub and small tree classified in plant family Myrtaceae. Feijoa are commercially valuable and are cultivated in New Zealand and California. This plant is usually grown for its sweet and aromatic fruits. The plant has pale gray bark with greenish gray leaves. Feijoa plant lives for more than 45 years. There are 21 varieties of Feijoa such as Apollo, Choiceana, Coolidge, Edenvale Improved Coolidge, Edenvale Late and so on.
Feijoa or pineapple guava also called guavasteen, pineapple guava or New Zealand Banana. It has got various names such as Feijoa in Japanese, faiijo in Hindi, fei yue guo in Chinese, feykhoa in Russian, Ananasguave or Feijoa in Dutch. The fruit is oval in shape and about the size of chicken’s egg which is about 1 to 3 inches in length and 0.5 – 2 inches in diameter. They have lime green waxy skin, jelly textured seed pulp which is encircled by soft and cream colored flesh. The fruit has tart and strongly sweet aromatic flavor. The taste of the fruit is like the combination of strawberry, guava and pineapple or lemon or quince. The texture of the peel is rough and thin. The fruit weighs about 50 g. Feijoa is available during the autumn season. When the fruit got ripen, it drop from the tree or is picked from the tree directly.
100 g of Feijoa contains 61 kilo calories. According to USAD major nutrients contain in this fruit are Vitamin C 32.9 mg. (36.56%), Total dietary fiber 6.4 mg.(16.84%), Carbohydrate 15.21 mg.(11.70%), Vitamin B9 23 µg. (5.75%), Vitamin B6 (Pyridoxine) 0.067 mg.(5.15%), Vitamin B5 0.233 mg (4.66%), Copper 0.036 mg (4.00%).

Fejioa is an evergreen tree which is much branched growing from 1 to 5 meters high having reddish grey bark and cylindrical trunk which appears to be rough and flaky. The tree bears elliptical to ovate leaves which are shortly petiolate, opposite having entire margin and obtuse apex rounded at base. Leaves measures 3 to 8 cm long, 2 to 4 cm wide. Upper surface is glossy and dark green and lower surface is tomentose and silvery white. The tree bears attractive flowers in pinkish red color. Flowers are solitary in lowest two or four leaf axils and measures 3 to 4 cm across. Petals are broad elliptic to spoon shaped, reflexed and whitish having red center. There are numerous stamens measuring 2.5 cm long having yellow anthers. Flowers are then replaced by oblong to ovoid fruit measuring 5 to 8 cm by 3 to 6 cm diameter. The texture of the skin differs from smooth to rough enclosing a thick and white, sweet to subacid flesh. The translucent pulp is enclosed with numerous small seeds in oblong shape. The climate preferred by Fejioa tree is mild summers and cool winters to bear fruit.

Fruit measuring 5 to 8 cm long by 3 to 6 cm diameter, is oblong to ovoid in shape having persistent calyx segments complied to apex. It has waxy skin in blue or grayish green or dull blue to green color. The texture of the skin varies from rough to smooth. The fruit possess long lasting perfume. Flesh of the fruit is white, thick, granular and translucent which is enclosed with seeds. The taste resembles the combination of guava and pineapple or strawberry and pineapple. There are about 20 to 40 small seeds in oblong shape which is hardly noticeable.

Botanically known as Acca sellowiana, this plant is native to regions of South America including Brazil, Argentina and Colombia. Besides its sweet fruit, it is also cultivated for ornamental purposes. Fruit are ellipsoid in shape and is green in color. Due to the impressive supply of nutrients and unique flavor, it is used for various culinary applications and also used as an ingredient in desserts, smoothies, chutneys, cocktails and stewed fruit dishes. Feijoa provides numerous health benefits such as improvement in digestion, assist weight loss, boost immune system, lower cholesterol levels, decrease blood pressure, increase bone strength, balance metabolism, optimize uptake of nutrients, regulate blood sugar levels and stimulate cognitive function.

Usually Crohn’s disease and ulcerative colitis are referred as inflammatory bowel disease. Crohn’s disease affects all digestive systems whereas ulcerative colitis affects large intestines. The investigation shows the capability of hydrophilic fejioa fraction for modulation of autophagy by TLR2 with the use of IBD cell lines. Results show that extracts of Feijoa is effective to manage inflammatory bowel disease in the patients.

The antibacterial activities were evaluated of an aqueous extract from Feijoa fruit. The extract was tested against Gram positive and Gram negative bacteria with the use of broth dilution test on whole blood leukocytes of humans and isolated neutrophils which is based on chemiluminescence assay. Experiment shows that an extract helps to inhibit the growth of bacteria. Results shows that Feijoa possess antibacterial properties which is used to counteract bacteria.

The juice extracted from Feijoa is used to ascertain anti-inflammatory activities with the use of carrageenan induced paw edema test. In vitro test is involved to find out the effects on release of superoxide anion from neutrophils in human blood. The juice was analysed with the use of high performance liquid chromatography method. It identifies the chemical compounds such as quercetin, eriocitrin, syringic acid, ellagic acid, pyrocatechol, gallic acid, catechin, rutin and eriodictyol. Results showed meaningful anti-inflammatory activity in fruit juice that helps to inhibit neutrophils basal activity in all experiments. It lowered edema significantly and inhibits O2 production during experiment which make sure the anti-inflammatory effect of Feijoa juice.

Dietary fiber is well-known for its ability to provide relief from constipation. An average person requires half of the dietary fiber regularly. Women under 50 years of age should intake 25 grams of fiber per day and about 38 grams for men. For children, the recommended intake of dietary fiber is 14 g/1000 Kcal. One Feijoa provides ¼ of the daily requirement of dietary fiber. Fiber is essential for our good gut bacteria. When those bacteria are healthy and strong then nutrients in food could be absorbed properly. In addition, healthy gut bacteria help to protect lining of gut wall.

Feijoa has high content of Vitamin C which is associated with prevention of flu and colds. Antioxidants found in Feijoa assist to eliminate free radicals from blood. It lowers oxidative stress in lining of arteries. An inflammation oxidation is the main cause for atherosclerosis, heart disease and buildup of plaques. Feijoa has healthy amounts of potassium which is known as electrolytes that assist in regulation of muscle functions in the body. Potassium influence the smooth function of muscles which allows arteries dilation as well as contraction as needed. Potassium plays a vital role in flowing of blood.

Study shows that an extract of Feijoa showed antidepressant effect in mice. Feijoa has high content of folate which is helpful in treating depression. The deficiency of folate is associated with increasing chances of depression. Folate helps to neutralize metabolite known as homocysteine. It activates homocysteine which could interfere with hormones such as serotonin that assist in regulation of mood and have become a target of most pharmaceutical antidepressants.

Feijoa possess antimicrobial and antibacterial properties. It contains adequate amounts of minerals and vitamins so its regular consumption provides boost to immune system. Vitamin C assists in stimulation of white blood cells production which acts as the first line of defense of the body. It also contains antioxidant that helps to eliminate free radicals. A single serving of Feijoa provides more than 50% daily recommended vitamin C.

The foods with high content of potassium are vital for the people suffering from high blood pressure. They have high chances of cardiovascular disease, strokes and atherosclerosis. Potassium acts as a vasodilator which helps to lower tension in blood vessels as well as arteries and also eases the strain on cardiovascular system.

Vitamin B are essential for the overall body functions and metabolic activities such as synthesizing red blood cells and proteins, stimulating nervous system function, directing hormone production and generating energy within cells. Favorably, Feijoa has balanced levels of vitamin B.

You will discover five kinds of feijoa fruit generally known as of yet. 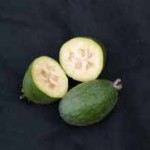 This is usually a huge fruit, along with pretty rough skin. Ellipsoid to Obovoid in form. 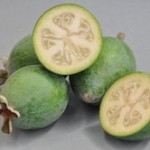 Fruit is within moderate to big in dimensions, Oblong to obovoid in shape. 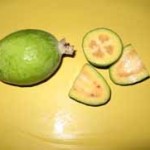 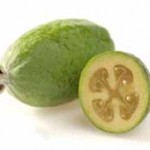 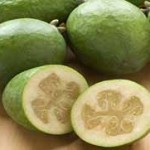 You can recognize a feijoa fruit by its blue/green skin that varies in texture from smooth to coarse. Additionally, feijoas are oval in shape and are approximately one inch to 3 1/2 inches in length. Even though you shouldn’t consume the skin of the feijoa fruit raw, you may utilize it just as one component in preserves. Whenever you cut into a feijoa, you will notice thicker, succulent flesh which is possibly light yellow or even white in color. Furthermore, roughly thirty seeds can be found inside the flesh. These kinds of seeds are extremely tiny and could be consumed combined with the flesh. The feijoa fruit can also be recognized for its aromatic as well as long-lasting fragrance. You can buy feijoas at bigger grocery store chains and also at niche or even premium vegetable and fruit stores. When choosing a feijoa, ensure that the fruit produces a pleasing fragrance and, whenever squashed, is almost soft to the touch. Once bought, make use of your feijoa as quickly as possible since you can keep a ripe feijoa in your house for just as much as 3 days. You should also chill ripe feijoas.

Because feijoas have got a distinctive flavor, they’re generally utilized in fruit salad recipes which call for the particularly sweet flavor. They’re also utilized just as one component in puddings and also pies, and therefore are superb whenever utilized to create jams and also jellies. Particular commercial manufacturers also have mixed feijoas together with black teas to make a satisfying mouthwatering fruit tea. Feijoas may also be consumed raw, so long as you initially eliminate the external skin. You may also create a quality tasting fruit juice through the feijoa. Due to their fairly sweet flavor, feijoas provide a nutritious alternative to many other more caloric or even fatty sweet desserts and snacks. Feijoas likewise have a tasty option to the more traditional and common fruits utilized in numerous recipes. Due to these reasons, it really is worth tinkering with this fruit in cooking to discover its numerous varied factors.

Feijoa fruit discovers its place in kitchen area, dining room table, as well as in the dressing unit. Discover its distinct uses below: