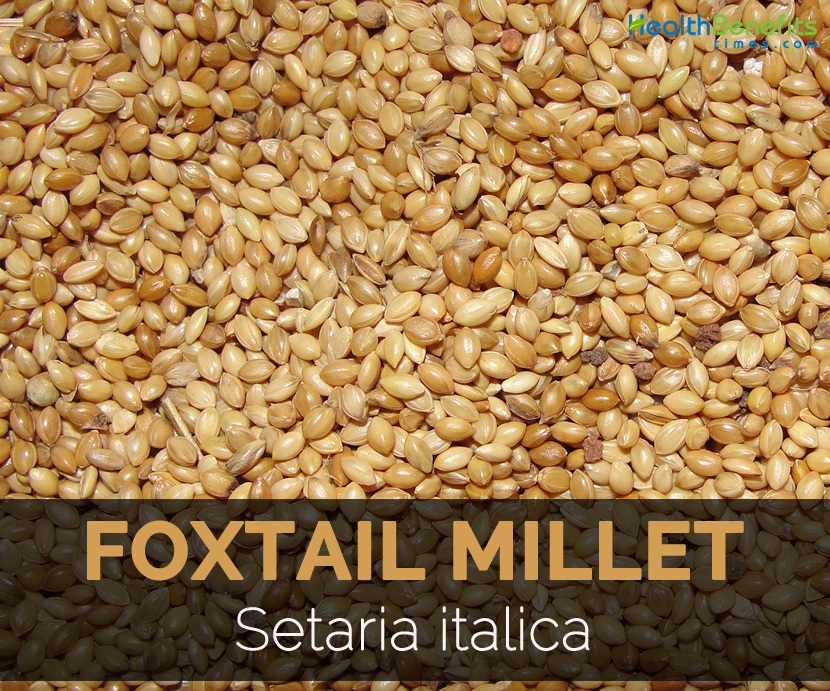 Setaria italic with many common names including Chinese Millet, Foxtail Bristle Grass, Dwarf Setaria, Foxtail Millet, Hay Millet, German Millet, Giant Setaria Hungarian Millet, Japanese Millet, Italian Millet, Red Rala, Liberty Millet and Hungarian millet is a grass species which is used as a crop. Foxtail millet is adapted to well-drained soils. Foxtail millet is an annual grass whose plants reach an average height of 60-150 cm. The seeds are convex oval or elliptical and light yellow to brown, rusty or black in color. It is known as Bertia in Hindi; Panico Degli Uccelli in Italian; Awa in Japanese; Sekui in Malaysia; Pabbio Coltivato in Switzerland; dzo in Korean; Morap in Russian and Mijo De Italia in Spanish.

It is an annual grass with erect and robust culms. It grows upto the height of 60-150 cm. Leaves are 20-40 cm long and 1.5-3 centimeters wide with lanceolate shape. Leaf sheaths are small, glabrous or pubescent and 1-3 mm. Leaf lamina is dense, erect or pendent, lobed and 6-40 × 0.5-5 cm. It has elliptic, ovate or subglobose spikelets of 2-3 mm.

Foxtail millets are rich in calories that provide energy and strength to the body to perform activities. It is widely cultivated in India, Africa and China. It is considered as the perfect substitute for the healthy diets.

Vitamin B1 slows the development of Alzheimer’s disease. It could be treated with an intake of 100 mg supplements of Vitamin B1. The trial studies are still carried out for the determination of the mechanism due to which it occurs.

Vitamin B1 helps to enhance the concentration and memory power. It helps to manage the nervous ailments such as Bell’s palsy and multiple sclerosis. It is also called morale vitamin which provides a positive impact on nervous system and supports mental perspective.

Vitamin B1 acts as an antioxidant which slows down the process of age spots, wrinkles and other age related problems that has negative effect on the organs.

Iron assists in the brain development. It supplies oxygen to the brain, as it uses about 20% of blood oxygen. Iron is directly associated with the brain functions. The adequate amount of blood if received by the brain helps to promote the cognition and prevents Alzheimer’s disease and dementia. Due to this the adequate amount of iron is essential for the brain oxygenation. (2)

Protein helps in the functions of nervous system smoothly. The activation of nervous system triggers the response of relevant reactions. The receptor sites consist of protein complex  which helps to transfer the nerve signals to the cells and manage the central nervous system. (4)

Protein is essential for the maintenance of hair health and prevents it from damage. Protein has a vital role in the growth of hairs. Due to the beneficial effects, the hair care products use the protein in it. (5) (6)

Proteins support and strengthen the tissues such as skin which is tears constantly. Collagen is considered as the vital protein that strengthens the tissues, cells and organs that is essential for the revitalization. The high presence of collagen protein found in the body provides wrinkle free, healthy and youthful skin. (7) (8)