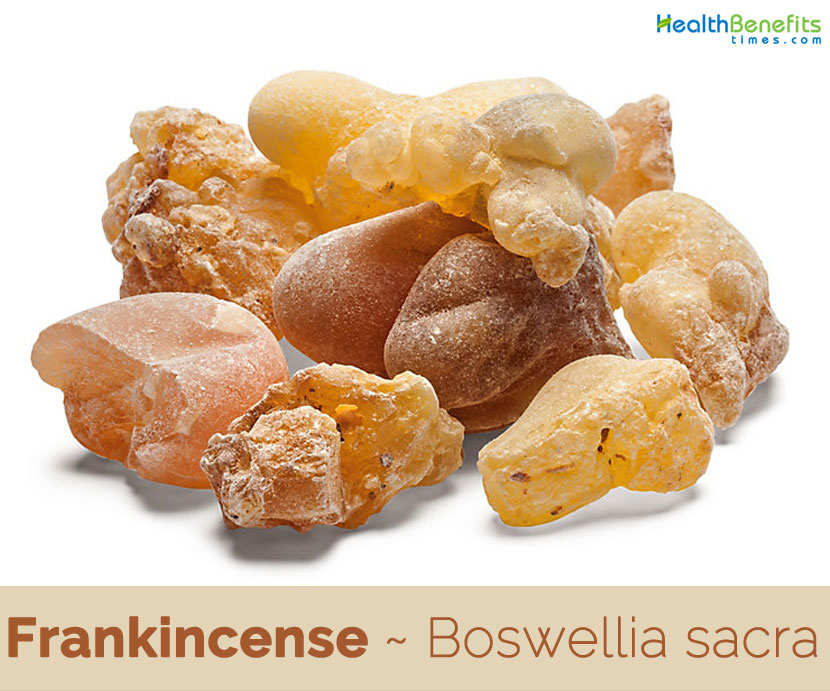 Boswellia sacra commonly known as frankincense or olibanum-tree are a tree in the Burseraceae family. It is the primary tree in the genus Boswellia from which frankincense, a resinous dried sap, is harvested. The plant is native to the Arabian Peninsula (Oman, Yemen), and northeastern Africa (Somalia). It typically grows in the dry, mountainous regions of India, Africa and the Middle East. Some of the popular common names of the plant are Bible frankincense, Frankincense, Incense, Frankincense tree, Olibanum tree and Omani frankincense.  The word ‘frankincense’ comes from the French term for ‘pure incense’. The trees produce high quality resin for just three years and then need time to rest.

Frankincense is a small woody deciduous evergreen tree that grows about 2 to 8 m (6 ft. 7 in to 26 ft. 3 in) tall. Trees are normally multi-stemmed, but can also have a single trunk. All parts of the tree are highly resinous. The plant is found growing on rocky slopes, ravines, in arid woodland, on the steep, precariously eroding slopes. It grows well in well drained to dry and alkaline soil. Its bark has the texture of paper and can be removed easily.  The trees cling to boulders or rock-faces by means of a cushion-like swelling at the base of the trunk. This swollen base helps to stabilize the tree and is most developed in those growing on very steep or exposed rocks.

Tree has a well-developed trunk, often somewhat swollen at base, or branched almost from ground level. Individual trees growing on steep slopes tend to develop some buttressing that extends from the roots up into the base of the stem. This forms a sort of cushion that adheres to the rock and ensures certain stability. Bark is pale brown with a flaking papery outer layer over a thick reddish-brown resiniferous layer.

Leaves are oblanceolate in outline, 10–25 cm long, including a less than 10 mm long petiole. Leaflets are lanceolate, oblong, elliptic or broadly ovate, up to 5 -7.5 cm long and 2 -3.5 cm wide, obtuse to sub-acute at the apex, broadly cuneate or truncate and often asymmetric at the base. Margin is often somewhat undulate, usually crenate, upper surface is densely hirsute to sub glabrous, lower surface is much paler, hirsute to densely tomentose with a prominent network of veins. The new leaves are covered with a fine down.

Fertile flowers are followed by 3 -5 celled capsules that are 8–12 long and 3.5–9 mm wide, narrowly to broadly pear-shaped and glabrous. Capsules consist of seeds that are 4-pointed with narrow apical and basal horns and broader lateral points, often surrounded by a persistent wing.

The trees start producing resin when they are about 8 to 10 years old. The resin is extracted by making a small, shallow incision on the trunk or branches of the tree or by removing a portion of the crust of it. Resin is drained as a milky substance that clots in contact with air and is collected by hand. 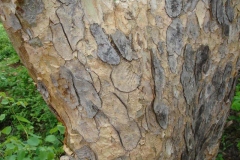 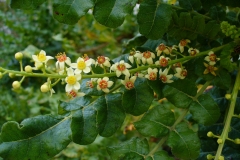 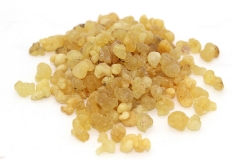 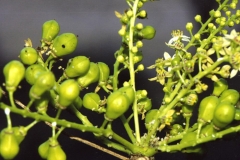 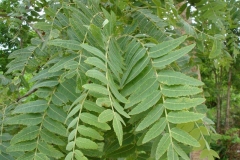 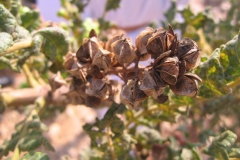 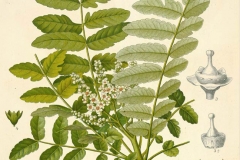 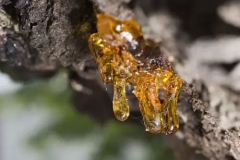 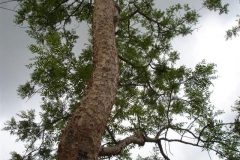 Frankincense has anti-inflammatory effects that may help reduce joint inflammation caused by osteoarthritis and rheumatoid arthritis. Researchers believe that frankincense helps to prevent the release of leukotrienes, which are compounds that can cause inflammation. Terpenes and boswellic acids appear to be the strongest anti-inflammatory compounds in frankincense. In humans, frankincense extracts may help reduce symptoms of osteoarthritis and rheumatoid arthritis. In one recent review, frankincense was reliably more effective than a placebo at reducing pain and improving mobility. (1), (2), (3), (4), (5), (6)

Frankincense may also help fight certain cancers. The boswellic acids it contains might prevent cancer cells from spreading and may also prevent the formation of DNA in cancerous cells, which could help limit cancer growth. Moreover, some test-tube research shows that frankincense oil may be able to distinguish cancer cells from normal ones, killing only the cancerous ones.

Test-tube studies recommend that frankincense may fight breast, prostate, pancreatic, skin and colon cancer cells. Research indicates that it may also help reduce side effects of cancer. When people getting treated for brain tumors took 4.2 grams of frankincense or a placebo each day, 60% of the frankincense group experienced reduced brain edema an accumulation of fluid in the brain. (7), (8), (9), (10), (11), (12), (13), (14), (15), (16)

Traditional medicine has used frankincense to treat bronchitis and asthma for centuries. Research suggests that its compounds may prevent the production of leukotrienes, which cause your bronchial muscles to constrict in asthma. Likewise, a daily frankincense dose of 1.4 mg per pound of body weight (3 mg per kg) improved lung capacity and helped reduce asthma attacks in people with chronic asthma. (20), (21), (22)

Frankincense may help prevent bad breath, toothaches, cavities and mouth sores. The boswellic acids it provides appear to have strong antibacterial properties, which may help prevent and treat oral infections. In one research, frankincense extract was effective against Aggregatibacter actinomycetemcomitans, bacteria which causes aggressive gum disease. (23), (24), (25)

Since frankincense acts as an antiseptic, the oil can kill bacteria on other surfaces. Outside of human health, the benefits of frankincense also include home remedy solutions. People have actually used the oil for cleaning their house. Homeowners have treated the substance as a cleaner for the kitchen countertop and toilet seat. Oil, however, isn’t exactly cheap, so this would be a viable although expensive method of good housekeeping.

Frankincense helps to kills dermal bacteria. It also promotes skin elasticity, thus creating smooth skin complexion and minimizing wrinkles and stretch marks. If you are planning to take frankincense for healthy skin, then we recommend it in combination with a collagen supplement or bone broth diet. You can also use frankincense oil by placing a few drops in your lotion. You can do the same with shampoo for promoting vibrant hair. Recently, people are also turning to frankincense oil for treating acne and severe pimple breakouts.

Frankincense may also act as a hormone balancer. The oil helps reduce symptoms associated with menopause. More specifically, research show that it reduces salivary estrogen levels in peri-menopausal women. Though the study related to women, men should take notice as well. After all, estrogen production in males has been linked to testosterone decline and weight gain. Another study actually showed that frankincense oil increases testosterone production and sperm motility in male rats.

A stressed body cannot unwind for the day and hit the sack. Inflammation also causes pain and great discomfort, thus making it increasingly difficult to drift off to dreamland. Natural Medicine Journal revealed that frankincense and a number of other natural essential oils have great anti-inflammatory effects. This is important because previous studies have found links between inflammation and sleep loss.

Frankincense has been used in religious ceremonies and as anointing oil for thousands of years, mainly in the Middle East. It has spiritual roots, and when inhaled as a vapor in aromatherapy is supposed to have stress-relieving properties. It is also supposed to be a natural sedative, helping to induce a feeling of relaxation and reduce symptoms of anxiety and stress.

Frankincense has nonacid part that belongs to the gum and it has reliever and sedative function and in high dose can lower the blood pressure mainly in treatment of hypertension patient. High blood pressure is one of the leading causes of heart disease that known as number one killer in the world.

Boswellic gum or frankincense has been used for the treatment of diabetes since it has anti-hyperglycemic effect that can maintain normal blood sugar level within the blood according to study that reported by Adrian in 1998.

By lowering the blood pressure and maintain healthy blood vessel, frankincense has been proven to reduce the risk of heart disease by almost 20%. It is really good news to people who loves to use this frankincense oil as natural remedy for their health problem.

Research conducted in Egypt showed that HCV infected patient who took frankincense daily supplement treatment for 18 months has noteworthy improvement of reducing this disease. Frankincense is also effective to prevent the hepatitis virus infection to the body.

Some anti-aging product include frankincense as their ingredients since it has been proven can promotes collagen production and rejuvenating new skin cell that may aids in young and firm skin.

As frankincense can be consumed in a variety of ways, its optimal dosage is not understood. Present dosage recommendations are based on doses used in scientific studies.

Most studies use frankincense supplements in tablet form. The following dosages were reported as most effective:

Aside from tablets, studies have also used frankincense in gum for gingivitis and creams for arthritis. That said, no dosage information for creams is available. If you’re considering supplementing with frankincense, talk to your doctor about a recommended dosage.