Trending
You are at:Home»Fruits»Gac fruit facts and health benefits 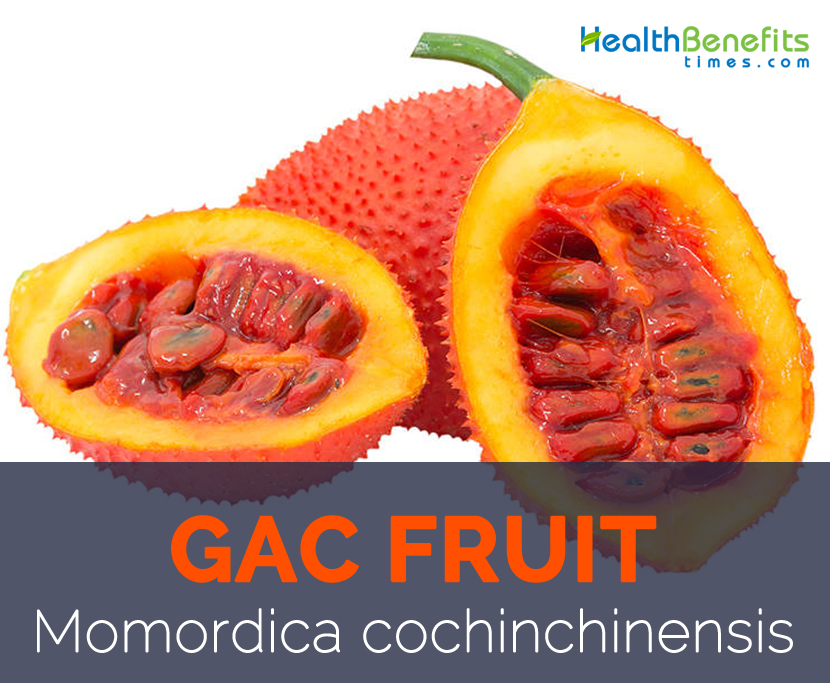 Gac Fruit, or simply Gac as it is referred to in Southeast Asia, is actually a tropical vine that is botanically classified as Momordica cochinchinensis. It is native to Southeast Asian region from South China to Northeastern Australia, including Thailand, Laos, Myanmar, Cambodia and Vietnam. It is also commonly known as Baby Jackfruit, Chinese Bitter Cucumber, Chinese Cucumber, Cochinchin Gourd, Gac, Giant Spine Gourd, Spiny Bitter Cucumber, Spiny Bitter Gourd and Sweet Gourd. It has an extremely short season, a mere two months long, but the fruit plays an important role in celebratory dishes as well as in natural medicine. Until recently, Gac has been a mystery outside of its native lands, but the juice has since been promoted as a dietary supplement because of its allegedly high phytonutrient content. It’s only harvested for two months each year (December and January) and is often used on special occasions in Vietnam as well as in traditional Chinese medicines. Traditionally, gac fruit, seed and its leaves have also been used as a traditional medicine in the regions in which it grows.

Gac fruit which is also known as Baby Jackfruit, Spiny Bitter Gourd, Sweet Gourd is actually a perennial twining, dioecious vine about 6 meters long. Vines can thrive in the warm humid tropics. It is hygrophilous, prefers sunny positions but is slightly shade tolerant. Plant prefers fertile organic, humus-rich and moist but well-drained soils, e.g. around ponds, rice-fields, and abandoned areas, and home backyards. They are often found growing on lattices or arbors in gardens and rural homes throughout Vietnam. The plant has an angular robust, glabrous stem and tuberous roots. Tendrils are simple and stout. Leaves are fairly large, alternate and deeply 3–5 palmately lobed with faintly dentate margins, cordate bases, glabrous, dark green above and lighter green below and petiolated. Flowers are monoecious, unisexual, solitary in leaf axils, white to ivory yellow. Female flowers have small bracts and a scabrous ovary while male flowers have broad reniform bracts, calyx tube is short with triangular lobes, and corolla has 5 yellow, ovoid-oblong petals and stamens. Flowering normally takes place from June to September. Plants survive for 10–12 years.

Gac is a bright-red fruit that grows as large as a cantaloupe and covered with short spines, hence it is sometimes referred to in English language as “Spiny Cucumber” or “Balsam pear”. Fruit are usually large, 13 cm in length and 10 cm in diameter, ovoid, globose to oval, with sharp pointed protuberances and a rigid peduncle. They are green when young turning orangey-red to dark red when mature and ripe. Each fruit weighs between 600 to 2500 g. Normally there are spines on the outside of the fruit and the interior is made of a fleshy pulp and seeds. The morphology of Gac fruit from outside to inside is a thick yellow mesocarp, followed by a red aril and a yellow core in the middle. The seeds inside the arils are flat, hard and brown or black. The Fruit has mild taste just like avocado. It’s only harvested for two months each year (December and January) and is often used on special occasions in Vietnam as well as in traditional Chinese medicines. Traditionally, gac fruit, seed and its leaves are used as a traditional medicine in the regions where it grows.

Gac fruit is considered to have originated from south China through Southeast Asia to north-eastern Australia. It is cultivated in southern China, Indo China and Thailand. But nowadays due to its higher nutritional value as well as health promoting benefits and amazing look and taste it is cultivated throughout the world with suitable environment.

Apart from their mild taste like Avocado, Gac fruit is a good source of nutrients, vitamins and minerals. Consuming 100 gram of gac fruit offers 17.4 g of Carbohydrate, 1.6 g of Total dietary Fiber, 2.1 g of Protein, 36 mg of Calcium, 0.3 g of Total Fat and 0.9 g of Ash.

Gac (Momordica Cochinchinensis Spreng or Muricia Cochinchinensis Spreng) is an indigenous fruit of Vietnam, commonly used as a colorant in traditional dishes. Recent studies showed that this fruit had a high carotenoid content, especially lycopene and Beta-carotene. These carotenoids are presently in high demand as they are natural antioxidants to prevent and treat cancers. Listed below are few of the health benefits of consuming gac fruit:

GAC fruit consist of several nutrients that are proven to prevent cancer and also slow down the multiplication of cancerous cells. It is also recently found that this fruit contains a particular protein that helps to prevent the proliferation of cancerous cells. Because of this specific reason GAC has earned the name “Heaven’s fruit”, as it has several methods of fighting cancer.

Gac fruit consists of abundance of iron as well as Vitamin C and folic acid, due to which it is quite beneficial for combating Anemia. It is suggested to find the cause of anemia and depending on the condition start consuming this fruit. Regular consumption of this fruit is extremely beneficial for overcoming the problems.

This fruit is quite beneficial for enhancing eyesight. The vitamins, beta carotene, and other substances present in this fruit helps in better one’s eyesight as well as prevent cataracts and other eyesight problems.

Depression is a serious medical condition in which a person feels very sad, hopeless, and unimportant and often is unable to live in a normal way. Many people around the world are suffering from this problem nowadays. Gac fruit when consumed frequently help to overcome this problem since it is rich in selenium, minerals, and vitamins, which are important to the nervous system, as well as help to combat depression.

Aside from the health benefits this fruit provides, it also inhibits aging and maintains one’s youthful appearance. It slows down the aging process as it encourages cellular activity as well as reduces stress. The vitamins and minerals this fruit contains help to maintain the skin’s youthful appearance. It encourages rebuilding of the collagen subcutaneous structures, as well as prevents the appearance of wrinkles.

Other Traditional uses and benefits of Gac Fruit

Side effects and cautions

Several parts of the fruit are toxic and should never be eaten. These include the skin, the outer rind, as well as the sides, which look like a cantaloupe due to their texture. Eating these parts doesn’t have deadly consequences but can make a human sick for several days. The edible parts are the big seeds, as well as the thin, soft and oily layer of pulp that surrounds them.