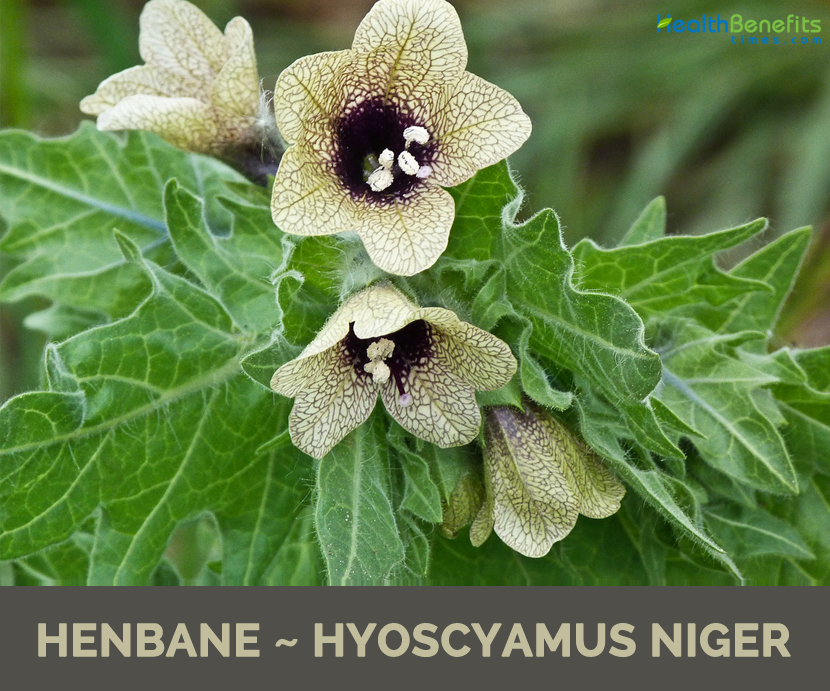 Henbane, whose botanical name is Hyoscyamus Niger, is actually a member of nightshade family or Solanaceae. This family consists of nearly 98 genera and some 2, 700 species of plant. Some of the plants belonging to this family are extremely toxic like Datura, Mandragora and Atropa belladonna (deadly nightshade). The plant is probably widespread to the Mediterranean countries and western Asia, but is now extensive in many parts of Europe, Asia, and North Africa. The species has been introduced and naturalized in North America, Brazil, Australia and many other countries. Other popular common names of the plant are Black henbane, Common henbane, Henbane, Hog’s-bean, Stinking-nightshade, Stinking nightshade, chupa mieles, tian xian zi, devil’s eye, Fetid nightshade and Jupiter’s bean.

The plant henbane derived its scientific name from the Greek terms ‘hys’ meaning pig and ‘kyamos’ meaning bean. Therefore, it is not surprising that the toxic plant is safe for consumption by pigs, while it is harmful for humans. It is used in Ayurveda and Unani medicine system for treatment of variety of diseases. It is also used as substitute of opium because of its hypnotic, hallucinogenic, narcotic, and sedative properties.

Henbane is an erect viscidity, hairy annual or biennial flowering, herbaceous and poisonous plant, belonging to Solanaceae family and is found all over the world. It is a biennial herb that grows up to 25-100 meter tall. The plant is found growing in waste ground, roadside, soil heaps, fields, church lands, ruins, mills, harbors, slopes, near road and sands by river. The plant prefers sandy to sandy loam soils with high organic matter but it does not perform well in sodic soils. The plant has branching taproot and sparsely branched, densely leaved, sticky, densely hairy stems. There are two forms of the plant, an annual and a biennial. The annual grows during the summer to a height of 30 to 60 cm (1 to 2 feet) and then flowers and sets seed. The biennial produces during the first season only a tuft of basal leaves, which disappear in winter and leave underground a thick fleshy root. The following spring, the plant produces a branched flowering stem, which is usually much taller and more vigorous than the flowering stems of the annual plants.

The leaves of the basal rosette are alternate and often have stalks almost as long as the blades. The stem leaves are alternate, shallowly lobed, and gray-green with conspicuous pale veins. Covered with short, sticky hairs, the leaves have a foul odor.

Flowers occur both at the ends of the stems in long, leafy spikes and singly in the spaces between the leaves and the stem. Each flower is composed of sepals fused into an urn shape and petals fused into a funnel shape with unequal lobes. The flowers are pale yellow with conspicuous purple veins and a purple throat. At their bases, the flowers are densely covered with long, glandular hairs. Black henbane flowers June through September, but the annuals tend to bloom later in the season than the biennials. The fruit is an egg-shaped capsule, or a dry fruit composed of more than one carpel that opens at maturity. The fruits are about one inch long, with hundreds of tiny seeds. The fused sepals loosely enclose the fruit and conceal it from view. A single plant can produce up to 8,000 seeds. The whole plant has a powerful nauseous odor.

Henbane is one of the herbs that are recognized for their amazing healing benefits. Though, there are sufficient quantities of poison available in this herb yet, is widely combined with other components to treat numerous health ailments. Listed below are few of the health benefits of Henbane

Henbane juice when mixed with vinegar and applied on forehead and shrine enables one to sleep in running high fever and helps to get rid of headache. Henbane is well known for its narcotic properties.

Henbane leaves tincture is prepared by soaking leaves in alcohol and olive oil. Use of this tincture mixed in hot bath water is considered effective in soothing the skin. Poultice of crushed fresh leaves applied on inflammation caused due to gout and sciatica assists in lessening the pain.

Drugs obtained from Henbane herb are vital for treating muscular contractions, irritating nerves and hysteria. Restlessness, nausea and vomiting are some adverse effects of henbane.

Henbane is vital in relieving pain that occurs due to muscle spasm, resulting from cold and tender bladder. Henbane leaves when applied on eyes calm inflammation of eyes. Henbane seed oil is useful in curing ear related ailments.

It impacts the nerve cells by relaxing them and making the person drowsy and at the same time it works to relieve from pain. This property of Henbane finds its usage in the treatment of Parkinson’s disease.

Tincture or juice of soft tissues present in stem can be used to calm irritated nerves, hysteria and irritant coughs. The herb is similarly useful in treating asthma, pertussis or whooping cough and sickness related to bowels. Henbane is affective in relieving pain that occurs due to kidney stones and abdominal cramps. This herb is also used to reduce urinary tract pain.

This herb is vital in relieving pain that occurs due to muscle spasm, resulting from cold and tender bladder. Henbane leaves applied on eyes calm inflammation of eyes. Henbane seed oil is useful in curing ear related ailments.

Traditional uses and benefits of Henbane