Trending
You are at:Home»Herbs and Spices»Black Cumin facts and health benefits 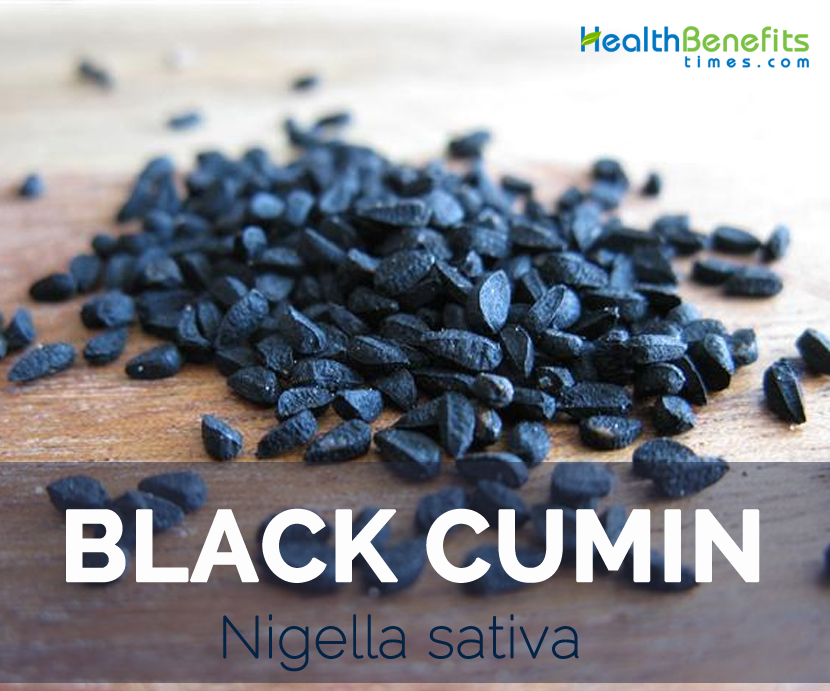 Nigella sativa also known as nigella or kalonji, often called black cumin, is an annual flowering plant in the family Ranunculaceae, native to south and southwest Asia. Black Cumin seed has been used in Middle Eastern folk medicine as a natural remedy for various diseases for over 2000 years. The prophet Mohammed is mentioned as saying in the Koran, “This black cumin is healing for all diseases except death.” The black cumin he was discussing to be Nigella sativa. It’s been used for centuries to treat everything from abscesses to herpes zoster. Due to its amazing power of healing, Black Cumin has got the place among the top ranked evidence based herbal medicines. Most of the therapeutic properties of Black Cumin seed are due to the presence of Thymoquinone which is a major bio active component (30%-48%) of the essential oil. Black Caraway, Black Cumin, Black seed, Black Seed flower, Edible Love-In-A-Mist, Fennel-Flower Nigella, Fitches, Nutmeg Flower, Onion Seed and Roman Coriander are some of the popular common names of Black Cumin.

Black Cumin plant offer inflated, ribbed, oblongoid, tuberculate capsule 6–16 mm × 5–12 mm, which is normally greyish-green while young and gradually turns to brown at maturity. These inflated capsule consists of numerous triquetrous to obpyramidal, rugose seeds that are white turning to black whenever exposed to air. Seeds normally have pungent bitter smell and have taste like a combination of onions, black pepper and oregano. Due to its distinctive smell and taste it has been used in several foods since ancient times.

History of black cumin is unknown, most probably in southwestern Asia or southeastern Europe. Its seeds were found in the tomb of the pharaoh Tutankhamun in Egypt. During ancient times, Nigella was already cultivated by the Jews, Arabs and Indians. Later, it was introduced into several countries of Europe, Asia, and Africa. The species, previously cultivated in Central Europe too, has lost somewhat of its economic importance. But now it is cultivated throughout the world due to its nutritional value as well as unique taste.

Nigella sativa, commonly known as Black Cumin, Black Seed, or Black Cumin Seed is native to south Asia It has been used in Middle Eastern folk medicine as a natural remedy for various diseases for over 2000 years. Due to its amazing power of healing, Black Cumin has got the place among the top ranked evidence based herbal medicines. Listed below are some of the popular health benefits of using black cumin seeds:

Methicillin-resistant Staphylococcus aureus or MRSA is a type of often-fatal infection which is hard to treat. Researchers at the University of Health Sciences in Lahore in Pakistan discovered that patients suffering from MRSA responded well to black cumin seed treatment. The seeds consist of powerful anti-microbial and anti-bacterial agents which kill bacteria on contact. All without unwanted side effects.

Health experts consider that black cumin seeds have the capability to treat other strains of bacteria that are resistant to antibiotics including microbes that cause HIV, staphylococcal, malaria, tuberculosis, influenza, candida, and Gonorrhea.

As we all know that black cumin is an excellent source of iron and calcium thus extremely beneficial for lactating mothers, pregnant women and menstruating women due to their high need for iron and calcium. Additionally cumin also boosts breast milk secretion in newborn women because of its high constituent of thymol that increases mammary glands secretions. It is preferably taken together with honey.

Black Cumin seed is highly recommended among physicians of traditional medicine for treating diabetes. Seed extract help to increase insulin release in diabetic rodents. Apart from that Black Cumin oil has a significant activity in diabetic and high cholesterol patients.(7), (8)

Black Cumin seed given to rats was able to improve the recovery of heart tissue following injury (ischemia/reperfusion). Seeds are beneficial in the treatment of high cholesterol. Seed powder when given to people with high cholesterol was found to reduce the total cholesterol and triglycerides. Daily use of seed extract for about 2 months may help to lower blood pressure in patients with mild Hypertension (HT). Additionally black Cumin seed (Thymoquinone) reduced hardening of the arteries from high cholesterol.(9), (10), (11), (12), (13)

Black cumin is actually a wonderful appetite suppressant, which, means that it makes you feel full faster, so you eat less. Thus, you lose weight. It also helps to reduces blood sugar spikes, which helps curb food cravings. So including black cumin on a regular basis is one of the best methods to lose weight.(17), (18)

Nigella Sativa seeds are carminative, meaning they support in digestion. Black Cumin seeds offer some digestive benefits because of their calcium and copper content. Copper found in cumin seeds also maintains the health of digestive system. A 2-tablespoon serving of cumin seeds contains 112 milligrams of calcium and 104 micrograms of copper — 11 percent of your daily calcium and 12 percent of your daily copper needs. So include black cumin in your regular diet to solve all the digestion related problems.

Other Traditional uses and benefits of Black Cumin