Trending
You are at:Home»Oils»Health Benefits Of Krill Oil 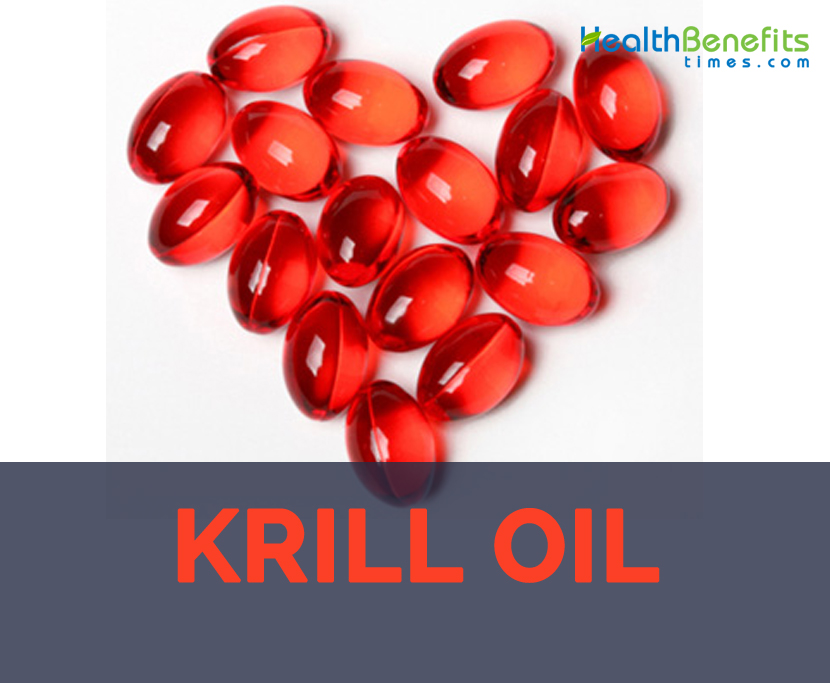 Krill oil is produced from krill (euphausia superba), a species of very small crustacean animal similar to shrimp. They can be found all over the world’s oceans and their name comes from the Norwegian word ‘krill’, meaning ‘small fry fish’. In many parts of the world, krill is a part of the human diet, while other countries have so far only used krill as a food for fish and other marine animals (in fish farms).

Producing krill oil is a bit more delicate than the production of fish oil, because of a more reduced time limit. Fish oil can be left unharvested for 24 hours before it spoils, giving pill producers extra time to handle the processing of the substance. Krill oil, on the other hand, can go bad in only an hour since harvesting the animals, so this extra hurry requires more specialized tools. Harvesting Krill for its oil requires specialized harvesting and processing techniques because traditional fish trolling is not suitable for this purpose. The processing techniques used for extracting and packing krill oil are very complicated and expensive. Therefore, Krill oil is much more expensive than fish oil.

Considered to be more powerful than its more famous counterpart fish oil, krill oil is breaking into the health supplement market. It is said to be the next best thing to treat health conditions including heart problems, diabetes, inflammation and skin problems among other things. Krill oil is a source of animal-based omega-3 fats. It comes from the tiny shrimp-like creatures which are found in cold oceans. Krill make up the largest biomass among animals on our planet at 500 million tons. Every year, only 110,000 tons of krill are harvested and their oil extracted.

Krill oil was first approved in 1999 by the United States Food and Drug Administration (FDA) for use as a nutraceutical dietary supplement.  In the past five years, krill oil exploded in popularity as a highly bioavailable source of the Omega-3 fatty acids docosahexaenoic acid (DHA) and eicosapentaenoic acid (EPA) with the added benefit of the powerful antioxidant astaxanthin.

Krill oil is found in tiny crustaceans, similar to shrimp, and is the main food source for whales in the Antarctic Ocean. It is found to be a more sustainable source of omega-3s because it’s extracted at the bottom of the food chain and is located in one of the cleanest oceans due to its low occurrence of commercial fishing. Krill oil is used as a health supplement for heart disease, high levels of certain blood fats (triglycerides), high cholesterol, high blood pressure, stroke, cancer, osteoarthritis, depression, premenstrual syndrome (PMS), and painful menstrual periods. Listed below are some of the popular health benefits of Krill Oil

One of the best-known properties of omega-3 fatty acids is their effect on heart health. Omega-3 fatty acids, which are found in high concentrations within krill, are able to balance out the cholesterol in your body, meaning that there will be less buildup in your arteries, avoiding hardening and atherosclerosis. This can considerably lower your blood pressure and reduce your risk of heart attacks and strokes.(1)

Around 25% of the UK population is obese, which contributes to numerous possibly life-limiting inflammatory diseases including CVD, type 2 diabetes and certain cancers. Krill oil is a superior form of omega 3 EFA for weight loss as research show that blood levels of endocannabinoid 2-arachidonoyglycerol (2AG), a signaling molecule that effects appetite and emotional state, are considerably reduced helping weight loss. This result was not seen with fish oil supplements. Krill oil, together with diet, also improves metabolic obesity parameters like lowering blood lipids, increasing fat burning enzymes and reducing inflammation.

Research has indicated that sufficient omega-3 consumption during pregnancy through either high-seafood diets or nutritional supplements results in improved neurological development in children. Omega-3 fatty acids, particularly DHA, are critical for the fetal and early childhood development of the brain, eyes and central nervous system. Studies have also shown benefits in children with autism and ADHD.

Mental health can be fragile due to several factors. This can be due to poor nutrition or due to environmental influencing factors. According to research, high amounts of DHA in the brain may benefit those with depression since it is one key to sufficient serotonin receptors. Low serotonin can be a cause of depression.(2)

Apart from its impact on the cholesterol levels in the body, omega-3s also act as powerful anti-inflammatory agents, and are able to transform into eicosanoids and prevent the inflammatory response of the body. This makes the omega-3s excellent remedies for inflammatory conditions like arthritis and gout, as well as inflammation of the arteries and blood vessels.(3)

Krill oil considerably prevents up to 64% cell proliferation within 72h shown in vitro studies using tissue from osteosarcoma (tumors in area of bone growth). Fish oil resulted in no important changes. The inhibitory effects of krill oil were comparable to clinical doses of drugs typically used to control these tumors that come with many unwanted side effects.

A significant amount of research has studied the impact of omega-3 acids (EPA and DHA) on neurotransmission in the brain. The studies have shown positive effects on mood and anxiety, and these acids can even be taken as antidepressants. This makes a healthy dose of krill oil, particularly when you are recovering from an illness or an emotionally tumultuous time, even better for your overall health!(4)

8. Reduce the Risk for Skin Cancer

Makers of krill supplements promote krill oil’s ability to improve skin texture, reduce wrinkles, ease the itchy red plaques of psoriasis, strengthen nails, and make hair appear thicker. No reliable studies back these claims, but there may be one benefit. Krill eat algae, and a study in the Journal of Agricultural and Food Chemistry reported that astaxanthin found in algae protected rats from skin cancer.

Since omega-3 is good for the brain, it has been found that a daily supplement of omega-3 from krill oil can prevent dementia and other age-related deterioration. Research using data from the Framingham Heart study found older people who have high DHA levels in the blood have a 47% lowered risk of developing dementia.

Since omega-3 from krill oil also has an anti-inflammatory capacity, it is helpful in fighting physical aging as well as mental aging.(5)

Antioxidants present in krill oil have been found to be effective in fighting the effects of free radicals in the body. This can lead to improved skin texture and a reduction in wrinkles, stronger nails and healthier, thicker hair. Numerous ORAC (Oxygen Radical Absorbance Capacity) tests have proven that krill oil effectively repairs aging cells when compared to other antioxidants. In fact, independent labs confirmed that krill oil contains an ORAC value of 430 while fish oil has an ORAC value of 8. This means krill oil has over 48 times more antioxidant power than fish oil.

Krill oil help to boost energy! Krill oil switches on genes involved in the mitochondrial electron transport chain, a crucial pathway responsible for producing cellular energy (ATP).This exciting research recommends that krill oil could be important in preventing a decline in cellular energy production, a common symptom of which are reduced in illness, stress and ageing. This increased energy production effect has not been reported with fish oils.

When it comes to the proper development of your fetus and your small, newborn infants, krill oil can help ensure that the nervous system, brain and eyes receive the nutrients they need. Different chemicals and compounds are required for different levels of development, so pregnant women should ensure they have enough omega-3s for a healthy child. Krill oil is a great source for this.(6)

Although not commonly known as a digestive agent, krill oil does have an effect on the gastrointestinal system, namely due to its anti-inflammatory properties. This can remove stomach upset, indigestion, hemorrhoids and constipation, resulting in better overall health of your entire system.(7)

Diabetes can’t be totally wiped out of the body; however, it can be managed. Krill oil has the capacity to reduce high glucose levels. This is essential in managing diabetes. As stated, krill oil helps to fight inflammation, cardiovascular diseases and brain and joint problems which are a few of the complications people with diabetes have to face.

One of the important properties of krill oil is its ability to boost the immune system. Krill possesses an antioxidant called astaxanthin, which can considerably improve the strength of your body’s defenses, and can seek out free radicals and neutralize them. This can lower your chances of developing chronic disease and avoid other infections throughout the body.(8)

For women who suffer extreme physical and mental symptoms when going through their menstrual period, krill oil can help to balance out the hormones and reduce anxiety. Omega-3s can reduce issues like cramping, heavy flows, and unpredictable menstrual cycles. Krill oil is a great way to benefit from omega-3 fatty acids and antioxidants to lessen those unpleasant symptoms.(9)

Krill oil supplements offer another great health benefit due to its ability to support joint health. Getting more omega-6 than omega-3 may lead to mild imbalances that set the stage for joint health problems. Krill oil is a highly digestible form of Omega-3, which helps maintain a good omega-3 and omega-6 balance, so important for joint function.

Omega-3 is known to be a good component for improving eye health. Astaxanthin, the antioxidant that krill oil contains, is present in large quantities in the eyes and is known to be good protection against UV damage. Krill oil is often recommended by optometrists to remedy dry eyes.

Research has shown that antioxidants are able to stimulate neural activity by clearing out plaque and ensuring blood flow to the capillaries around the brain. If you are beginning to feel a bit forgetful in your old age, it is never a bad idea to give your brain a bit of a boost with omega-3 fatty acids found in krill oil. It is also known to improve retention of information and concentration skills.(10)

One of the important organs affected by krill oil and its constituent chemicals is the liver. Given that the liver is the detoxification center of the body, hepatoprotective effects are important. A regular supplement of krill oil can ensure that your liver continues functioning normally, and keeps your blood clean!(11)

Unlike certain types of fish where fish oil is derived, krill species are not known to possess dangerous minerals, such as mercury. Since krill only feed on the lowest level of the food chain, phytoplankton, they do not intake any of these minerals. Krill oil in incredibly pure, which is yet another reason why people are beginning to switch to this completely natural and beneficial option.(12)

The appropriate dose of krill oil depends on several factors such as the user’s age, health, and several other conditions.

Typical capsules come in 500mg and 1000mg sizes and strengths.

There is not enough scientific info to determine an appropriate range of doses for krill oil.

Natural products are not always necessarily safe and dosages can be important.

Be sure to follow relevant directions on product labels and consult your pharmacist or physician or other healthcare professional before using krill oil – or any supplement.

Krill oil is derived from a tiny crustacean that resides in the icy waters around Antarctica. Just like fish oil, krill is naturally rich in omega 3 fatty acids including EPA (eicosapentaenoic acid) and DHA (docosahexaenoic acid), which are important for health. In contrast to fish oil, the omega 3 fatty acids from krill come attached to phospholipids. Krill oil is a very safe supplement, but it should be avoided by people with seafood allergies, since it can trigger a reaction.