Trending
You are at:Home»Vegetables»Top 10 benefits of Mache (Corn salad) 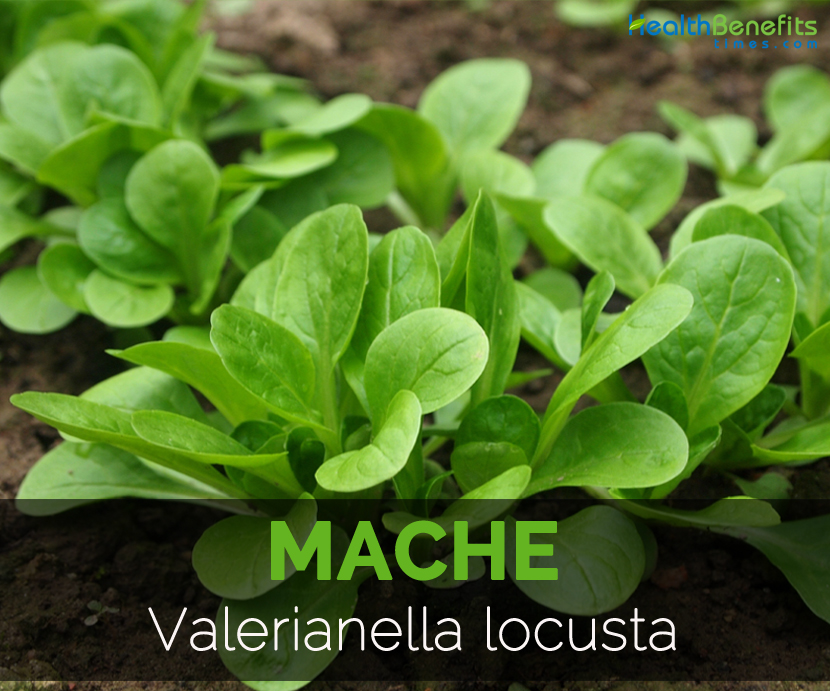 Mache is an annual plant of the family Valerianaceae. It is mostly grown as leaf vegetable. Other common English names are Corn salad, European corn salad, Fetticus, Lamb’s lettuce, Feldsalat, Common corn salad, Field salad, Nut lettuce, Italian corn salad and Field lettuce. Mache is a small, annual and rosette shaped bunches which grows in a mild and dry or moist soil. The plant grows upto 15 and 30 cm high. It has spoon shaped-round leaves which are 6 inches long. The leaves are dark green which have distinct, sweet and nuttiness taste. The flowers have five bluish-white petals of funnel shaped which is 1.5-2 mm (0.06-0.08 inches) long and wide. Fruits are yellow, round and flattened achene.

Mache is native to temperate zones of Europe. Mache was foraged by the European peasants till royal gardener of King Louis XIV, Jean Baptiste de La Quintinie, introduced it in the world. In Britain, it was consumed for centuries. It was commercially cultivated from late 18th or early 19th century in London and appeared on modern markets in 1980s. The president of America, Thomas Jefferson cultivated Mache at home Monticello in Virginia in early 1800s.

Traditionally, it was cultivated in France to use in salads. Mache is wildly grown in parts of Northern Africa, Europe and Western Asia. In Asia and Europe, it is cultivated as common weed in land as well as waste spaces. In North America, it has become naturalized on the western and eastern seaboards. It is a major crop of Nantes and France, which is the leading producer of Mache in the Europe.

This plant was cultivated earlier in the monasteries gardens. Till 19th century, it was cultivated as winter lettuce. Today, Mache grows wild in the pastures and meadows and is mainly cultivated in France, Germany, Italy and European countries.

Mache is a salad green which helps to reduce triglycerides, inflammation, heart ailments, digestive ailments, cancer and improves HDL. It contains 30% more iron in comparison to spinach. It helps to eradicate stress, depression and fatigue. It is steamed and added to salads or consumed as vegetables.

Vitamin A helps to prevent macular degeneration which is one of the main causes of age related blindness. Vitamin A eye drops helps to treat dry eyes effectively. It provides relief from dry eyes. Vitamin A slows down the development of Stargardt’s disease which is an eye disease for causing vision loss. (1)

Vitamin A enhances the immunity functions against infections by raising lymphocytic responses against antigens. It promotes the functions of white blood cells. It prevents the entering the germs to the body and counteract infections by providing double core protection. (2)

The hypertension patients have the high chances of cardiovascular diseases. The intake of Vitamin C helps to lowers the blood pressure in the body. (3)

The study shows that high intake of Vitamin C helps to lower the appearance of wrinkles, skin dryness and slows down the process of aging. Vitamin C helps in the formation of tendons, skin, blood vessels and ligaments. It helps to heal the wound and forms scar tissue.

The evidence shows that Vitamin C cream can reduce the skin redness. It helps to maintain skin health as it is rich in antioxidants which help to prevent the body from skin cancer. (4)

The deficiency of iron increases the chances of premature birth and underweight newborn. Premature born babies experiences the health ailments such as cognitive development and delayed growth. The intake of iron supplements helps to lower the chances of low birth weight newborn by 10.2 percent. (5)

This mineral helps in the formation of hemoglobin. Iron provides dark red shade to the blood and assist in circulating oxygen up to the body cells. Additional hemoglobin is very important as blood is lost during internal and external injuries. Especially women lose blood during the menstruation due to which they could suffer from anemia. (6) (7)

Vitamin B6 has the ability to metabolize nutrients to extract the energy. This vitamin helps in the metabolism of vitamins, fats, carbohydrates and amino acids. (8)

Vitamin B6 helps in brain function and brain development. The studies haves shown that deficiency of Vitamin B6 enhances the function of memory and contributes to the Alzheimer’s, dementia and cognitive impairment. The studies have shown that deficiency of Vitamin B6 leads to the Alzheimer’s disease. Vitamin B6 impacts the function of brain by controlling the level of homocysteine which is the major cause for heart disease and damage of neurons.

Vitamin B6 has vital role in the formation of the hormones such as norepinephrine and serotonin which is called happy hormones that controls energy, mood as well as concentration. The researchers show that behavior disorders such as ADHD is caused due to the low level of serotonin. Vitamin B6 has positive effect on the children having behavior and learning disorders. (9)

The supplement of Manganese provides relief from the osteoporosis. This mineral adds density to the bones. It helps in the formation and repairment of bones but the studies are still going on. Further studies are still needed for the specific mechanisms and roles of manganese in the human body. (10)

Manganese is essential for the formation of digestive enzymes which is responsible for the process known as gluconeogenesis. Gluconeogenesis converts the amino acids of proteins to sugar and balance the sugar in the blood stream. Manganese helps to prevent the level of high blood sugar which leads to diabetes. The study shows that manganese promotes the secretion of insulin, mitochondrial function and reduces lipid peroxidation. (11)