Trending
You are at:Home»Fruits»Health benefits of Malay Apple

Malay apple scientifically known as Syzygium malaccense is an evergreen tree belonging to Myrtle family Myrtaceae. The plant is native to Southeast Asia to Vanuatu, but its exact origin is uncertain, probably in the lowland rainforests of Peninsular Malaysia, Java and Sumatra. It is now cultivated and naturalized in many countries throughout the tropics, particularly in Indo-Malaysia, Southeast Asia, East Africa, Central and South America, Melanesia, Polynesia and Micronesia. It is one of the species cultivated since prehistoric times by the Austronesian peoples. They were carried and introduced deliberately to Remote Oceania as canoe plants. In modern times, it has been introduced throughout the tropics, including many Caribbean countries and territories. 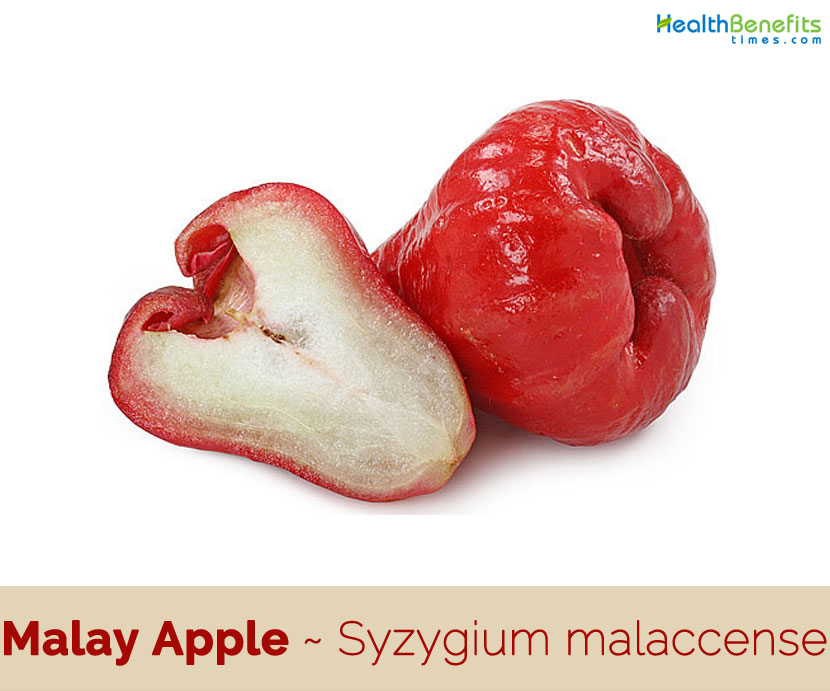 Kavika Tree, Large Fruited Rose Apple, Malay Apple, Mountain Apple, Malacca Apple, Malay Apple, Malay Rose Apple, Mountain Apple, Otaheite Cashew, Otaheite Apple, Pomerac, Malaysian apple, Pink satin-ash, Rose-apple, Water apple, long fruited rose-apple, wax jambu and Malacca pear are few of the popular common names of the plant. Syzygium malaccense has a number of English common names. It is known as a Malay rose apple, or simply Malay apple, mountain apple, rose apple and pommerac (derived from pomme Malac, meaning “Malayan apple” in French). Despite the fact that it is occasionally called the otaheite cashew, it is not related to cashew. While cashew nuts (but not cashew fruits) may trigger allergic reactions, rose apple fruit has not been observed to do so.

Malay Apple is a medium-size evergreen tree with a spreading but cone-shaped crown that grows about 5 – 20 meters tall, though specimens to 30 meters have been recorded from New Guinea. The straight, cylindrical bole can be 20 – 45 cm in diameter (to 130 cm in New Guinea), often branching from near the ground though sometimes free of branches for 10 – 15 meters, with buttresses at the base. Bark is pale-brown, rough, flaky or fissured. The plant is adaptable to a wide range of soil type from sand to heavy clays but prefers well drained, medium textured soils like loams, sandy clay loams, sandy clays, clay loams. It grows well in volcanic soils but is intolerant of alkaline or saline soils.

Leaf blades are slightly curved upward on both sides of midrib; the lateral veins are slightly sunken and connected near margins.  The upper surface of the leaf is dark green or green and usually slightly shiny, and the lower surface dull light green. Scattered minute gland dots are visible with a lens when the blade is held toward the light.

Several to many odorless flowers are borne in clusters 4-5 inches across; almost stalk less on a short branched green lateral axis (cyme or panicle). Flower has a funnel-shaped, light purplish- green base (hypanthium) ¾ inch long and 7/16 inch wide at top, enclosing the ovary and extending as a broad tube 3/16 inch beyond. There are 4 broad, rounded, thickened, persistent sepals 1/8-3/16 inch long; 4 spreading, rounded, concave, purplish-red petals ½ inch long; the mass of stamens 1-11/4 inches long, purplish red with yellow dot antheis; and pistil composed of inferior 2-celled ovary and persistent purplish-red straight style about 1¼ inches long. As the stamens fall, the ground under the tree becomes a purplish-red carpet.

Fertile flowers are followed by a large, fleshy, ovoid, pear-shaped, dumb-bell shaped or oblong berry 4–7.5 cm long, glossy, waxy, crowned by the incurved non-fleshy calyx segments. Color of the fruit varies from white, greenish white, dark pink, red, purple- red or white with red streaks. Flesh is 0.5-2.5 cm thick, juicy, white and fragrant. Normally Malay apple is red with pink or white streaks; the flesh is thick, rather dry and scented, but often bland. Eighty percent or more of the fruit is edible. Each fruit usually contains a single large, brown, sub globose seed that is 2.5-3.5 cm in diameter. Malay apple ripen about 60 days after bloom.

The flesh makes a jam prepared by stewing with brown sugar and ginger. Trunk of the Mountain Apple tree was used by the people of old Hawai’i to build beams for their hale, house and for fashioning bowls and poi-boards. A reddish brown dye for making patterns on tapa bark cloth, was processed from the bark and the root. 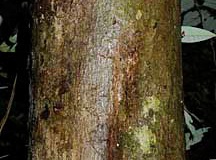 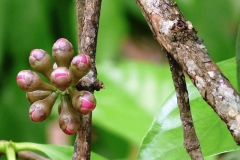 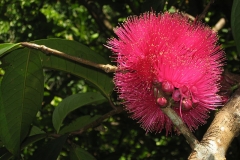 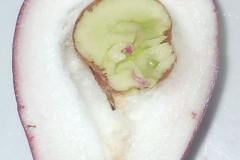 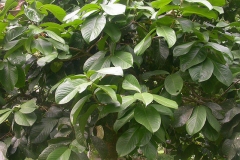 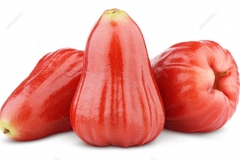 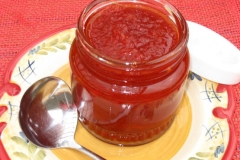 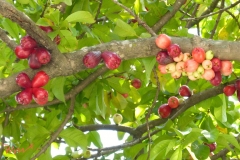 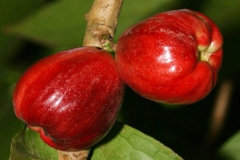 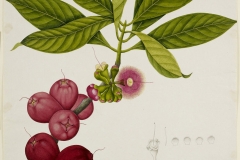 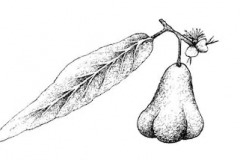 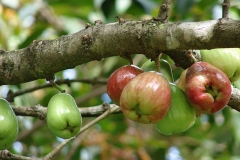 In case you have problems with the eyes, maybe your body need vitamin A. Vitamin A on Malay apple fruit is high enough and helps to make your eyes health much better. With a healthy eye, your eyesight can be more clear and sharp.

Malay apple can also be used as medicine to relieve fever. You can make the steeping of this fruit with warm water and give it to people with fever. Fever will gradually heal and fall.

The benefit of cashew boll for the skin is quite a lot. In addition to nourish your skin, this fruit can also help to make your skin smooth and rubbery. The content of vitamin C and other minerals will prevent you from diseases, such as skin cancer.

Malay apple fruit helps to prevent diabetes. This fruit serves as a substitute for regular sugar that you often consume. The content of sugar in the fruit tends to be low but still can meet the needs sugar of your body. Therefore your blood sugar levels can be more controlled easily.

Maybe sometimes you feel your endurance is going down. No need to worry about it. Malay apple consists of 22 milligrams of vitamin C per 100 grams, this going to make your immune system stronger and fill the need of vitamin C in your body. Vitamins presents in Malay apple helps to get rid of various diseases that will attack your body health.

If you are often get sprue, maybe your body lack vitamin C. Because one of factor you get sprue is you lack of vitamin C. 100 gram of malay apple consists of 22 milligrams of vitamin C, this gonna better for you to treat your sprue. This fruit has some vitamin content that can treat sprue and protect your oral cavity from infection.

Malay apple fruit has the property to overcome dysentery. This disease is a contagious disease; it needs to be addressed as soon as possible so as not to spread rapidly.

The iron in this fruit, help your bones become stronger. Including this fruits is quite beneficial and you do not have to worry about osteoporosis or another bone related problems.

An adequate amount of Vitamin A and C could be obtained from the Rose Apple which helps to prevent damage from the oxidative stress caused by the poor diet, stress, and pollution. It also reduces the dryness of the skin and reduces the wrinkles.

Acne vulgaris is a skin condition which leads to the inflammation caused due to skin infection. The research shows that the leaves of Rose Apple possess anti-acne properties such as anti-inflammatory, antioxidant and antibacterial properties. The experiment also shows that the presence of synergic actions results from the antioxidant, antibacterial and anti-inflammatory activities. Thus, S. Jambos assist in anti-acne activities. This study helps to know about the herbal medicines whereas various clinical trials are being continued.

Liver damage leads to various liver diseases which are caused due to the excessive consumption of alcohol, anemia, malnutrition, infection and hepatotoxic drugs. The research which was carried out at Gujarat Ayurved University shows that the leaves extract of Rose Apple consists of the liver protective agent. It leads to the effectiveness in the change in the function of the liver than the disease control group. The efficacy was worthy of comparison to the standard drug.

Dietary fiber in Rose Apple supports the digestive system in the material movement and stimulate stool which is helpful for those having the irregular stools or constipation. It supports healthy weight and reduces the chances of heart disease and diabetes.

Here is the list of other benefits of Malay apple:

If your baby’s appetite is weak, maybe you can try this. Boil some water with young bark of Malay and put it in the glass. And then add some sugar to gives some taste and drink it to the baby. It can increase baby’s appetite.

If your tongue is wound, you can try this to treat it. Pick up the dry leaves of Malay apple and make it become powder. And apply it on the wound tongue.

By using the root of Malay apple, itching can be treated. So don’t worry. But not only itching can treated by the root, but also swelling, relieving dysentery, shed the menstruation and diuretics.

To cooling down the fever, not only by drinking the boiled water from fruits of Malay apple, but also from the leaves and it seeds too.

To treat common disease, you can treat it by processing the part of Malay apple such as fruit, leaves, or others.

Seeds bark, and leave of Malay apple show antibiotic activity and have an effect on blood pressure and breathing.

To treat oral infection in Samoa, some people use the leaves of Malay apple with the way make it to juice.

Other Benefits for Pregnant Women

Here is the list of health benefits of Malay apple for pregnant women:

Physical control methods such as cutting down or frilling (removal of bark completely around the base of the tree trunk) have been used in combination with herbicide applications in vigorous efforts to control some Syzygium species that have proved invasive threats to native flora in places such as Hawaii, the Galapagos Islands, and Pitcairn Islands. Physical removal of trees and replacing them with native species has also been a reported method for an invasive Syzygium species (S. jambos) in Costa Rica (Avalos et al., 2006).

Syzygium species can be controlled by herbicides, and in places where species have become serious threats to native flora, a combination of physical and chemical control methods have been reported. Syzygium cumini, for example, forms a dense cover and because of its extensive cultivation as a fruit tree, has become very invasive in Hawaii, the Cook Islands, and French Polynesia; vigorous efforts are being undertaken in Hawaii to remove the species through chemical control. Syzygium jambos is likewise an invasive species on several Pacific islands, and has been reportedly controlled by applying herbicides.