Food sources and facts of Vitamin B12 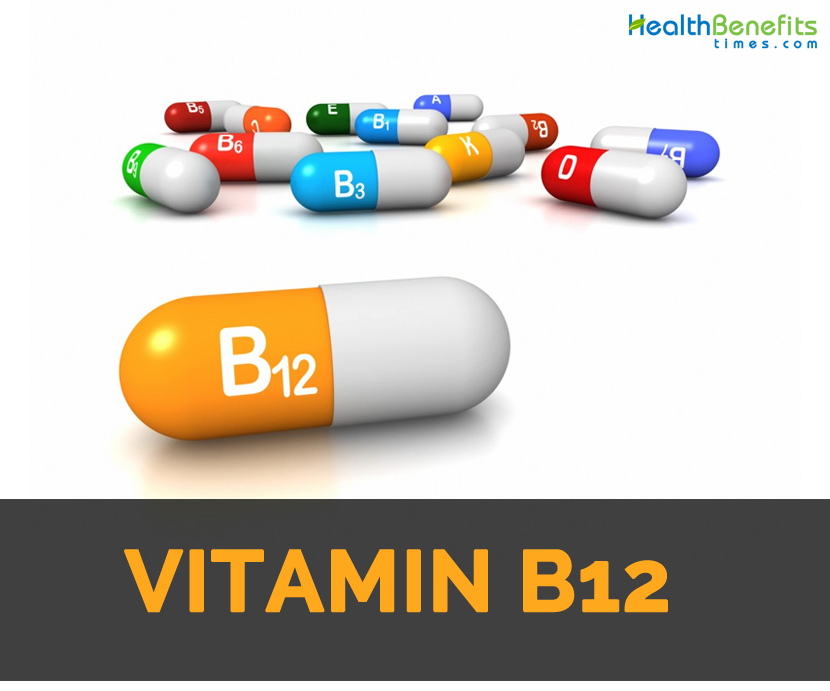 Vitamin B12, also called cobalamin, is an essential factor in the production of red blood cells. People with insufficient amounts of Vitamin B12 in their systems suffer from anemia. Cobalamin is essential for other blood cells production and neurologic function. Someone with severe B12 deficiency may have anemia as well as a variety of neurologic and psychiatric problems. These symptoms can be as mild as irritability, a slight memory loss, and the sensation of pins and needles in the extremities. They can be severe, including, among other things, shaky, unsteady gait, weakness, incontinence, peripheral neuropathy, dementia, and psychosis.

One disease associated with low levels of B12 was known even before the specific vitamin was discovered. It was called pernicious anemia. Doctors knew that something collected in animal livers cured the disease, so people with pernicious anemia were effectively treated with large amounts of liver. Eventually the vitamin was isolated and its chemical composition understood.

Research has led to much greater knowledge of B12 and its role in health as well as disease. Vitamin D is necessary for normal DNA synthesis. It works along with folic acid in a wide variety of ways. Normal amounts of both B12 and folic acid are necessary to prevent a substance called homocysteine from accumulating in the body. Elevated homocysteine levels are implicated in many common medical problems, including cardiovascular disease, neurologic disorders, and cancer. It is somewhat difficult to look at Vitamin B12 in isolation from folic acid.

How Much Vitamin B12 Do We Need?

What Foods Provide Vitamin B12?

Are There Special Factors Involved in the Absorption of Vitamin B12?

Health Benefits of Vitamin B12

Below are some health benefits of Vitamin B12:

Since the level of B12 affects the level of homocysteine, and high homocysteine levels are associated with higher risk of cardiovascular disease, including coronary heart disease and stroke, it has been suggested that B12 supplementation might lower the risk of these conditions, in patients with elevated homocysteine.

Since B12 is necessary for DNA synthesis, low levels of the vitamin might hinder cell repair and lead to higher incidence of cancer. Perhaps supplemental B12 can reduce the risk of cancer. Lower rates of colon cancer and cervical cancer may be related to higher B12 levels.

Vitamin B12 boost metabolism as it is required for converting carbohydrates into glucose in the body. Glucose derived from carbohydrate foods is used as form of energy. So people with its deficiency experiences fatigue. Vitamin B12 is required for neurotransmitter signals which assist muscles contract and provides energy for a day without being tired and run down. The deficiency of this vitamin causes chronic fatigue, sluggishness, appetite and mood changes and won’t be helpful to lose weight with these symptoms. Increase in intake of Vitamin B12 assist one to lose weight and enhance energy levels with regulation of appetite.

Vitamin B12 deficiency is a contributor of various neurologic and psychiatric disturbances. Vitamin B12 is beneficial for cognitive function with vital role in nerve health or neurotransmitter signaling helping to lower the chances of neurodegenerative diseases such as dementia and Alzheimer’s disease. The conducted study shows the efficacy of Vitamin B12 for treating these cognitive ailments. Researchers found the link between low levels of Vitamin B12 with vascular dementia, Alzheimer’s disease and Parkinson’s disease. Its supplements assist in correcting biochemical deficiency and promote cognition in patients having existing deficiency of Vitamin B12.

Vitamin B12 is beneficial for regulating healthy nervous system and lowering mood disorders such as anxiety and depression. With folate, Vitamin B12 is required as a major determinant of one carbon metabolism that produce compound known as SAM (S-adenosyl methionine) which is imperative for neurological function combating with mood regulation and stress. This vitamin is required for cognitive processes and concentration including learning. Since its deficiency causes problem in focusing and increasing chances of attention.

Vitamin B12 is a must for healthy hair, skin and nails as it has a major role in cell reproduction. It is beneficial for skin health by lowering dryness, redness, acne, blemishes and inflammation. It is also applied to the skin for eczema and psoriasis. It lowers breakage of hair and nails. It prevents heart diseases such as stroke and heart attack by reducing high homocysteine levels in blood. Evidence shows that Vitamin B12 controls high cholesterol or high blood pressure levels. It also prevents atherosclerotic diseases which is a harmful buildup of plaque in arteries.

Vitamin B12 has a vital role in helping with production of digestive enzymes, support healthy metabolism and breakdown of fats within stomach. It fosters healthy bacteria in gut environment. Eliminating harmful bacteria in digestive tract and presence of beneficial bacteria prevents digestive problems such as inflammatory bowel disease and candida.

Vitamin B12 assists in production of Red blood cells that carries oxygen through blood. Low count of red blood cells refers development of anemia characterized by chronic fatigue and to become exhausted by doing slightest activity.

There are a number of other conditions that may be related to low B12 levels. They are also often associated with low folic acid levels and elevated homocysteine levels. Folic acid is known to be necessary to prevent defects in the neural tube of the developing embryo. In some people, vitamin B12 may also be necessary. High levels of homocysteine may be related to early pregnancy loss and preeclampsia. This may be secondary to insufficient B12.  Macular degeneration, a deterioration of the retina that can lead to blindness, is associated with high levels of homocysteine. It is possible that B12 might help treat this condition. There are many other conditions that may be related to elevated homocysteine levels and/or low B12 levels.

How Much Vitamin B12 Is Lost from the Body Daily?

Once vitamin B12 is in the body it stays there for a while. Literally, very little amounts of vitamin are lost from the body regularly excluding abnormalities. On the contrary to water soluble vitamins, the loss of Vitamin B12 from the body is not though urine but in feces. Liver combines little Vitamin B12 with bile and carries to digestive tract. Vitamin B12 in small portion is not reabsorbed and becomes feces.

What Happens If Too Little Vitamin B12 Is Consumed?

Contrary to other water-soluble vitamins, vitamin B12 losses from the body are small and occur primarily through the feces. Vitamin B12 in small amounts enters digestive tract regularly as part of bile released during meals. Most Vitamin B12 is reabsorbed from the digestive tract whereas some are lost through feces. It has been estimated that we lose only about 0.1 percent of vitamin B12 stores daily through this process. Therefore, provided that there is optimal vitamin B12 re-absorption from the digestive tract, people having good stores of Vitamin B12 could consume diet with insufficient Vitamin B12 for years before it shows signs of deficiency—at least in theory. Deficiency of vitamin B12 will result in a form of anemia in which red blood cells appear large and immature (macrocytic megaloblastic anemia). About 150 years ago, English physicians recognized that people with this type of anemia often died. They called this illness pernicious anemia, as pernicious means “leading to death.” This anemia is usually related to the involvement of vitamin B12 in folate metabolism and DNA production. People with deficiency of Vitamin B12 experience destruction of nerve myelin leading to nerve impulse conduction disturbances, paralysis and eventually death.

What Happens With Too Much Intake of Vitamin B12?

B12 is very safe to use and well tolerated by most people. There are no established adverse effects from taking too much B12. There have been reports of itching and rash following ingestion of B12, and also reports of diarrhea. B12 and pyridoxine together have been associated with rosacea fulminans, which may need to be treated with steroids. Vascular thrombosis has been reported. B12 replacement can make other hidden illnesses apparent, including polycythemia vera. B12 should not be taken by patients who are going to have coronary artery stents placed or who have Leber’s disease—hereditary optic nerve atrophy.

What Situations Can Result in Vitamin B12 Deficiency?

There are a couple of situations that can lead to a deficiency of vitamin B12.

Intake of plant derived foods only without supplementation of Vitamin B12 leads to deficiency. Individuals who became a vegetarian later in life may not show signs of a vitamin B12 deficiency for a long time but for children the onset of deficiency will be shorter. In either case the time to deficiency depends on the level of body B12 stores prior to conversion.

Factors that affect vitamin B12 digestion and absorption are prone to Vitamin B12 deficiency than insufficient intake from dietary sources. Diseases and surgical manipulation of the stomach (removal and stapling) can affect its ability to make and release adequate intrinsic factor and R proteins. It could result reduction in Vitamin B12 absorption. These Vitamins Are Vital Molecules in Food proteins are must for absorption of Vitamin B12 in food and also for reabsorbing vitamin B12 entering the small intestine as part of bile.

Older people are at high chances of suffering from Vitamin B12 deficiency as the stomach loses its ability to make sufficient acid with age. Stomach acid helps liberate the vitamin B12 in food so that it can interact with R proteins and intrinsic factor. Besides anemia, Vitamin B12 deficiency shows signs such as back pain, weakness, apathy and tingling in extremities. These signs are shown before never damage occurs.