Trending
You are at:Home»Foods»Health benefits of Poi 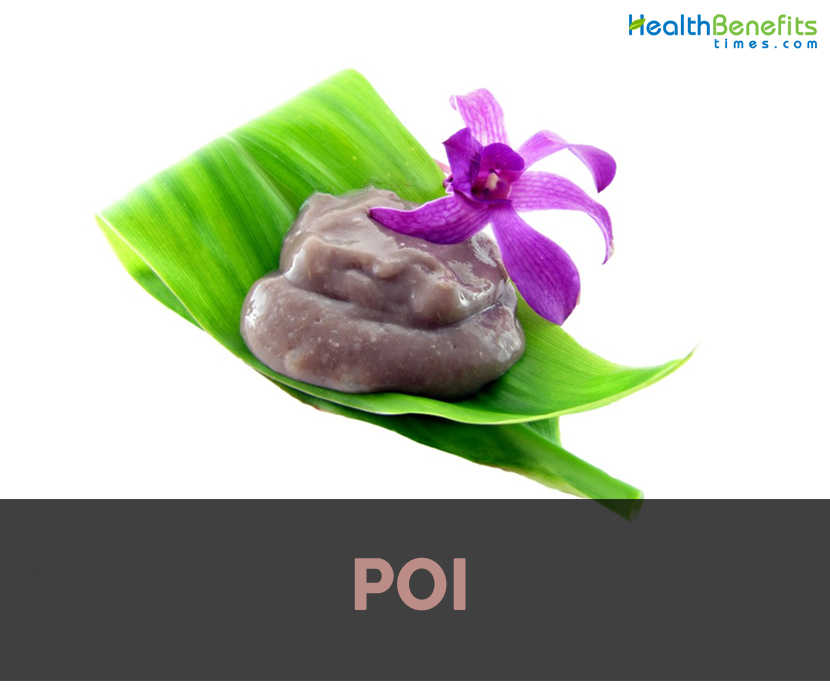 Generally, poi is the traditional staple food in native cuisine of Hawaii which is made from underground plant stem and corm of taro plant. Traditional poi is made by mashing cooked corm on wooden pounding board, papa ku‘i ‘ai with a carved basalt pestle. These days, industrial food processor is used to produce extensive quantities for retail distribution. Crushed taro without adding water is highly starchy and resembles dough. Add the water during mashing and before eating to get desired consistency which ranges from highly viscous to liquid.

Poi is also called one finger, two finger or three finger that depends on the consistency of poi implying how many fingers are required to scoop it in order to consume it. Poi has a mild and slightly sweet taste which pairs well with fresh island fish and often used as a dipping sauce.

Poi could be consumed fresh or left longer to ferment. Poi prepared from taro should not be confused with samoan poi, a creamy dessert formed by mashing ripe bananas with coconut cream and Tahitian po’e, a sweet pudding like dish which is made with papaya, bananas and mangoes cooked with coconut cream and manioc.

In Samoa and other Pacific islands, poi is a thick paste of crushed pineapples or bananas combined with coconut cream. The term stands for the action of crushed food to a pulp. People who cannot tolerate many foods could go for poi as the better option. In Hawaii, babies are fed poi as the first solid food. Poi is a starch with low fat, protein and contains several vitamins such as phosphorous, Vitamin B and calcium. Poi is hypoallergenic, gluten free and encloses heat and acid tolerant.

Though many people in the world consume taro but only Hawaiians prepare poi. Traditionally, Hawaiians cook starchy taro root for hours in underground oven known as imu, also used to cook other types of food such as carrots, pork and sweet potatoes.

Recently, the shortage in production of taro led to increase in price for poi in Hawaii. Innovations in production of poi results in making poi fresh longer and also taste sweeter. Withal, such products sell at premium price and require refrigeration.