Trending
You are at:Home»Herbs and Spices»Know about Rose of Sharon 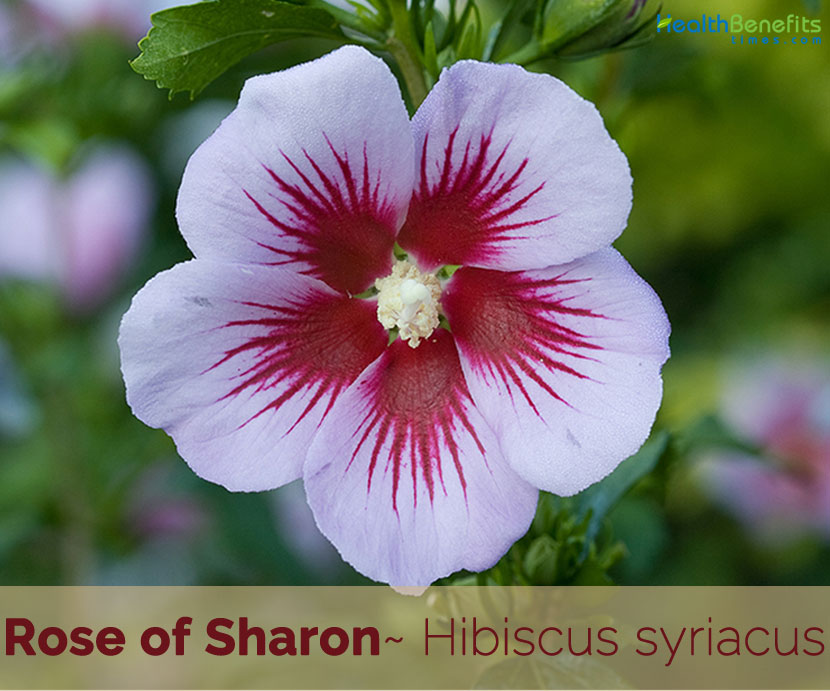 Hibiscus syriacus commonly called rose of Sharon or shrub althea is a species of flowering plant in the mallow family, Malvaceae. The plant is native to south-central and southeast China, but widely introduced elsewhere, including much of Asia. The name of the genus comes from the Latin hibiscum, name utilized by Pliny (23-79) for indicating the Althaea officinalis, in its turn descending from the Greek ibiskos, referred to some Malvaceae. Specific epithet suggests the plant comes from Syria which appears to be false because it is native to eastern Asia. Common names include Rose mallow, Rose of Sharon, Shrub althaea, Shrubby althaea, Syrian hibiscus, Syrian rose, Syrian ketmia, Althea, Blue Hibiscus, Common Hibiscus, Hardy Hibiscus, Korean rose and St Joseph’s rod. It is the national flower of South Korea and is mentioned in the South Korean national anthem.

Rose of Sharon isn’t a rose, but its large, flat blossoms and nectar attract hummingbirds and tiny insects. Native to China and India, they have been cultivated as long as records exist.  Chinese used the flowers and leaves for food. Thomas Jefferson grew them from seed, and was recognized to have planted them at all three of his homes. Flowers on this woody shrub come in several colors, including white, pink, purple, and red. Its leaves don’t come out until late in spring.

Rose of Sharon is an upright and vase-shaped, hardy deciduous shrub that normally grows about 8 to 15 feet tall and spreads 4 to 10 feet. The plant is found growing in sea cliffs, hillsides, along streams, roadsides, around old home sites, along fence rows, along railroad tracks, and in urban woodlands.  The plant thrives on is a moist, but well-drained, mixture of sand, clay, chalk, and loam, maintaining an alkaline, neutral pH (5.5 – 7.0) level. Stem is woody, erect and have thin light gray bark, branchlets densely pubescent with stellate hairs, becoming glabrous ultimately. Branches are thin and gray, white-lenticeled, with raised leaf scars and small buds. Young twigs have a line of curved hairs running the length of the internodes. 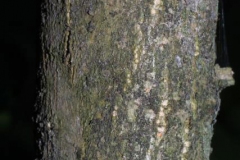 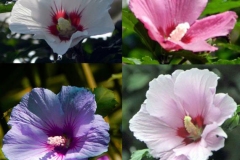 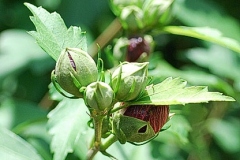 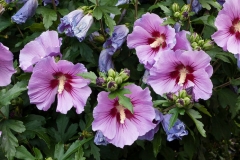 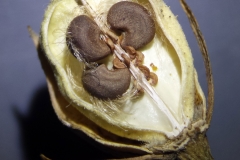 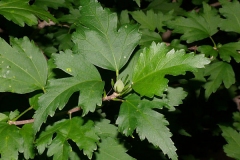 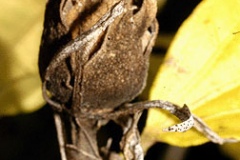 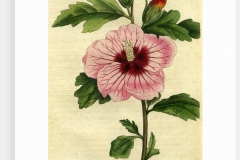 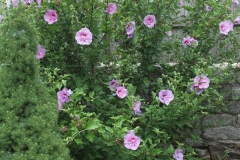 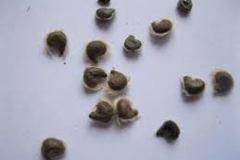 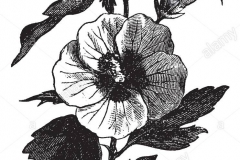 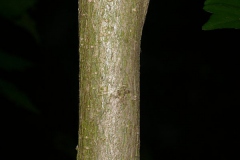 Flowers are solitary or in small clusters in the axils of the leaves. Each flower has 7-8 linear stellate pubescent bracts. The calyx is bell-shaped and united for about ½ of its length. Each flower has 5 obovate petals that vary in color from white, red, purple, mauve, violet, or blue, or bicolor with a different colored throat, depending upon the cultivar. In many forms the base of the petals are red, forming an eye in the center of the flower. The numerous stamens are united to the style. The plant can bloom continuously from July through September, usually at night. Individual flowers are short-lived, lasting only a day. The 4 in (10 cm) wide, single- or double-flowering, large-petaled, very showy flowers adorn the plant throughout the summer. With maturity, flexible plant stems become weighted under the load of prolific summer flowers, and bend over halfway to the ground.

Most modern cultivars are virtually fruitless. The fruits of those that have them are green or brown and are ornamentally unattractive. The fruits are ovoid, pubescent, yellowish, 1.5-2 cm long, capsules, of 1.2 cm of diameter, containing several seeds. They will eventually break over the course of the dormant season and spread their easily germinating seeds around the base of the parent plant, forming colonies with time. These reniform seeds are 2-4 mm long, having a row of long, yellowish-white hairs along the dorsal line. It easily reproduces by seed or by semi-woody cutting at the beginning of summer, if we want to be sure to reproduce a particular variety

Hibiscus syriacus has been grown as a garden shrub in Korea since ancient time.  Its leaves were brewed into an herbal tea and its flowers eaten. Later on it was introduced and grown in the gardens of Europe as early as the 16th century, though as late as 1629 John Parkinson thought it was tender and took great precautions with it, thinking it “would not suffer to be uncovered in the Winter time, or yet abroad in the Garden, but kept in a large pot or tubbe in the house or in a warme cellar, if you would have them to thrive.” By the end of the 17th century, some knew it to be hardy: Gibson, describing Lord Arlington’s London house noted six large earthen pots coddling the “tree hollyhock”, as he called it, “that grows well enough in the ground”. By the 18th century the shrub was common in English gardens and in the North American colonies, known as Althea frutex and “Syrian ketmia”.

Traditional uses and benefits of Rose of Sharon

Diseases on Rose of Sharon plant