Trending
You are at:Home»Herbs and Spices»Health benefits of Russian Sage 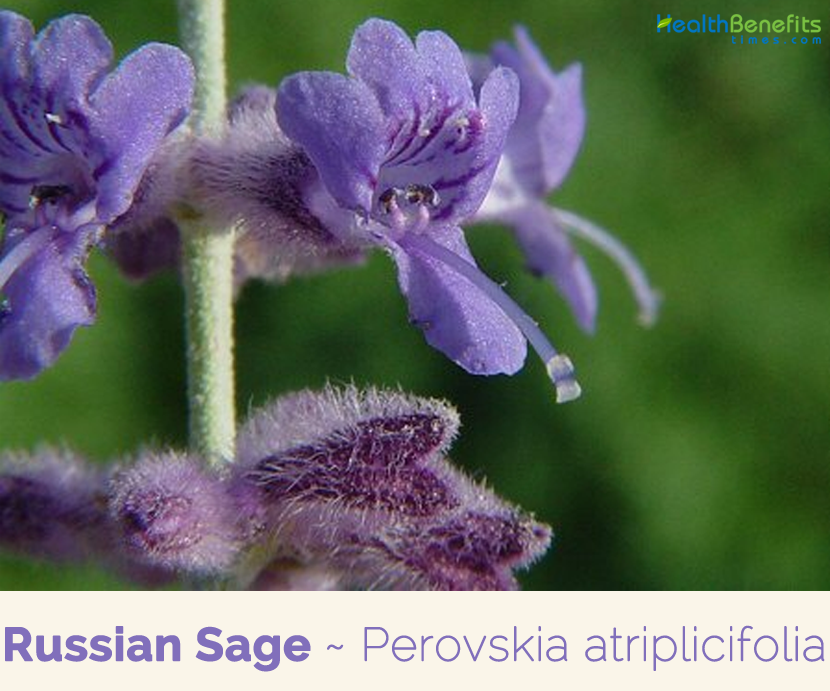 Russian sage scientifically known as Perovskia atriplicifolia is a deciduous woody shrub in the mint family (Lamiaceae). The plant is native to central Asian countries such as Afghanistan, Pakistan, and Tibet and grown as a landscaping plant in U.S. Department of Agriculture plant hardiness zones. Although the aromatic shrub is called “sage,” it is not a culinary herb. In fact, the plant contains a chemical that can be toxic in large doses. Apart from Russian Sage it is also known as Russian sage and Afghan-sage.  Genus name honors Russian general V. A. Perovski (1794 – c. 1857). Specific epithet means with leaves resembling salt-bush.

The intense fragrance of Russian sage is similar to some of the true sages. It was a relatively unknown landscaping plant until the 1990s, despite being mentioned by well-known landscape authors such as Gertrude Jekyll and Russell Page. Its fragrant flowers attract bees and butterflies. It is used in herbal medicine to soothe the stomach, treat fevers and help relieve cold or flu symptoms. Talk with your doctor before using Russian sage for medicinal reasons.

Russian sage is a deciduous, semi hardy, flowering herbaceous perennial plant and subshrub with an erect to spreading habit that grows about 0.5–1.2 m (1 ft. 8 in–3 ft. 11 in) tall, with occasional specimens reaching 1.5 m (4 ft. 11 in). The mature plant may be 0.6–1.2 m (2 ft. 0 in–3 ft. 11 in) across. The plant tolerates a variety of soil conditions. Young specimens perform best when planted in a mixture of peat and either sand or perlite.  P. atriplicifolia can thrive in sandy, chalky, or loamy soil, or heavy clay soil with sufficient drainage.  It can endure a wide range of soil pH, as well as exposure to salty conditions near oceans. Rigid stems are square in cross-section, and are covered by an indumentum formed by stellate, or star-shaped, trichomes and oil droplets. Especially during autumn, these hairs give the stems a silvery appearance.

Plant has grayish-green leaves that are arranged in opposite pairs, and attached to the stems by a short petiole. They are generally 3–5 cm (1.2–2.0-inch) long and 0.8–2 cm (0.3–0.8-inch) wide, although narrower in some populations. The overall leaf shape is oblate; a rounded shape longer than it is wide, to lanceolate, shaped like the head of a lance. They are pinnatipartite, with a deeply incised leaf margin that may be either wavy or sharp-toothed; even within a single community of P. atriplicifolia, there can be considerable variation in the details of leaf shape. Leaves near the top of branches may merge into bracts. The foliage is aromatic, especially when crushed, with a fragrance described as sage-like, a blend of sage and lavender, or like turpentine.

The inflorescence is a showy panicle, 30–38 cm long (12–15 in), with many branches. Each of these branches is a raceme, with the individual flowers arranged in pairs called verticillasters. Each flower’s calyx is purple, densely covered in white or purple hairs, and about 4 mm long (0.16-inch). The corolla is tube-shaped, formed from a four-lobed upper lip and a slightly shorter lower lip. The blue or violet blue petals are about 1 cm long. The style has been reported in both an exerted—extending beyond the flower’s tube—form and one contained within the flower. Flowering normally takes place from September to October. Fruits develop about a month after flowering, and consist of dark brown oval nutlets, about 2 mm × 1 mm (2⁄25 by 1⁄25 inch).

Russian Sage has long been valued for soothing upset tummies, reducing fever and helping alleviate symptoms of cold and flu. Listed below are few of the common health benefits of consuming Russian Sage

Russian Sage steeped for 15 to 30 minutes in a covered cup of hot water makes a medicinal tea that can be used to help relieve stomach upset and indigestion. Russian sage is said to arrest diarrhea and soothe the stomach. You can drink the tea cold or hot.

Russian sage is used to help reduce fevers. The steeped tea is left to cool. A cloth is soaked in the tea and used as a compress on the forehead to help reduce the fever. Aromatic scent of the sage also helps by having a soothing effect.

Russian sage is aromatic; it helps open blocked airways and has a calming effect. This is one of the reasons it is used to help relieve cold and flu symptoms. It has expectorated properties that ease bronchial afflictions. Pot of boiled water filled with Russian sage leaves can be used similar to a steam pot. Place a towel over your head and lean over the pot Russian sage infused water. Sage steam will help clear blocked nasal passageways.

As with any hot tea, Russian sage tea when drunk warm, helps the body to perspire. Calming tea can help sooth nausea associated with colds and flues.