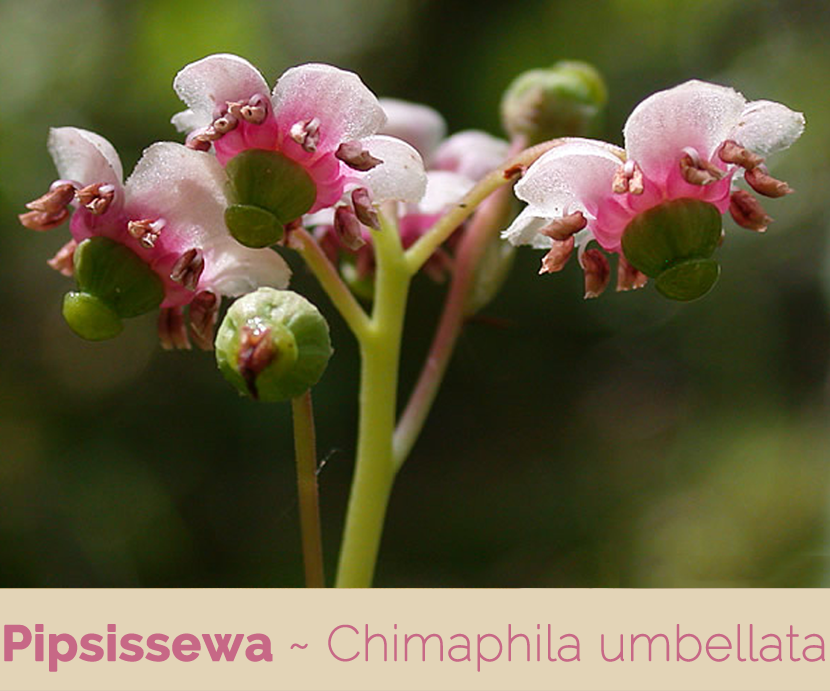 The herb derives its name from the Cree (one native tribe Canada) term “pipsisikweu ‘which translated into English literally means’ it breaks into small pieces.” This name of the plant is mainly due to the belief that the plant pipsissewa contains a substance that helps dissolve kidney stones and gallstones. The aerial part or only the leaves are gathered when the plant is in flower and dried for later use in herbal teas and liquid extracts. The leaves of C. umbellata are known to be the most medicinally useful, but all parts of the plant have been used in the past in some remedial way.

Pipsissewa is a small perennial herbaceous, everlasting, flowering plant that grows about 10-25 cm (4–10 inches) tall. The plant is found growing in dry woodlands or moist areas in coniferous woods or along mountain streams. The plant prefers light moist but well-drained lime-free soil. The plant has creeping and woody rootstock. Erect stems are slender and woody, each year’s growth putting out 3 to 4 new branches which root down over time to slowly form colonial mats.

The leaves are evergreen, opposite or whorled in groups of 3 to 8, oblong to lance shaped or elliptical with the lower leaves smaller and nearly oval, 1¼ to 2 inches long, 1/3 to ¾ inch wide, the upper surface very shiny with distinct sharp teeth along edges, on a short stalk.

3 to 7 nodding flowers occur in slender stalks at the end of a stem that stands well above the upper leaves. Flowers are ½ to ¾ inch across, 5 white petals pink at the base, spreading like an umbrella around a plump green central pistil, along with a halo of 10 prominent orbiting anthers. Flowering normally takes place from July to August. Flowers are followed by upright, dry, 5 sectioned capsules about ¼ inch in diameter, reddish brown with distinct button-like cap from the enlarged stigma. The capsule dries to a dark brown and persists through winter.

There are four subspecies:

Leaves of the plant are used medicinally. The leaves of this plant are collected when the plant is in full bloom and then dried for healing purposes. It is used either in the form of tea or tincture (liquid extract). The fresh leaves can also be used for external purposes in the form of the poultice. Listed below are few of the health benefits of consuming Pipsissewa

Poultice made from pipsissewa has been used to deal with painful conditions of the joints or bones. Conditions like rheumatism, arthritis and gout can all be treated efficiently by applying the herb directly to the affected area of the body. The herb also has mild pain killing properties when applied directly to the skin. To treat joint pain and inflammation, you can rub the leaves directly into your skin or make a poultice with the leaves. The leaves should not be taken internally.

Pipsissewa herb is supposed to have derived its name from the Cree Indian word “Pipsisikweu,” Which means “to break into small pieces” when translated into English. This is quite relevant as the long term use of this herbal remedy has been scientifically proven to help in treating edema. Further it even dissolves kidney stones (by breaking them into small pieces).

Respiratory issues are quite widespread during the cold season. This should not bother anymore. Because the unusually named yet bitter herb can be taken internally to address common respiratory problems. Drinking this potent natural herbal remedy helps to treat the common respiratory ailments. These include chest congestion, bronchitis, colds, sinus infections, and whooping cough.

4. To relax the mind

Drinking pipsissewa tea may help relax your mind and calm down during periods of moderate stress. Though there is no scientific evidence of its effects on stress, many teas have a calming effect on people and according to anecdotal evidence; pipsissewa may help relax the mind effectively.

Oxidation is a harmful process that occurs in the human body. This process damages cell membranes among other important structures that maintain optimum body health. Thus, can result in the production of potentially harmful molecules.

These molecules cause various chronic diseases, damage body tissues and even cause aging. This can, yet be easily prevented by drinking Pipsissewa herbal tea which contains potent antioxidant compounds that work effectively to combat and even neutralize these free radicals.

Fever, which is also known as, elevated temperature, Pyrexia or Hyperthermia is another medical condition that you can manage or even alleviated using this herbal remedy.

According to recent scientific findings, Pipsissewa herb consists of unique diuretic properties that are quite useful in promoting sweating. This alone plays a major role in breaking a fever. Pipsissewa is quite effective in managing fever. It is even used to treat most common fever diseases including typhoid.

Pipsissewa herb consists of various anti-inflammatory compounds. These works together to help alleviate the common health issues which is caused primarily by inflammation. This is the reason why the potent herbal remedy is often topically applied. This helps to alleviate joint and muscle pain that is associated with rheumatism.

This herb can also be topically applied to alleviate skin sores, swelling, and even blisters. There are also some scientific findings that indicate that the herb can also manage and even treat both arthritis and gout.

Traditional uses and benefits of Pipsissewa

It can be used in various forms such as in a form of tea, as a homeopathic medicine, in the form of culinary, as well as herbal medicine.

Pipsissewa tea has a bitter but pleasant taste. It comes with many benefits. In a cup, put a teaspoon of the pipsissewa herbs. Put boiling water in the cup. Let the herb soak in the boiling water for a couple of minutes, then strain the water. Drink it. You can also add milk or honey for enhancing the taste.

It is also used in the homeopathic form for treating severe inflammation of the prostate and mammary glands as well as urinary tracts.

Pipsissewa is generally found in capsule form. But, when consumed internally in the herb form, it helps in treating edema, kidney related problems, regulating menstruation. It also helps in treating various skin conditions from the external application.

It is also used in giving flavor to beer and candy. Now, for dosages.  If using in:

Use 1 teaspoon of the herb. Soak it in a cup of boiling water, then strain the leaves.

Use a couple of drops.

How to make Pipsissewa tea

To make a medicinal tea with pipsissewa, simply follow these very easy steps.