Trending
You are at:Home»Herbs and Spices»Facts and benefits of Yarrow 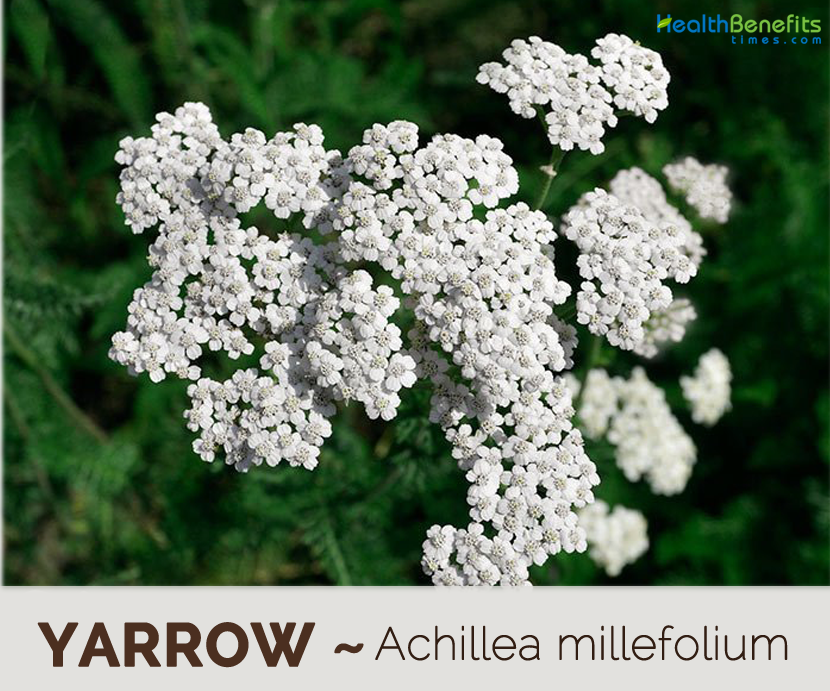 Achillea millefolium, or yarrow is an aromatic perennial plant of the aster or Asteraceae (Compositae) family and is closely related to chrysanthemums and chamomile. The herb originates from the northern hemisphere (Europe, Asia and North America), but it can be found all over the world today.  The yarrow plant carries several other common names like common yarrow, milenrama, milfoil, western yarrow, bloodwort, carpenter’s weed, plumajillo, Boreal yarrow, California yarrow, Giant yarrow, Coast yarrow, Pacific yarrow, devil’s nettle, gordaldo, nosebleed plant, old man’s pepper, old man’s mustard,  sanguinary, soldier’s woundwort, thousand-leaf and thousand-seal, knight’s milfoil, noble yarrow, staunchgrass, soldier’s woundwort, devil’s plaything, bad man’s plaything, yarroway, herb militaris, field hop, millefolium, ladies’mantle, gandana, i-chi-kao and gearwe, yerw. The word “Achillea” refers to Achilles, an ancient hero. He said that he used yarrow for himself and for his soldiers. “Millefolium” means “coming of a thousand leaves”. This refers to the very small, fine and feathery leaves of this plant. Plant is named after Greek’s hero Achilles, who used yarrow to treat battle wounds of his soldiers. Yarrow is also known as carpenter’s weed because carpenters often use it to stop the bleeding from the wounds and cuts that are unavoidable part of their work.

Yarrow is mainly cultivated because of its healing properties and as an ornamental plant. Other than that, yarrow is beneficial in gardening and it can be used to prevent erosion. The herb has been introduced as a feed for livestock in places like New Zealand and Australia. The whole plant is more or less hairy, with white, silky appressed hairs. This herb plant was first used by ancient Greeks over 3,000 years ago for treating external wounds on the skin. Flowers and leaves of yarrow were eaten and also made into a tea-like drink. The fresh leaves were chewed on to relieve tooth aches. Scientists have recognized yarrow for its benefits relating to almost every organ in the body.

Yarrow is an erect herbaceous aromatic, perennial plant that grows about 11 to 40 inches (30-100 cm) in height. The plant is found growing in mesic to dry prairies, pastures, fallow fields, grassy waste areas, edges of railway tracks, lawns, grassy areas, old fields, along fence lines, roadsides and edges of paths, yards, or hedges. Disturbed areas are also preferred. It does well in a nutrient poor soil as long as it is well-drained. Also grows well in sandy or salty soils, and damp woodlands with clay soils. The herb consists of one to several stems that are normally angular and rough.

Leaves are evenly distributed along the stem, with the leaves near the middle and bottom of the stem being the largest. The leaves have varying degrees of hairiness (pubescence). The leaves are 5–20 cm long, bipinnate or tripinnate, almost feathery, and arranged spirally on the stems. The leaves are cauline, and more or less clasping. Leaves are covered with tiny hairs.

Inflorescence has 4 to 9 phyllaries and contains ray and disk flowers which are white to pink. The generally 3 to 8 ray flowers are ovate to round. Disk flowers range from 15 to 40. The inflorescence is produced in a flat-topped cluster. Flowers are about a quarter-inch in diameter, with four to six, but generally five ray flowers with three teeth at their tip. The ray flowers are usually wider than they are long and surround many little disk-like flowers. Flowering normally takes place from Jun to August. The herb consists of nut-like fruit called achene which contains one seed. The flowers and leaves of yarrow were eaten and also made into a tea-like drink. The fresh leaves were used to stop bleeding wounds, treat gastrointestinal problems, fight fevers, lessen menstrual bleeding and better circulation. The fresh leaves were also chewed on to relieve tooth aches. Scientists have credited yarrow for its benefits relating to almost every organ in the body.

Yarrow is perennial herb native to the roadsides and meadows of Europe and America. It is considered by its white or lavender clusters of flowers and highly segmented leaves. Flower has been used for centuries to treat a wide variety of health conditions ranging from toothache to menstrual cramps. Listed below are few of the health benefits of using yarrow

Several scientific research has evaluated achillea millefolium‘s hypotensive, vasodilatory and bronchodilatory activities. In other words, the herb has the ability to lower high blood pressure, relax blood vessels and improve breathing. Yarrow’s effects on the study’s animal subjects backed up the medicinal use in hyperactive cardiovascular and airway disorders like high blood pressure and asthma.(1)

Yarrow is quite helpful in alleviating the symptoms of mastitis. Mastitis is actually a breast infection that mostly occurs among women who are breast-feeding. When you have mastitis, it’s a smart idea to alternate between warm and cold compresses since cold helps relieve pain while warmth increases circulation.

Yarrow has the ability to ease the circulation system actually also works the same way in the respiration system. That means, yarrow can also be used to relieve the symptoms of asthma. That is because yarrow has this special ability called “bronchodilatory” which basically means that it can help relaxing the bronchi and easing the inflammation along the airways. Using yarrow can help relieving from asthma because the inflammation and tension in the airways are few main causes of asthma symptoms.

The antispasmodic activity of yarrow makes it useful for unwanted gastrointestinal concerns like diarrhea, flatulence and cramping. Animal research has shown that it can reduce smooth muscle spasms that contribute to GI complaints.  When taken internally, the antispasmodic ability is most likely due to the plant’s flavonoid fractions.(3)

5. Relieve the Symptoms of Inflammation

Some of the problems suffered by our internal organs are caused by inflammations. Take for example, sore throat, stomachache, and some respiratory conditions. Since a long time ago, yarrow has been used in many countries as a traditional medicine to treat those inflammation symptoms. That is because the extracts of yarrow are said to contain many anti-inflammatory properties.

Besides stopping bleeding, yarrow can also be used to urge bleeding in certain situations. There’s this condition called amenorrhea, when menstruation is absent because of abnormal causes. Combined with herbs such as rue, motherwort, and partridge berry, yarrow is categorized as emenagogue. Emmenagogue can be described as some herbs whose ability is stimulating blood flow in the pelvic area, including the uterus, which in turn encourage blood flow in menstruation period. However, albeit being practiced for centuries already, there is no research present to back up the claim on this benefit.

Consuming yarrow as a tea can do wonder to your body. It is even known to be the second greatest benefit of yarrow, the first being its wound-healing ability. It is believed that drinking tea made of yarrow can induce more perspiration. That is because yarrow can help dilating the pores and blood vessels under the skin, which in turn can help our bodies getting rid of some toxins along with the sweat. As we all know, the most common and also proven traditional way to cure cold is to break some sweat, thus, drinking yarrow tea can help relieving and even curing the common cold.

It is an ingredient prized by the cosmetic industry as it has excellent scar removal properties. It not only speeds up the healing process, but also reduces the appearance of scars. There are many ways yarrow can be used to heal scars, either by oral consumption or by using it in your skincare routines. Its anti-inflammatory properties also calm the irritation and redness surrounding the wounds.

Besides being used on wounds and also being drunk as internal medicine, yarrow can also be used as ointment for skins, mainly to treat some skin problems. For example, eczema, which is a form of skin inflammation. Using yarrow as an ointment can pacify the inflamed skin and for the case of opened wounds, can also quicken the recovery of the tissues by killing off the bacteria or other microbes that might cause infections.

Traditional Uses and benefits of Yarrow

Flowers, leaves and stems can be used to make a medicinal tea. You can use either the fresh or dried herb. Yarrow tea can taste bitter so you can use honey to take the edge off if needed. Many tea recipes include lemon, which gives a nice boost of vitamin C.

Caution should be exercised when using yarrow if the person has an allergy to ragweed. Avoid use if there are gallstones present. An allergic skin rash or skin sensitivity to light may be caused by extended use of yarrow whether it is being used medicinally or in the diet. If you have allergies, be sure to check with your healthcare provider before taking yarrow.

Pregnancy and breast-feeding: Yarrow is likely unsafe when taken by mouth during pregnancy as it can affect the menstrual cycle and might cause miscarriage.

Yarrow use may also alter estrogen activity. Women who experience heavy periods or who have pelvic inflammatory disease should not use yarrow. Even though yarrow is used to treat wounds, it still should not be used to treat large, deep, or infected wounds. The actual leaves of the yarrow plant should never be used alone internally.

Surgery: Yarrow might slow blood clotting so there is a concern that it might increase bleeding during and after surgery. Stop taking yarrow at least 2 weeks before a scheduled surgery.