Trending
You are at:Home»Foods»Health benefits and nutrition of rye bread 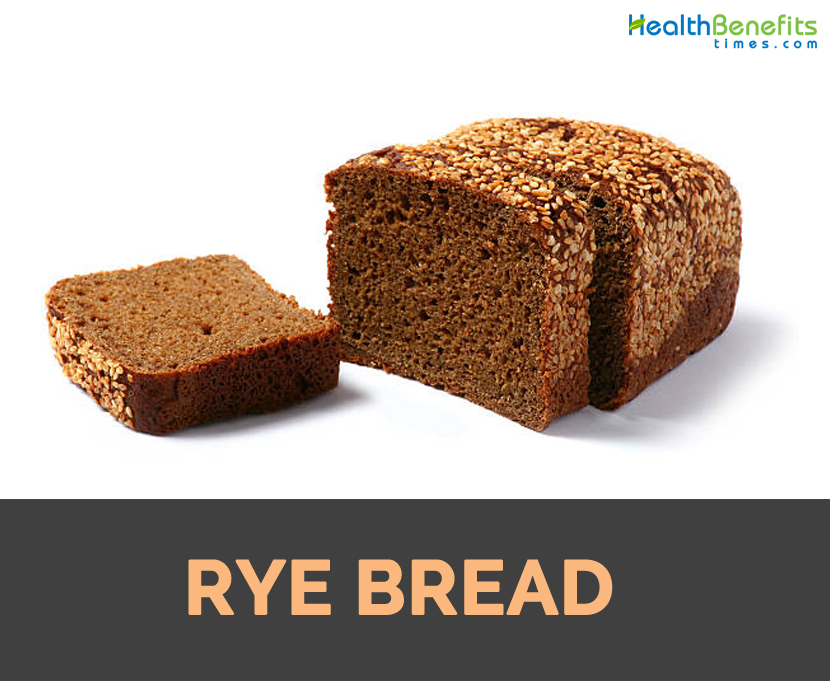 Rye bread is a bread type prepared with assorted proportions of flour obtained from rye grain. It is light or dark in color that depends on the flour type and also use of coloring agents. Customarily it is denser than bread prepared with wheat flour. It has high content of fiber when compared with white bread and is often dark in color and possess stronger flavor.

Around 500 AD, the Saxons and Danes settled in Britain and introduced rye, which was well suited to its temperate climates. Rye is a predominant cereal crops and this grass type is cultivated extensively throughout the world. Scientifically, it is known as Secale cereal. It resembles barley and wheat agriculturally so it has similar applications. In these present days, majority of rye is cultivated in Eastern Europe into Central and Northern Russia but also found in China, North America and South America. It belongs to the top five most consumed cereals in the planet.

Rye bread is beloved by health conscious people and switching to rye from wheat bread provides wide range of benefits:

Foods rich in fiber assist digestion and cholesterol. Rye bread has high content of fiber and twice than wheat based breads. Additional fiber found in rye bread supports digestion and makes feel full for longer time period after meal. The composition and density of dietary fiber in rye is effective for treating the people with constipation or blockage of bowel. It could lower excess gas, cramping and ease stomach pain and also prevents serious health conditions such as gallstones, ulcers and colon cancer.

Adding rye bread to the diet makes one feel less hungry and also controls appetite by keeping one satisfied for hours. The study shows that people with same caloric intake from breakfast with addition to rye porridge as a substitute to wheat or other grain experienced satisfied feeling for eight hours without intake of more food.

People with gluten cut down should add rye bread as a perfect substitute to bagel. It has low level of gluten than white breads. It is effective for people having slight sensitivity.

Rye is an excellent source of magnesium and iron. It offers more than wheat and also offers zinc as a bonus. The body deficient in these vital nutrients affects both mood and energy levels. Rye bread has twice more potassium than white bread which is crucial to regulate blood pressure. A slice of bread contains more than just carbohydrates. It contains magnesium, calcium, zinc, manganese, iron and pantothenic acid.

Recent study has shown that the children diet has a crucial role in the development of asthma. Rye bread is known to be effective to counteract health conditions such as asthma. It showed that children with rye on diet have low chances of developing childhood asthma.

Foods rich in fiber assist in preventing gallstones. Rye is perfect for maintaining a healthy body. The fiber content on rye is four times more than rye bread. People who are prone to gallstones should add rye bread to the diet which assists in preventing this health problem. It has certain elements that help to lower the bile acids which are the cause for gallstones.

Rye bread helps to boost metabolic rate. Fiber found in it has certain properties that assist body to use all the extra energy that could be converted to fat. This also assists in shedding extra weight.

Rye has low glycemic index referring fiber in it forms less amount of glucose. It helps to avoid insulin spines in diabetic people. It balances the level of blood sugar avoiding chronic ailments. Rye helps to maintain digestive health. Fiber found in it is known as prebiotic which provides relief from constipation. It comforts stomach cramps and pains. It also favors in treating ulcers.

Rye bread helps to prevent heart problems as well. Fiber reduces the level of cholesterol. It has been discovered that genes could be controlled with right diet. People with any heart related conditions should add rye bread to the diet.

Research shows that inflammation is the major cause for many diseases. Adding nutritional elements such as rye in the diet could lower inflammation in the body. Add rye to the diet to maintain overall health. Inflammation promotes the chances of type 2 diabetes.

Rye has ample amounts of calcium and magnesium. Bones are the storehouse of calcium. It stores 99 percent of the calcium in the body and releases it to bloodstream when required. The good content of calcium, manganese and magnesium helps in formation of stronger bones and teeth.

Rye is known as heart friendly grain. People experiencing high blood pressure should add it to a regular diet. The number of variables such as vitamin, fiber and mineral content has positive effects in the body.

Side effects of rye bread