Trending
You are at:Home»Herbs and Spices»Health benefits of Salad Burnet 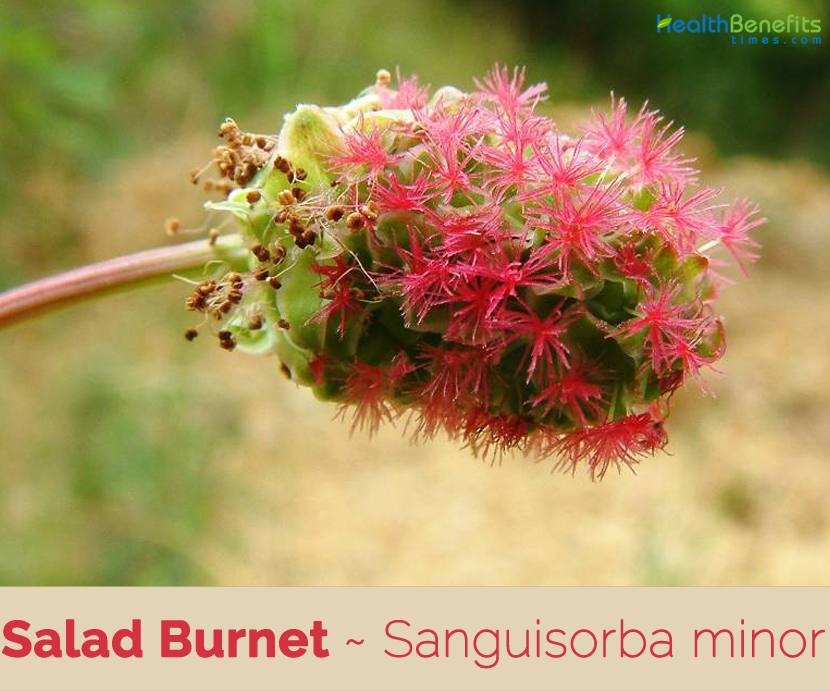 Sanguisorba minor commonly known as salad burnet, is a perennial herb of the Rosaceae (Rose family). The plant is native to Europe, western Asia and Siberia, and northern Africa. In North America it is found occasionally in the western U.S. and to a lesser extent in the eastern U.S. from Tennessee and North Carolina to New England and the Great Lakes region. It is mostly grown in the herb gardens for its tasty leaves. Few of the popular common names of the plant are garden burnet, official burnet, burnet bloodwort, common burnet, salad burnet, sanguisorba, little burnet, small burnet and greater burnet. Genus name comes from the Latin words sanguis meaning blood and sorbeo meaning to soak up for its use to stop bleeding. Specific epithet means smaller.

It is used as an ingredient in both salads and dressings, having a flavor described as “light cucumber” and is considered interchangeable with mint leaves in some recipes, depending on the intended effect. Typically, the youngest leaves are used, as they tend to become bitter as they age. Salad burnet has the same medicinal qualities as medicinal burnet (Sanguisorba officinalis). It was used as a tea to relieve diarrhea in the past. It also has a respectable history, called a favorite herb by Francis Bacon, and was brought to the New World with the first English colonists, even getting special mention by Thomas Jefferson.

The plant has 12 to 17 pinnately compound basal leaves that are 2 to 8 inches (4-20 cm) long, egg-shaped, and sharply toothed. Each leaf has 4-12 pairs of rounded, toothed leaflets (to 1 inch long). The lower leaves are cauline and pinnate with the stipules adherent to the petiole and 10-15 cm long. Leaflets are crenate-toothed, alternate and pinnately compound and progressively reduced upward. Young leaves have the best taste (reminiscent of cucumber). Leaves are used fresh off the plant in salads, soups, herbal butters, vinegars or cold drinks.

Salad burnet plant has male, bisexual and female flowers that appear in late spring and early summer. The top flowers are male, middle flowers bisexual and the female flowers grow on the top of the cluster. The flowering stems rise from the basal rosette and can grow to 1 foot in height. The inflorescence is a dense head or spike at the end of a long naked peduncle, 10-25 mm long. Each flower is subtended by a papery bract and there are approximately 12 stamens. There are no petals and the four sepals are broad, 4-5 mm long, greenish or white to red or purple. Flowering stalks are slightly interesting but not particularly ornamental and are often removed by gardeners who are more interested in harvesting the leaves for culinary use. Flowering normally takes place from May to August. Fertile flowers are followed by achenes, paired in a persistent, usually winged, 3- to 5-mm-long. Seeds are small, with about 50,000 seeds per lb. 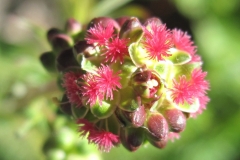 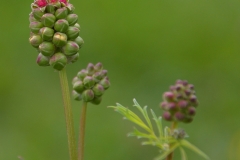 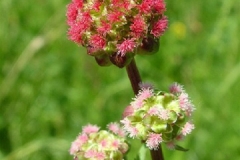 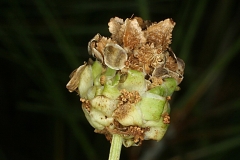 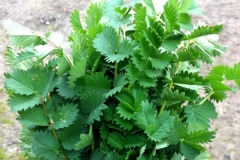 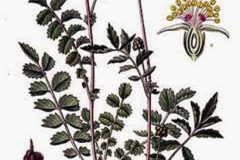 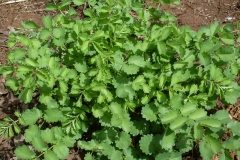 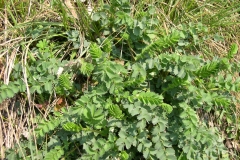 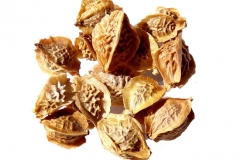 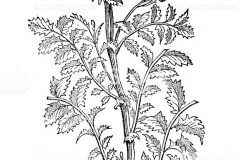 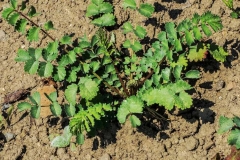 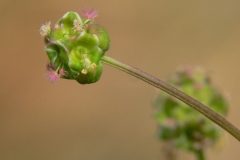 Salad Burnet has been known to boost the sex life of people and is normally utilized for the purpose of treating erectile dysfunction in men. Roots of this plant is dried and then crushed to obtain a powder which is utilized for this function.

Leaves of this herb are known to be helpful in treating issues related to gastro-intestinal tract and are utilized as a treatment for issue such as diarrhea.

Powder derived from the roots of this herb and then mixed with sesame oil has been known to be effective in treatment against burns and cuts.

Utilizing the powder of the Salad Burnet you can make a mouthwash which helps in treatment against issues such as swollen and bleeding gums.

Salad burnet leaves can be infused and used as a calming treatment for skin-related problems such as eczema, rashes and sunburn.

The term Sanguisorba minor is derived from a Latin word known as “Sanguisorba”, which means blood absorber. This suggests why this plant is a quick remedy for stopping bleeding. Interestingly, salad burnet can also be infused as herbal tea and taken to stop excessive bleeding and to prevent hemorrhage.

The herb has been known to possess anti-inflammatory qualities and therefore is an effective cure against issues such as gout and rheumatism.

Salad burnet consists of saponins, tannins, ellagitannins and glycosides (sanguisorbins), which are supposed to be helpful in reducing the cholesterol level. Another important cholesterol-reducing compound in salad burnet is the beta-sitosterol.

Salad burnet can be used for manufacturing medications that treat rheumatism.

Due to the astringent properties of garden burnet, it can be used as a remedy for plague.

Herbs and Spices S
Share. Twitter Facebook Google+ Pinterest LinkedIn Tumblr Email
Previous ArticleNutritional needs of the infant and how these are met by human and formula milks
Next Article Cornmeal facts and nutritional value