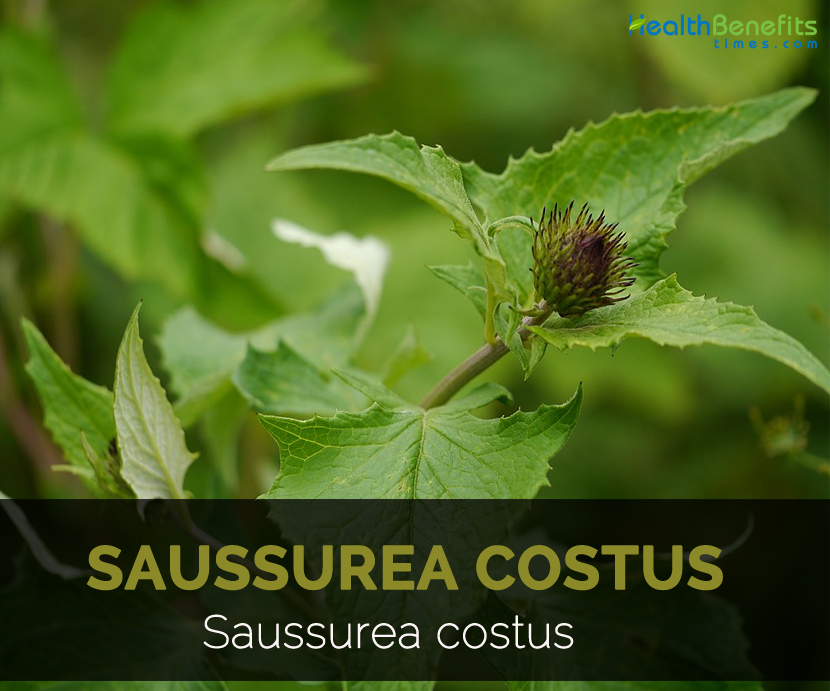 Saussurea costus is a herb belonging to family Asteraceae family which comprises almost 1000 genera and 30,000 species that is distributed more or less throughout the globe. About 177 genera and 1052 species are found in India. The genus Saussurea DC is composed of 300 species in the world and about 61 species are available in India.

It is an erect, robust herb which is generally found at the elevations of 8,200 to 9,800 ft (2,500 to 3,000 m) in India (Himalayas, Jammu, Kashmir, Kishenganga Valley and Western Ghats). Its flower heads are bluish-purple, stalkless and 2 to 5 clustered in axils of leaves or terminal. Leaves are membranous, glabrate beneath, scaberulous above and auricled at base. Typically the plant blooms from July to August and seeds ripen from August to September. The plant could be grown in wide range of soils such as light sandy, heavy to medium clay soils which are acid, neutral or basic and alkaline soils. The plant thrives from semi-shaded areas or areas with no shade.

Saussurea costus is a perennial and pubescent herb with stout simple stem usually 1 to 2 m high. Leaves are irregularly toothed; basal ones are large and about 0.50 to 1.25 m long with long winged petiole. The upper leaves are smaller, shortly petioled or subsessile. The two small lobes at base of leaves clasp the stem. The bluish-purple to black flowers are rounded, hard, about 2.4-3.9 cm across. Corolla is tubular, blue-purple or black and 2 cm long. Involucral bracts are long pointed, ovate-lanceolate, hairless, rigid and purple. Flowers are followed by fruits basically curved, compressed, tip narrowed with a rib and about 8 mm long. Pappus is double feathery and brown. Roots are dark brown or grey, stout upto 40 cm long.

Saussurea costus is effective for cancer. The study on the test of human gastric cancer cells shows that the herb suppresses the tumor growth and induces apoptosis.

Apply the juice of leaves externally on affected areas to clear eczema, itching and skin diseases.

Massage the mix of vegetable oil and Saussurea costus rhizome to the affected areas.

Take the mixture of Saussurea costus powder and honey.

Take 1 to 2 grams of Saussurea costus root powder with honey/water twice a day for 15 days.

Apply the mixture of costus root powder and vegetable oil over affected areas for blood circulation and nerve weakness.

Take 1 to 2 grams of Saussurea costus with water/honey for 15 days to expected menstruation twice a day.

Take ½ grams of Saussurea costus with honey for few days.

Take 4 to 8 pinches of Saussurea costus powder with honey twice a day after lunch and dinner.