Trending
You are at:Home»Herbs and Spices»Health benefits of Shampoo Ginger 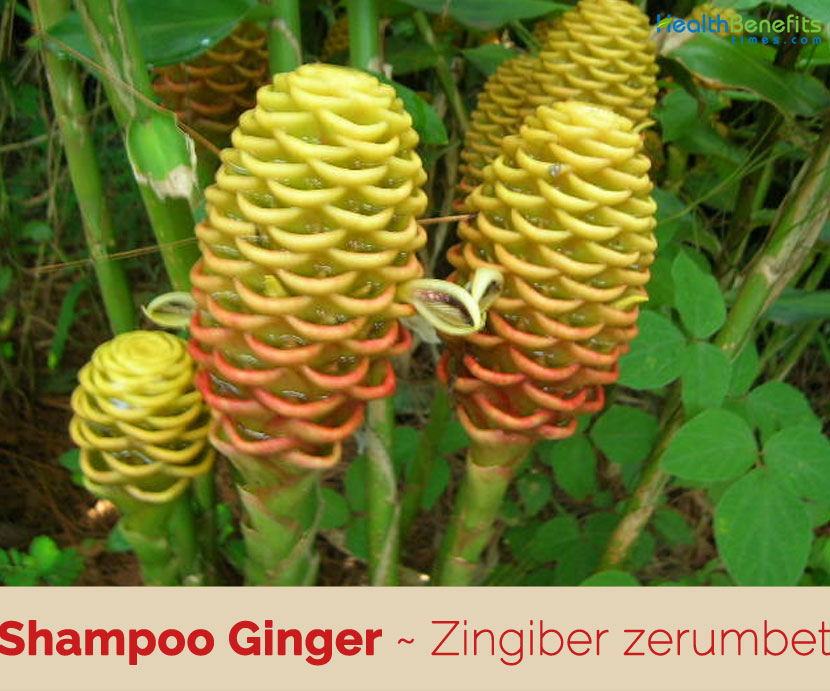 Zingiber zerumbet, commonly known as pinecone ginger, shampoo ginger or wild ginger, is a rhizomatous, clump-forming perennial of Zingiber Mill genus and Zingiberaceae family. The plant is native to tropical Indo-Malesian– India, Malaysia and Indonesia. It is widely cultivated in the Asian tropics—Cambodia, India, Laos, Indonesia, Malaysia, Myanmar, Sri Lanka, Thailand, Vietnam, Pacific Islands including China (Guangdong, Guangxi, Yunnan) and Taiwan.  It has been transported over time to many tropical areas in the Pacific Ocean with subsequent naturalization. Polynesians brought this plant to Hawaii in canoes many years ago. Although native to tropical areas, this plant goes dormant in winter and accordingly is not evergreen. It is now cultivated worldwide for its culinary and medical uses.

Broad-Leaved Ginger, Martinique Ginger, Pine Cone Ginger, Pinecone Lily, Shampoo Ginger, Wild Ginger, Zerumbet Ginger, awapumi, red pinecone ginger, zerumbet ginger and Bitter ginger are some of the popular common names of the Shampoo Ginger plant. Genus name comes from the Greek name which, in turn, is said to derive from an East Indian word cognate with Pali sigivera. Common name of pine cone ginger is in reference to the pinecone shape of the inflorescence. Shampoo ginger common name relates to the creamy liquid substance in the cones which may be extracted by squeezing for use as a hair shampoo and/or hair conditioner. This substance is an added ingredient in some commercial shampoos. Wild ginger common name relates to the use of the rhizome as a food additive for culinary flavoring in various cuisines. These rhizomes are clearly edible, but bitter tasting in comparison to the commonly-sold rhizomes of commercial ginger (Zingiber officinale).

Shampoo Ginger is a tall erect, herbaceous plant with pseudo stems growing in clumps. The height of the plant is up to 0.6–2 m tall and is normally found growing in rain forests, thickets, beaches, mangroves, wet roadsides, stream and river banks, shaded forest areas, forest margins, brushwood, mixed forests, teak forests and waste places near villages. The plant prefers rich, moist, well-drained soil rich in humus. The leaves and inflorescences of the pinecone ginger arise from a thick knobby rhizome that grows just under the surface of the soil.

The leaflets are arranged alternately along an arching pseudo stem that grows one to two meters (3 to 7 feet) in length. Leaves are numerous, distichous, sessile or shortly petiolate, green, simple, entire, lanceolate or oblong–lanceolate. They are 15–40 cm long and 3–8 cm wide, glabrescent or abaxially somewhat pilose, base narrowed and apex acuminate.

The inflorescence is borne on a separate pseudo stem from the leaves. It is a spike; bracts subtend the position of each of the flowers giving the inflorescence its pinecone shape. The inflorescence is green until flowering. The green cone turns red over a couple of weeks and then small flowers appear on the cone. The inconspicuous, 3-petaled pale yellow or white flowers emerge from the lowest bracts first, when the flower is spent, it dries and falls away. After flowering, the bracts change color. The color change continues upward until the entire inflorescence is bright crimson. This is an excellent fast-growing landscape plant for tropical effect, and the cone shaped flowers are long lasting and useful for cut flower arrangements. Flowering normally takes place from July and September.

Flowers are followed by ellipsoid or obovoid fruit that is about 0.8-1.5 cm long. The fruit is initially green in color and later turns to red as they mature. 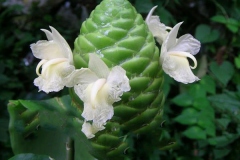 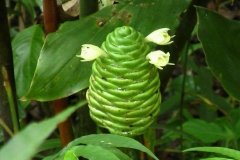 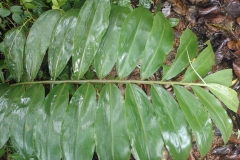 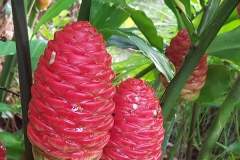 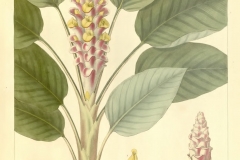 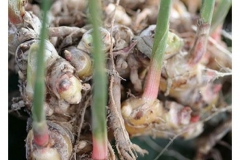 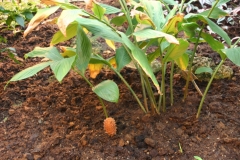 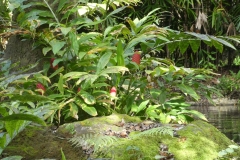 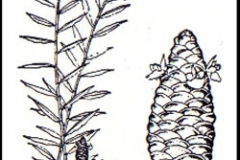 1. Prevent the Progression of Cancer

Content contained in shampoo ginger has the ability to inhibit cancer cells that will grow in the body. Cancer cells induced will be inhibited even prevented the growth of cancer. So that, the body will be protected from the attack of cancer. (1)

Shampoo ginger has content similar to health benefits of Curcuma which is able to increase appetite. Decreased appetite should not be taken too lightly because the lack of nutritional intake and vitamins will derive several health problems for the body. (2)

Rhizome of shampoo ginger plants is very effective for dealing with diarrhea and even dysentery. Health disorders that attack the body’s digestive system are prone to attack children, adults and even elderly. (3)

Hemorrhoid can be a dangerous health disorder if not treated on time. To avoid the negative impact of the symptoms, we should use shampoo ginger to relieve symptoms. How to use: First, take the ¾ segment of Shampoo ginger rhizome that has been washed and grated. Then, add two tablespoons of boiled water and salt with a small dose. Drink the juice twice a day at a tablespoonful. (4)

Fever that occurs in children can cause seizures if it is not treated promptly. Thus, you should use shampoo ginger as a traditional medicine that can relieve the heat because of the content of anti-seizure substances in it. As well as the benefits of white radish which is used to relieve fever, the benefits of this shampoo ginger will relieve a fever that also contains Paracetamol.

Some people use to experience skin problems due to allergies to food that they consume. Therefore, it needs to be treated by using traditional medicine made from shampoo ginger. While there are some people that prefer to DIY their wild ginger shampoo you can also buy it conveniently premade if you prefer. As for the way to use it is, first, slice the parts of bitter ginger rhizome and then brewed like tea and drink regularly until allergy symptoms are healed.(5)

Cough is a health disorder that disturbs our everyday activity. Shampoo ginger can help to relieve a cough. First, mix the rhizome of bitter ginger with roasted or baked onion and cinnamon. Then, crushed and squeeze it out to remove the liquid that will be drunk. (6)

There are many health benefits of shampoo ginger. A weakened immune system can cause a cold that will disturb the potential of body’s performance. To overcome these health problems, we can use shampoo ginger as an herbal that can be combined with other natural ingredients.

How to use: First, take one rhizome of shampoo ginger that has been washed, grated and squeezed. Then, filter the juice of shampoo ginger and add two spoons of honey in half a glass of boiled water in warm temperatures. Drink twice a day frequently until the condition of the body gets improved.

Low blood pressure will disturb the daily activity. Because the body will feel weak and the vision will be blurred, so that it will lead to unconscious conditions or fainting. Content contained in the shampoo ginger can increase the number of platelets in the blood. How to use: First, shred the rhizome of shampoo ginger then mix with sugar and water, and then boil it. This drink can be consumed 3 times as much as one tablespoon in one day. (7)

Legs are part of the body that can experience health problems in the form of excessive feeling supplemented by a sense of pain in the leg bone. One of the health problems occur in legs is rheumatic. Rheumatic can be treated by shampoo ginger. Mix the rhizome of shampoo ginger with chili java that has been crushed and then add with a mixture of dry rice. The various compositions are mixed evenly and then attach to legs or body parts that feel pain or rheumatic. (8)

Some of the women who have passed the process of childbirth usually experience swollen foot. To overcome this problem, you should make a mixture of shampoo ginger to recover the condition of feet. First, take the rhizome of shampoo ginger and chili Java and then crushed with a little water. Squeeze the cloth and then the juice is drunk at the appropriate amount.

TB disease is a disease that cannot be undervalued because of the symptoms and its effects on the health condition of the body. So, we should treat it using traditional medicine with shampoo ginger as the main ingredient. The content in it helps to neutralize toxins in the body. First, prepare shampoo ginger that has been washed and then cut and boil using clean water. After that, drink three glasses in one day to treat TBC.

Slim and ideal body would be the desire of everyone, including the men. Content contained in shampoo ginger is able to make the body’s metabolism becomes more smoothly so that the process of burning fat becomes more leverage.

When the body gets symptoms of contracting malaria disease, then you should treat using rhizomes of shampoo ginger combined with the other plants. First, prepare shampoo ginger that has been smoothed, then add one cup of pineapple and salt to taste. Finally, drink with a half cup in one day to increase immune system of the body. (9)