Trending
You are at:Home»Herbs and Spices»Health benefits of Snow Fungus 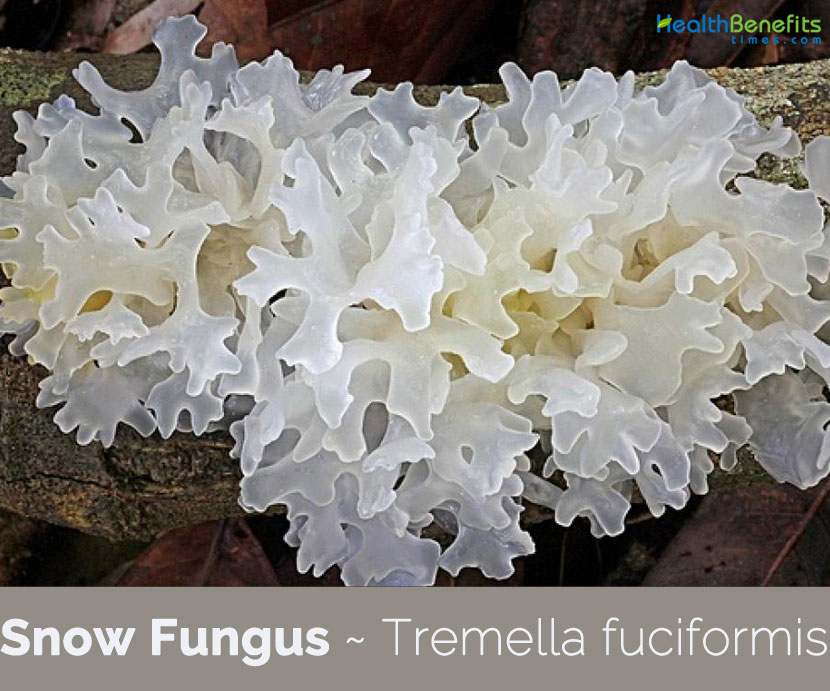 Snow Fungus is a white, nearly translucent, trembling fungus or parasitic yeast up to 7.5 cm (3.0 in) across and not more than 12 mm tall and is composed of thin but erect, seaweed-like, branching fronds, often crisped at the edges. It produces white, frond-like, gelatinous basidiocarps (fruiting bodies) that are 43–63 mm long and 35–42 mm broad, firm shapeless, gelatinous fruit bodies, translucent, mucilaginous when fresh, becoming horny, thin, grey to yellowish-grey colored when dry, repeatedly lobed or forked with margins flexuous to folded, sessile. It is widespread, especially in the tropics, where it can be found on the dead branches of broadleaf trees. This fungus is commercially cultivated and is one of the most popular fungi in the cuisine and medicine of China.

Microscopically, the hyphae are clamped and occur in a dense gelatinous matrix. Haustorial cells arise on the hyphae, producing filaments that attach to and penetrate the hyphae of the host. The basidia are tremelloid (ellipsoid, with oblique to vertical septa), 10–13 by 6.5–10 μm, sometimes stalked. The basidiospores are ellipsoid, smooth, 5–8 by 4–6 μm, and germinate by hyphal tube or by yeast cells.

The fungus gets the common name of wood ear for the way it looks on the decaying logs on which it grows. Good-quality snow fungus has a pale, yellowish-white color and mucilage like texture. Chinese and Japanese herbalists have used snow fungus for more than 2,000 years, mostly to increase fluids in the body, for dry coughs, and for palpitations. It has been used as a tonic herb and as a beauty enhancer to improve the complexion. Its collagen content is comparable to bird’s nest. Hence, it’s also why white fungus is dubbed as the ‘poor man’s bird nest’.

Snow Fungus is native to subtropical and tropical regions around the world including Brazil, Taiwan, China, Japan, and other Asian countries. Cultivation of the fungus began around 1914 in China and new cultivation techniques began in 1968, leading to the mass production of the variety and the ability to export the mushroom in dried form worldwide. Up until this time, Snow Mushrooms were for the exclusive use of royalty and the very wealthy. Today Snow mushrooms are found fresh at local markets or in dried form in Asia, Southeast Asia, South America, Central America, Australia, New Zealand, Africa, and North America. 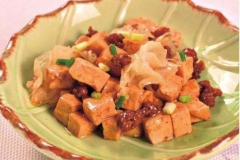 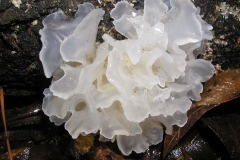 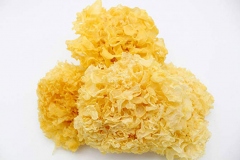 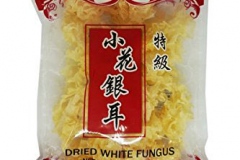 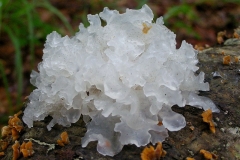 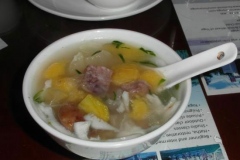 Snow Fungus consists of good amount of iron, vitamin C, calcium and phosphorus. The fat and gum like protein in it is particularly beneficial for the body. It is considered a good supplement to the body. Stew white fungus with rock sugar lubricates the colon and stimulates peristalsis. Thus, it is a mild laxative for constipation patients. Listed below are few of the popular health benefits of Snow Fungus

Scientific studies in cells and animals have found that the mucilage-like polysaccharides found in snow fungus fit like keys into receptor sites on certain immune cells. Snow fungus also increases the activity of natural killer (NK) cells and improves the effectiveness of antibodies. In addition, snow fungus reduces the rate at which cancers spread in a laboratory setting. In order to grow and spread, tumors have to establish their own blood vessel systems. Snow fungus compounds counteract a blood chemical platelet-activating factor (PAF), which makes the blood less likely to clots and spins a fibrin “net” on which blood vessels to serve the tumor can form. None of these actions have been confirmed in humans.

With a gelatinous structure and high amounts of polysaccharides, Snow Fungus has been hitting the headlines in cutting edge skincare due to its surprising ability to boost skin hydration. The Snow Mushroom also has the ability to generate a flexible hydration film that helps to restore dry skin to its optimally hydrated state. This helps to restore elasticity, and with over 18 amino acids, anti-inflammatory and antioxidant properties, Snow Fungus helps to accelerate wound healing, aids in collagen production for plumper skin and boosts overall skin health.

Recent research has determined Snow Fungus to be beneficial in healing atherosclerosis by stimulating DNA synthesis in vascular endothelial cells – cells that line the interior surface of blood vessels. The dysfunction of these cells is a major factor in the pathogenesis of atherosclerosis, hypertension (high blood pressure) and thrombophlebitis (a circulatory problem caused when a blood clot slows circulation). Snow Fungus has also been shown to protect endothelium cells from histamine damage and increase clotting time.

Fatigue is a symptom of tiredness caused by stresses (physical and/or psychological). Polysaccharides and other antioxidants found in snow ear mushroom can help to prolong the time for skeletal muscles to become fatigued. It encourages protein and RNA synthesis, which helps to maintain the normal function of the liver and avoid fatigue. Thus consumption of white jelly mushroom improves muscle function and treats fatigue.

Snow Fungus is rich in polysaccharides, compounds which have potent immune boosting qualities. The particular polysaccharides contained in this fungus improve the secretion of interferon and interleukin, vital immune system components which provoke the manufacture of germ consuming macrophages.

Snow Fungus also improves and enhances the action of NK (natural killer) cells, a type of white blood cell that safeguards the body from viruses and bacteria. It also improves the effectiveness of antibodies which are also used by the immune system to fight bacteria and viruses. Snow Fungus is considered to be especially effective for old people with a weakened respiratory system, and for dry coughs in traditional Chinese medicines.

The gelatinous structure of the Snow Fungus is remarkably similar to that of the brain and it does certainly contain compounds that can protect this important organ. Research has discovered that Snow Fungus has neuro-protective and neuro-trophic effects. It promotes neurite outgrowth and helps prevent b-amyloid toxicity, making it a probable precautionary agent in neuro-degenerative diseases such as Alzheimer’s.

Snow Fungus also increases super-oxide dismutase (SOD) activity in the brain. SOD is an important protective enzyme of the brain that forms the first line of defense against pathogens to the brain.

Snow Fungus has polysaccharide which prevents and treats neurodegenerative diseases like Alzheimer’s. As it improves neurite outgrowth, which was encouraged by the nerve growth factor, reduced the neurotoxic effect and prevent reactive oxygen species accumulation.

Snow fungus offers additional hydration to the skin; it helps keep wrinkles at bay. By encouraging your skin to retain as much moisture as possible, it ends up smoothing the skin’s surface and making you look younger. This increased elasticity is likely what makes snow mushroom so popular right now. Hydration is great, but the anti-aging effect of the ingredient is what will give it staying power in the beauty business.

For those with more sensitive skin, snow mushroom is really a life-saver. Because it naturally breaks down harmful free radicals in the skin and decreases inflammation, it can recover your overall complexion. It also doesn’t typically cause skin reactions, making it milder than some of the harsher chemicals often found in traditional beauty products.

Snow mushroom has the power to encourage cell growth, which allows the substance to help with wound healing. Because it also has a high vitamin D quotient, another factor that aids in alleviating skin abrasions, the mushroom would be super useful for soothing stubborn blemishes, or ones you might have popped or picked at. Using this super beauty ingredient may help smooth and soothe the irritation and help it go away faster.

There are many ways to take Snow Fungus, from using it on the skin to consuming it as a food. Because fresh, whole Snow Fungus is not easily available outside of Asian countries, here are some convenient ways to use these nutrient-dense fungi.

Chances are it’s going to become easier to find Snow Fungus in skincare products, particularly those offering anti-aging benefits. Look for natural products that are free from synthetic chemicals, parabens, phthalates, sulfates, and other questionable ingredients that can worsen dry skin or cause irritation.

Probably the most common and convenient way to find Snow Fungus is in a finely ground powder. Thanks to its mild, delicately sweet flavor profile, it’s easy to add Snow Fungus powder to smoothies, acai bowls, parfaits, yogurt, even tea.

You can find liquid Snow Fungus extract that can be squeezed into water, drinks, or food. Only buy from reputable brands and start small—consider starting with just 1/4 tsp. for a week before increasing dosage if necessary and pay attention to how your body feels. 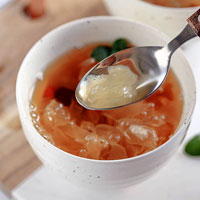