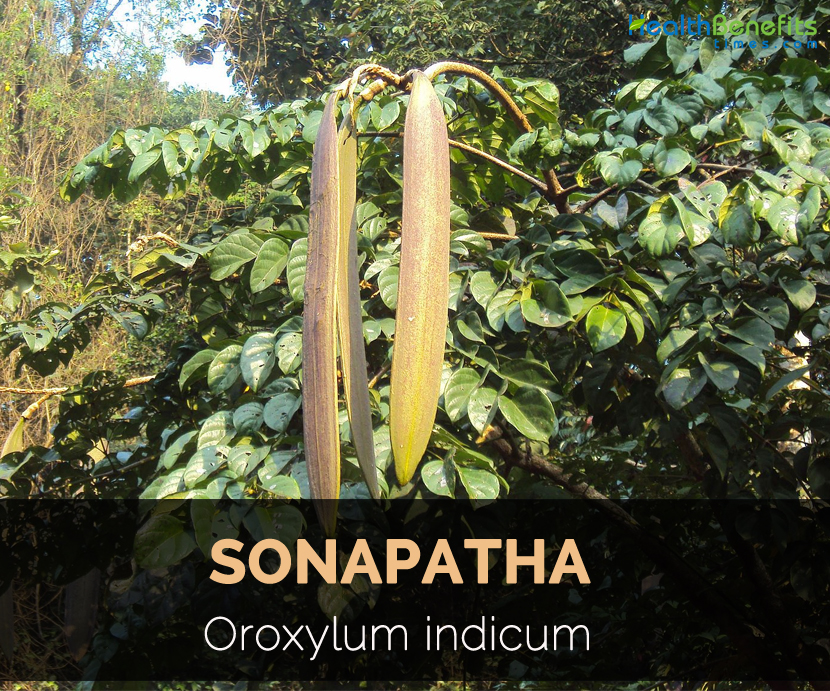 Sonapatha (Broken Bones Plant) is grown in India, South China, Sri Lanka, Malaysia, Celebes and Philippines. The name of the genus is derived from the Greek word oros which means mountain and xylon which means wood. It refers to the mountain areas where it is present.

The tree is small to medium sized deciduous tree that measures 12 meters high with soft and light brown bark having corky lenticels. It is a night bloomer with pinnate leaves which are about 1 meter long and wide borne on petioles or stalks upto 2 meters long. Flowers are followed by enormous seed pods (fruits) about 1.5 meters long which hang down from bare branches that resemble swords. Seeds are round having papery wings. Flowers are pollinated by bats.

The bark is brownish to grey and soft covered by various corky lenticels.

Leaves are 2 to 3 pinnate having opposite pinnae which is very large about 3-7 cm long and ovate or elliptic. Leaflets are 2 to 4 pairs having terminal odd one, opposite, 7-17 x 3.5-10 cm lamina and ovate or elliptic and has glabrous texture. Apex is caudate to acuminate, asymmetric or rounded base, entire, glabrous and chartaceous margins. 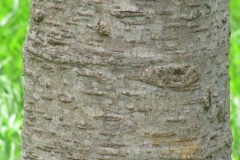 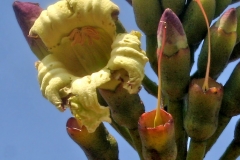 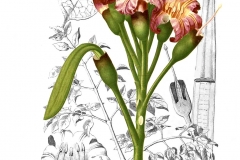 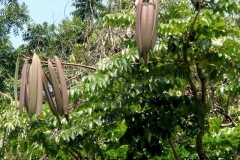 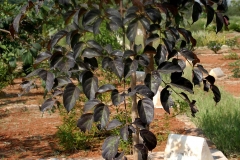 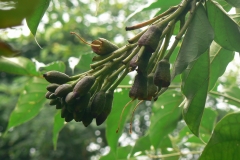 Flowers are large, reddish to purple and are pinkish to yellow inside.

Flowers are followed by a flat, brown, 30 to 90 cm capsules which encompasses flattened seeds having hyaline papery wings.

Sonapatha possess antibacterial properties. The ethyl acetate, methanolic and ethanolic extracts of stem bark is tested on various species of gram positive and negative bacteria such as E.coli, Bacillus subtilis and Pseudomonas aeruginosa. These extracts were shown to possess antibacterial properties. The dichloromethane extract was shown to possess antifungal activity. An ethanolic extract possess maximum activity against both strains of bacteria.

The formation of oxidative species and free radicals associated with stress results adverse effects on various tissues of the body and vital organs. Antioxidants are effective in treating and preventing several diseases. Bark and leaves extract have maximum reductive ability and high free radical scavenging activities than stem, bark and fruit extract. The methanolic or aqueous extracts of stem bark possess diverse therapeutic properties. It has various properties such as cytotoxicity, antioxidant property and protection against oxidative damage and free radical scavenging activities. The extracts show extensive cytotoxicity in tested cell lines.

Leaves and root decoction of Sonapatha is used as prophylaxis for kidney problems and eliminate kidney stones in Indian medicine. An ethanolic root extracts exhibits protective effect against cisplatin induced renal injury in rats. It is shown that various flavonoids possess nephroprotective activity. The experiment conducted on chrysin isolated from roots of Sonapatha evaluated for protective activities against cisplatin induced nephrotoxicity.

The antidiabetic properties of Sonapatha have been evaluated in animal models. The aqueous and methanolic extracts of leaves exhibits antidiabetic activity against alloxan induced diabetes in rats. The methanolic or aqueous extract at dose of 300 mg/kg for 21 days helps to restore serum biochemical parameters such as fasting level of blood glucose, biomarker enzymes, lipid profile, serum creatinine, serum total proteins, serum SGPT, SGOT and ALP to normal. When compared to aqueous extract, methanolic extract has more antidiabetic effect.

Sonapatha shows anticancer activity in animal experiements by various types of carcinogens and in human cell lines by various experiments. An ethanolic extract shows antiproliferative effect on Hep 2 cell lines. Baicalein is a flavonoid found in Oroxylum indicum that have been isolated and tested on induction of apoptosis in HL-60 cell line. Study results shows baicalein’s anti-tumor effect on human cancer cells.