Trending
You are at:Home»Herbs and Spices»Alfalfa sprouts nutrition and benefits 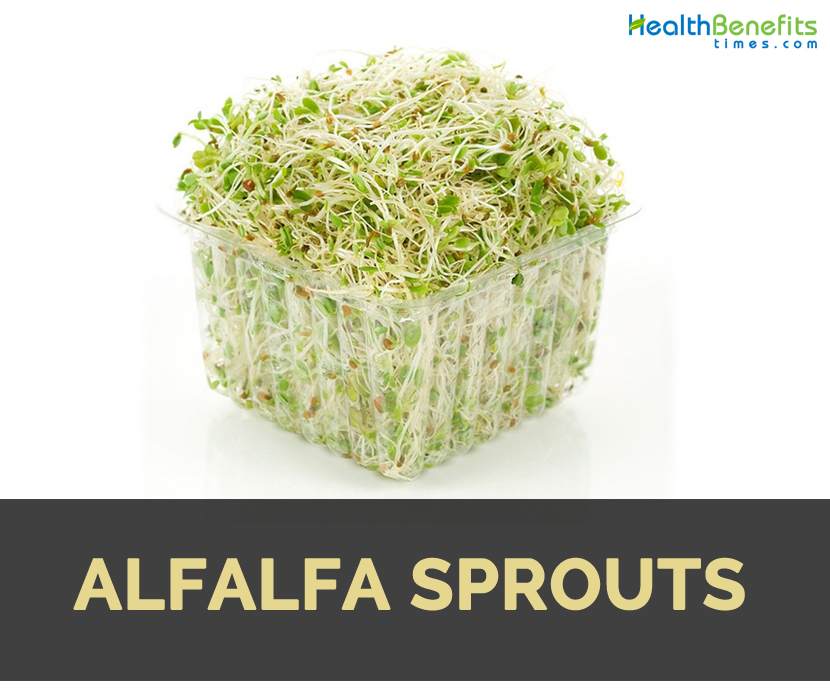 Alfalfa Sprouts, also known as Medicago sativa, is a flowering plant that belongs to the pea family. Also known from common names such as California clover, Buffalo herb, Lucerne, Spanish clover and Purple clover. The plant originates in eastern Mediterranean and western Asian areas where it is cultivated for more than a millennium. It bears tiny violet flowers when plant reaches to full maturity. Alfalfa is used as fodder for feeding cattle in form of alfalfa hay.

Alfalfa sprouts are the germinated alfalfa seed which forms a shoot when harvested before the plant is fully matured. It is found in oriental dishes which are added to soups, top of sandwiches and salads. Sprouts are healthier as the sprouting process offers various enzymes. It carries various protein, minerals and vitamins and also lower proportion of starch in comparison to unsprouted seeds. Starches are converted to simple sugars and are easier to digest.

Using alfalfa sprout seeds dates back to 5000 years when Chinese physicians used the sprouts for medicinal purposes. In 1700s, the ability of sprout is found to prevent scurvy which is the common cause of death on long voyages. Amid World War II, Dr. Clive McKay (a nutrition professor of Cornell University), discovered the idea of sprouts into prevailed Western food culture. McKay and his team of researchers learned the bean sprouts a nutritional food source and bean sprouts to be easily cultivated. It is a vegetable which could be grown in any climate and gets mature in 3 to 5 days, could be planted any day of the year which requires neither soil nor sunshine. Alfalfa has high content of vitamin and is used as a nutritional supplement.

Each part of alfalfa plant has its benefits. These sprouts have abundant source of minerals and vitamins which are crucial for proper functioning of body and prevent various health ailments. Make a wise move by adding alfalfa sprouts to the diet to obtain the listed health benefits below:

The serving size of a cup of alfalfa sprouts fulfills 13% of daily Vitamin K requirement. The daily requirement of Vitamin K for men is 120 micrograms and for women is 90 micrograms. Vitamin K is regarded as blood clotting vitamin. Regular intake of a cup of alfalfa sprouts assures prevention from hemorrhagic problems in future. The high content of Vitamin K speeds up healing of wounds and prevents critical situations which arise.

Low production of hemoglobin signalizes anemia. When body has deficiency of iron, it declines red blood cells count. It causes heavy menstrual flows and foods with low iron results nausea, fatigue, and general lethargic states and absent mindedness. Low levels of iron promote the chances of infection in children and pregnant women. Alfalfa sprouts have adequate amount of chlorophyll, iron and Vitamin K which promotes the blood production and beneficial for treating bleeding gums and nosebleeds.

Chlorophyll is a green pigment which provides color to alfalfa. It is a powerful substance required for healing and cleansing properties. It is able to detoxify body and eliminate impurities from pollution. It also helps to counteract infection. Alfalfa sprouts helps to break down carbon dioxide and halt reproduction of anaerobic bacteria. Moreover, alfalfa sprouts have high content of vitamin A and enzymes required to improve skin complexion. It also hydrates dry skin and makes it smooth.  Dry skin has become the common skin problem these days. Daily intake of nutrients helps to maintain and construct skin to keep it radiant and healthy.

These sprouts are found to be helpful for weight conscious individuals. It has low content of calories, sugar and fat. Alfalfa sprouts have high content of fiber and is a great source of protein. The fiber content inhibits release of ghrelin which is a hormone triggering hunger, fills up and prevents snacking.

Alfalfa sprouts are considered as blood purifiers as it prevents morbid conditions that hold infection. Alfalfa sprouts are used to address skin eruptions such as chicken pox, acne, psoriasis and eczema. Alfalfa sprouts have detoxification properties which is beneficial for cleaning the blood and assist liver and kidney functions. Bacteria accumulation in the bloodstream is the major cause for blood poisoning which is life threatening as well. It could be prevented with the use of blood purifying herbs such as alfalfa which has anti-microbial activity.

Alfalfa sprouts helps to address digestive ailments, inflammation and tooth decay. It features high ratio of digestive enzymes such as amylase, lipase, invertase, coagulase, pectinase and proteases. The enzyme has its own function but promotes digestive health.

Additionally, consumption of alfalfa sprouts prevents indigestion or excess gas by supporting food digestion. The digestive enzymes ease to breakdown of fats, carbohydrates and proteins which upset stomach. Alfalfa sprouts have high potassium content that helps to lower water retention in body parts. Potassium is a crucial electrolyte which acts as diuretic and lowers swelling caused by water retention. Its primary function is to promote digestive regularity which is helpful for chronic constipation.

Alfalfa sprouts provide calming effects to the body and assist to cope with stress and lowers anxiety. It enhances sound sleep for people with insomnia. Alfalfa is filled with estrogens that could combat symptoms of menopause such as vaginal dryness, mood swings, hot flushes and decreased libido. The production of estrogen lowers in menopausal women. The presence of phytoestrogens in alfalfa sprouts form estrogenic effects and lowers menopause symptoms.

Alfalfa sprouts assist in regulating the pH level of stomach. When body struggle in food digestion, stomach has to create more acid to breakdown food. This result in heart burn and acid reflux caused due to high concentration of acid. Alfalfa sprouts are alkaline foods which lower stomach’s acidity and enhance its pH. It lowers the chances of developing painful gastric ulcer.

Alfalfa sprouts have rich content of amino acids which enhance hair growth. Adding alfalfa sprouts to the diet provides sufficient protein required for healthy hair. It has high content of Vitamin B6 and Vitamin B1 which are found to be beneficial for healthy growth of hair. It addresses hair fall and hair thinning. Alfalfa sprouts have silica in it that prevents baldness. Moreover, it has abundant amounts of Vitamin C supporting blood circulation in scalp and antioxidant activities in hair follicles and also boosts the collagen synthesis.