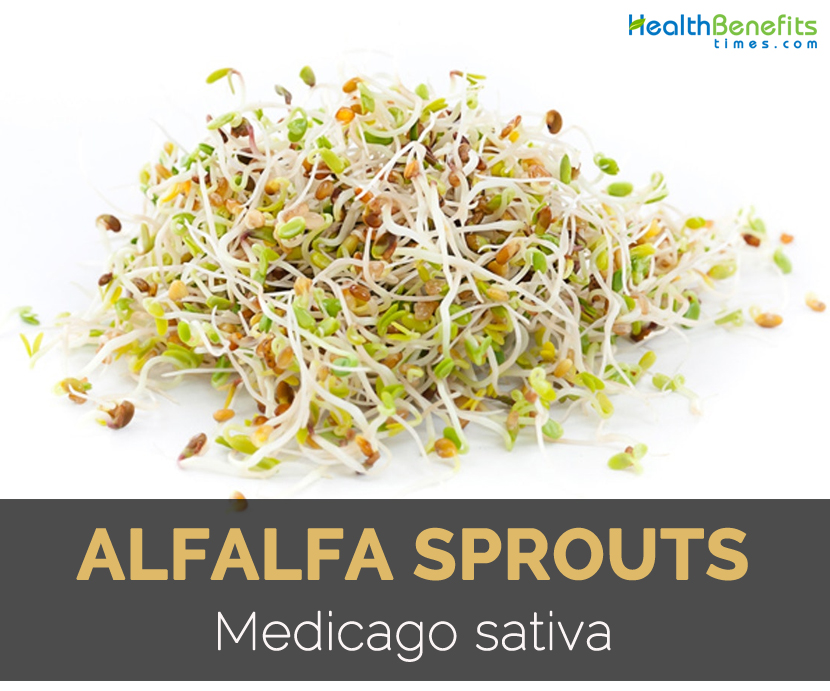 Alfalfa Sprouts bearing scientific name as Medicago sativa, is a flowering plant that belongs to pea family. Alfalfa is known by various names such as Lucerne, California clover, Buffalo herb, Purple clover, and Spanish clover. The plant got originated in Eastern Mediterranean and Western Asian areas where it was cultivated for more than a millennium. The plant bears tiny violet flowers when fully matured. People are using alfalfa sprouts to obtain various health benefits. Until 1970s, alfalfa was not known for its other advantages besides its use as forage. Alfalfa is considered as father of all foods due to its versatility and high content of bioactive plant compounds.

Alfalfa sprouts are immature seedlings of plant alfalfa which are added to sandwiches, salads, soups and as a topping for savory dishes. These sprouts are popular in Asian cultures in local cuisines and could also be prepared at home. Sprouts are loaded with health benefits due to low content of calories and high minerals as well as vitamins. Studies have shown that alfalfa sprouts are beneficial to deal with diabetes and cancer.

Since antiquity, Alfalfa has been cultivated as forage plant and is inherent to Asia Minor and Caucasus Mountains. It was cultivated by Persians, Greeks and the Romans. Believed that, the name Alfalfa got originated in medieval times from Iranian language. In reference to high nutritional value, its Arabic name translates into father of all foods. After the plant was introduced to Spain, the final change in name was made. The plant was considered to be best feed for horsed by Spanish being horsemen. It was called alfalfez and finally it became alfalfa. Alfalfa was introduced by Spanish colonizers to Americas and since then the name was unchanged.

These sprouts are rich in phytoestrogens which assist to lower the chances of heart disease, osteoporosis and cancer. It is also helpful in lowering the symptoms of menopause. It is stated that Alfalfa sprouts contains saponins which has major role in reducing bad cholesterol and increasing good cholesterol and also promotes immunity. Saponins have anti-inflammatory properties which lowers inflammatory problems caused by chronic inflammatory ailments and arthritis. It is also a good source of dietary protein. One serving serves one gram of fiber i.e. equivalent to 3% of daily requirement for an adult. It is beneficial for people with digestive problems such as diverticular disease and chronic constipation. Alfalfa sprouts make a perfect diet food by offering high protein and fiber with no cholesterol, sugar and saturated. Besides lowering bad cholesterol, it also helps to treat and avert atherosclerosis that lead to hardening of arteries.

Alfalfa sprouts are a good source of isolavones as well as other phytoestrogens i.e. plant compounds that imitates human estrogen. Studies with consuming soy foods has high content of isoflavones that shows positive outcomes in lowering chances of death and recurrence in patients of breast cancer. Nutritional journal detailed that alfalfa helps to curb breast cancer.

Alfalfa sprouts contains high content of phytoestrogens and vitamin K that helps to minimize symptoms associated with menopause and menstruation. A blood clotting vitamin, Vitamin K, assist with excessive bleeding. A combination of phytoestrogens and Vitamin K regulates estrogen that helps in minimizing PMS and menopause symptoms. It also balance estrogen levels to lower hormone associated symptoms of menopause such as mood swings.

There is no absolute cure for diabetes but it could be regulated naturally by diet. The study shows that alfalfa sprouts are an effective anti-diabetic being able to reduce the level of blood glucose. The regulation in level of blood sugar is essential for the treatment of diabetes. The diet containing alfalfa sprouts helps to lower the dependency on insulin.

Alfalfa sprouts are rich in antioxidants that prevent damage of cells by free radicals. It promotes overall health and prevents various illness and diseases such as heart disease and cancer. Study shows that alfalfa sprouts has vitamin K which prevents diseases associated with aging such as cancer, osteoporosis and hardening of arteries.

These sprouts have antihyperlipidemic properties which lowers level of lipid in blood. Lower lipid helps to lower symptoms of coronary heart disease caused by high level of cholesterol. The study conducted on monkeys resulted that when alfalfa added to the diet, it lowers the negative effects of cholesterol. It proves that alfalfa is a great food for lowering cholesterol.

These sprouts are rich in fiber which keeps one full without increasing the intake of calories. Moreover, vitamins present in these sprouts assist in stimulation of metabolism, promotes energy metabolism and increase energy levels by helping them to burn fat faster.

Alfalfa sprouts has high content of Vitamin K that promotes the speed of clotting blood in the body, lowering risk of infection and assisting healing process of wounds faster.

Alfalfa sprouts are regarded as food rich in antioxidants and is related with some anti-aging properties such as lowering appearance of blemishes and wrinkles and promoting skin elasticity. Antioxidants help to counteract effects of oxidative stress when consumed regularly in moderate amounts and promotes appearance and glow of skin.

Lower production of hemoglobin signals for anemia which is caused due to deficiency of iron. The red blood cells decrease when body lacks sufficient iron for production of new red blood cells. It might be caused due to insufficient iron rich foods in diet and heavy menstrual flows which results to nausea, fatigue, general lethargic states and absent mindedness. Low level of iron promotes the chances of infections in pregnant women and children. Alfalfa sprouts contains significant amounts of iron, vitamin K and chlorophyll which promotes blood production and is beneficial for treating bleeding gums and nosebleeds.

Alfalfa sprouts purifies blood and helps to address skin eruptions such as chicken pox, acne, psoriasis and eczema. Its detoxification properties help to clean the blood and helps liver and kidney function. Blood poisoning is caused with an accumulation of bacteria in bloodstream that could be life threatening. It could be prevented with the use of blood purifying herbs such as alfalfa which possess anti-microbial properties as well.

Side Effects of Alfalfa Sprouts

Alfalfa sprouts contain immune boosting properties so its excessive consumption is harmful for people with autoimmune diseases such as rheumatoid arthritis and lupus. So consult the doctor before its consumption.

Alfalfa sprouts comprises of active compounds that shows certain estrogenic qualities which is harmful for women who have existing or prone to estrogen related cancer such as breast cancer.

Alfalfa sprouts is able to manage diabetes and suppress increasing blood sugar level which is excellent for those who wants to avoid diabetes. When consumed with diabetic medications, it could lower blood sugar that shows symptoms such as cognitive confusion, lightheadedness, fainting, coma and even death.

It promotes blood clotting activity in the body sue to high content of Vitamin K. People who are prone to blood clots, have cardiovascular events and high blood pressure should consult the doctor before consuming alfalfa sprouts.