Trending
You are at:Home»Fruits»Bilimbi the useful and healthy fruit 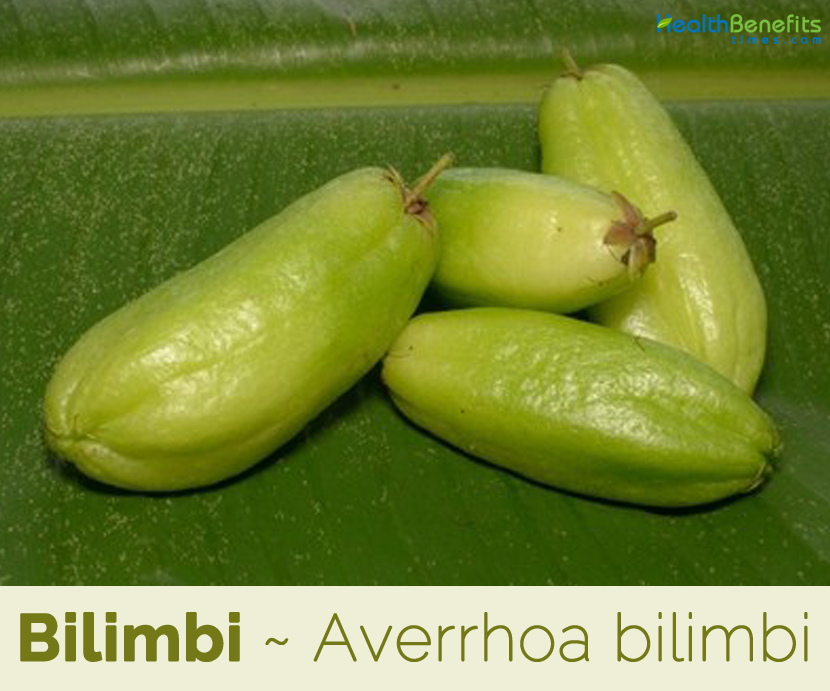 Averrhoa bilimbi commonly known as bilimbi, cucumber tree is a fruit bearing tree of genus Averrhoa, family Oxalidaceae. It is a close relative of carambola tree. The plant is native to Southeast Asia but now found growing throughout the tropics. It is widely cultivated throughout Indonesia, Malaysia, Philippines, Myanmar, Sri Lanka, Maldives, India and Central and South America. The fruit is popular by different names in different languages. Some of the popular common names of the plant are Bilimbi, Bilimbi-tree, Cucumber-tree, Tree-sorrel, Bimbling plum, Pickle Fruit, cucumber tree, Belimbing, asam and pickle. The plant is commonly used as an herbal plant for treatment. The leaves, flowers and fruit are part of the plant that is often used. The leaves are used to treat abdominal pain, mumps (parotitis), and rheumatism. Flowers for treating cough, mouth sores (stomatitis). Bilimbi fruit is often used to treat whooping cough, treat ulcers, prevent diabetes and eliminate acne.

Bilimbi is a small, attractive, long-lived, perennial tree that grows about 16 to 33 ft. (5-10 m) in height. The plant is widely cultivated and freely escaping along rivers and in secondary vegetation. It grows on a wide range of soil from sandy to limestone soil but does best on rich, well-drained, sandy-loam or clayey loam with plenty of organic matter. Leaves are alternate, densely crowded at the top of branches, imparipinnate; 30–60 cm long, with 11–37 alternate or sub opposite leaflets, ovate or oblong to lanceolate, with obliquely rounded base and acuminate tip, 2–10 cm long by 1.25–1.5 cm wide, downy; medium-green on the upper surface, pale on the underside.

Flower is bisexual, pentamerous and 10–20 mm long. Sepals are ovate-lanceolate, 4 mm and pubescent. Petals are reddish purple, 13–18 × 3 mm. Stamens are all fertile. The fruits are small, with cylindrical-elliptical shape. It is around 4-10 cm long and 1.5-3 cm in diameter. The fruit is green when young turning to yellowish green or white when ripe. The fruit is glossy with a thin skin, juicy and very acid. Seeds are flattened disc shaped, small (6 mm) and brown. The fruits are attached to the tree trunk. It’s common to see a bilimbi tree trunk full of fruits during fruiting season. The fruit is crunchy when it’s unripe. When ripe, the fruit falls to the ground. Once harvested, bilimbi fruit has short shelf life, only 5 days. Its skin is also easily bruised just by handling. Because of these reasons, it is difficult to transport these fruits over long distance.

The fruits can be preserved by sun drying. The dried bilimbi fruits are called “asam sunti”, used in many Asian soups and curries. Most of bilimbi fruits taste sour due to high content of oxalic acid, except the “kamias” variety from Philippines which is sweet-sour and can be eaten raw. Since it is considered too sour to be eaten raw, bilimbi fruit is usually used in cuisines, such as salads, fish soups and curries. The high acidity gives refreshing taste to the cuisines. Meanwhile, bilimbi fruit is used in traditional medicine throughout Asia because of its high acidic properties.

History
Bilimbi tree is found in tropical countries throughout the world. It is supposed to have originated in Indonesia or Malaysia. Bilimbi trees can be commonly found growing in home gardens throughout Southeast Asia. It is also cultivated in many parts of the Caribbean and central and southern America, where it is known as Mimbro. It is also commercially grown in Australia. Bilimbi fruit have been traditionally used for therapeutic purposes, such as for the treatment of diabetes and hypertension. The oldest record of the plant was found in Egypt in the 14th century. The Bilimbi tree grows best in warm, sunny climates, where temperatures are within the range of 23 to 30 degrees Celsius. It prefers well-drained, sandy soil.

Bilimbi plant has numerous health benefits, from the fruits, leaves and young stems. Bilimbi fruit consists of antioxidants and has astringent effect due to its high acid. As a result, here are some of the popular health benefits of bilimbi you never know it before.

Bilimbi fruits are used as a traditional medicine to control obesity in India. Native people consider that bilimbi fruit contains anti-hyper-lipidemic agents, so it can prevent weight gain. As we know, obesity can lead into various diseases. And it doesn’t look good either; obesity is frowning upon in many cultures because it displays lack of self-control and lack of self-respect. Obesity also makes our skin and hair look dull and old.

Sap from young stems and the leaves are used in traditional medicine to reduce swelling, rheumatism, itch, and insect bites. Young stems and leaves are mashed with 3-4 cloves of garlic and made into smooth paste. Paste is applied to the affected area of the skin. The astringent effect will reduce the swelling and pain in rheumatism, also reducing the swelling caused by skin eruptions and insect bites.

Allergy is a condition caused by the hypersensitivity of the body’s immune system towards some particular things outside of the body. Particular things can be foods, drugs, air, metals, etc. The symptoms may include red eyes, breathing disturbance, runny nose, itching on the skin, even more serious ones like Steven-Johnson syndrome. Drinking bilimbi fruit juice or bilimbi leaves infusion regularly helps to reduce the allergies.

Hypertension is a condition related with the rise of blood pressure in the arteries. Bilimbi fruit has been used traditionally to control hypertension. Bilimbi fruits are boiled with 3 cups of water until half of the water has evaporated, and then the decoction can be taken once it’s lukewarm. It is recommended to drink this decoction every morning for better result.

Mumps is a disease caused by mumps virus. This virus usually attacks parotid salivary glands, can be one or both parotid glands. The disease results in painful swelling in parotid glands. Applying the paste of young stems and leaves of bilimbi with garlic can give positive effect in reducing the swelling.

Bilimbi leaf tea is beneficial for people suffering from the painful and embarrassing problem called hemorrhoids, which is also sometimes known as piles. The anti-inflammatory properties of bilimbi leaves can help in reducing swelling down there, resulting in reduced pain and bleeding, too.

Bilimbi fruit decoction is used for centuries to treat fever. Flower is made into infusion for treating cold and cough. The high vitamin C in this fruit helps strengthen immune system.

Leaves of the bilimbi tree are pounded and turned either into a paste or poultice, which may then be applied directly on painful muscles. Unlike conventional painkillers and non-steroidal anti-inflammatory drugs, bilimbi leaves help ease muscle pain without causing unfavorable side effects.

Bilimbi fruit extract has been added to cough syrup, due to its positive effects in reducing coughs and runny nose. Sour taste also makes the cough syrup more palatable.

Paste or poultice prepared from bilimbi leaves is highly effective for dealing with joints that are swollen, stiff and achy. It’s due to the fact that the leaves possess both analgesic and anti-inflammatory properties. By the way, tea out of bilimbi leaves may also be taken internally for relief from swollen joints from within.

Teeth and bones usually become weaker and less dense as we grow old. Calcium supplements might be a good option, but filling up on calcium-rich food is much better. Kamias or bilimbi fruit is the most prominent and can support your entire skeletal structure. Phosphorus complements calcium by increasing the mineral’s effectively by adding density and strength to teeth and bones.

Oxalic acid and vitamin A found in bilimbi fruits helps reducing pimples, soothing the painful inflamed ones. Vitamin C helps make the skin brighter, reduce black spots and keep the skin tight because it promotes the production of collagen, a substance needed to keep the skin tones.

To remove the pimples, put mashed bilimbi fruits on clean face as a face mask. Let it sit at least 30 minutes or until the mask dry, then wash the face with warm water. Do this every day, for at least 3 days. You can also add bilimbi fruits in your juice or fruits to add nutrients and refreshing taste. With bilimbi face mask and drinking bilimbi juice regularly, our face will look brighter, youthful and black spots will go away.

Paste prepared from bilimbi leaves is an age-old remedy for insect bites. Simply daub the paste on trouble spots to immediately attain relief from the throbbing pain. Paste out of the leaves of the bilimbi tree is also very good at preventing those insect bites from swelling, as well as keeping scarring at bay.

Bilimbi tree can grow rapidly, mainly in tropical area with plenty of rain. Woods are excellent for carpentry, such as making home furniture.

Bilimbi tree is ideal to plant in the backyards and gardens because of its medium size and the shade it provides. The purple flowers are beautiful with lime-green fruits hanging on every branches and trunk, making the tree look nice and “prosperous”. In India, the bilimbi trees have gone wild in warmest region of the country. It’s good to have plants at home, as it can increase the flow of oxygen around.

Traditional uses and benefits of Bilimbi 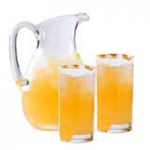 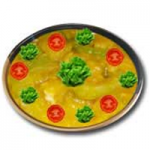 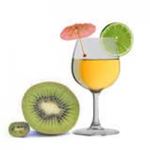