Trending
You are at:Home»Foods»Sprouted Bread facts, health benefits and recipe 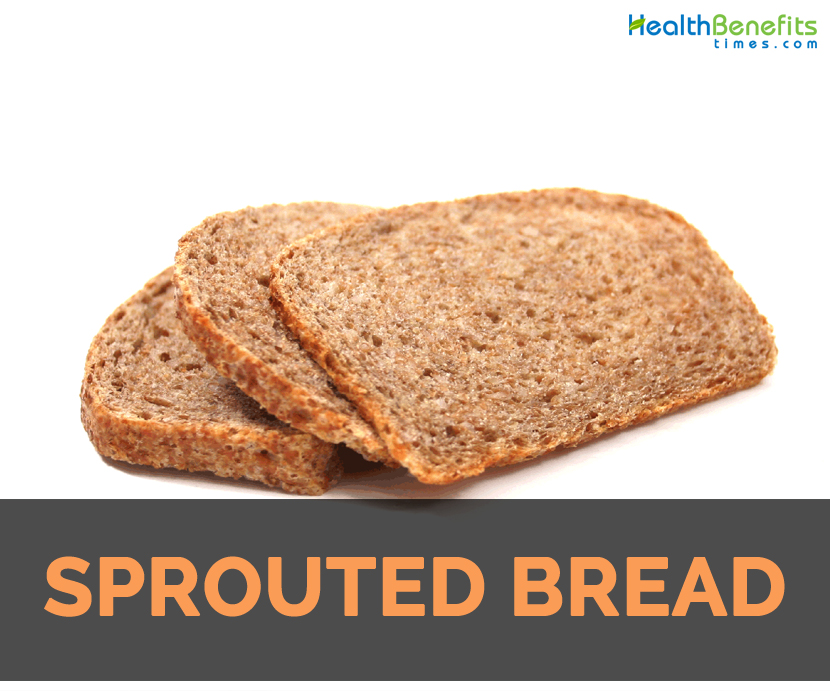 Sprouted bread is a bread type which is made from whole grains sprouted to germinate before milled into flour. It differs from white bread because white bread is made from ground wheat endosperm. The breads made with whole grain include germ, bran and endosperm which provide much fiber and naturally occurring proteins and vitamins. The nutritional analysis made showed that sprouted grains contains 75% of carbohydrates, 40% of fat and slightly higher protein in comparison to whole grains. Sprouted breads have more trace minerals and nutrients in comparison to non-sprouted breads.

Sprouted flour means using the whole kernel i.e. the entire grain or seed. And germination of grains and seeds literally enhance their nutritional benefits which allow receiving the maximum nutritional benefit inherent in the grain. When a seed is germinated by soaking in water, this activates enzymes that initiate the transformation of the germ into a viable growing organism. To support that process, the nutritional value of the seed improves. In addition, sprouting softens the bran, reduces its phytic acid (which inhibits nutrient absorption), renders it less bitter, and makes the grain’s minerals more bioavailable. And when those grains or seeds are ground into flour, the resulting bread tastes better, is higher in nutrients, and is also easier to digest, allowing the body to access more of its nutrients. Anecdotal reports also indicate that some people who are usually sensitive to wheat can tolerate sprouted wheat without typical reactions, such as indigestion or rashes.

Sprouted bread is a great alternative to whole grain flour bread or white flour bread. It is gaining much popularity among health conscious people and also with mild sensitivities to wheat or gluten.

Regular bread contains phytic acid which is considered to be an enzyme inhibitor and mineral blocker. Also called phytates, phytic acid is found in seeds and nuts, grains and beans. Phytic acid could be eliminated by soaking grains and sprouting it. Soaking destroys phytic acid that essentially unlocks nutrients so that body could absorb iron, magnesium, zinc and phosphorus which are found in whole grains.

Sprouted grains have more digestible proteins and gluten. Gluten is a sticky protein found in wheat which causes intestinal inflammation leading to problems such as leaky gut syndrome. Sprouted grains assist the gluten to predigest so that it could be easily break down and digest.

Sprouted grains are easier to digest with high content of fiber and whole food based nutrients. Studies have shown that sprouting seeds promotes the fiber content. It also increases the concentrations of crude fiber which is a fiber that makes up plant’s cell walls. Literally, fiber could not be absorbed by the body within digestive tract but assist to push toxins and waste out of the gut and also regulates bowel movements.

Liver is a vital organ and is prone to various threats such as fatty liver disease. Sprouted bread possess low content of fats in comparison to traditional grain based breads and is related with healthy liver function by eliminating toxins.

Bread made with sprouted legumes and grains limits allergic response of the body. It signals immune system not to react and cause inflammation in the body.

Sprouting and Drying Grains for Flour

Before the recipes, briefly review the process of sprouting seeds and preparing them for milling. 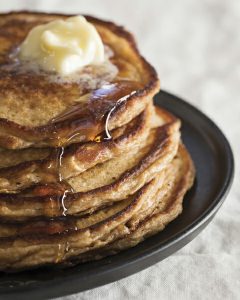 SPROUTED WHEAT FLOUR WAFFLES: This batter could be cooked in a waffle iron. If making waffles, it is recommended doubling the recipe, since the waffle iron gobbles up a lot of batter. Also, separate the eggs. Add the yolks to the batter, and whip the whites until stiff, then fold them into the batter for additional aeration. To cook, follow the instructions for waffle iron.

SPROUTED MULTIGRAIN PANCAKES: Replace about ¼ cup (1.1 oz / 30 g) of the sprouted whole wheat flour with an equal amount of any combination of other sprouted flours, such as corn, buckwheat, millet, sorghum, or quinoa.

BLUEBERRY PANCAKES: Add 1 cup of fresh or frozen blueberries (or other fresh berries) to the batter. 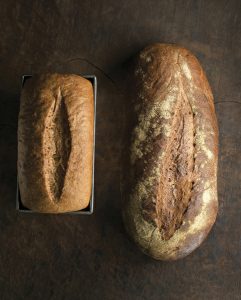 NOTE: If it is more convenient to use an overnight method, put the covered bowl of dough in the refrigerator immediately after the final stretch and fold. The next day, remove it from the refrigerator 2½ hours before baking. Shape the cold dough and proof it at room temperature until it increases in size by 1½ times, then bake as directed.