Trending
You are at:Home»Grains and Cereals»Blue corn Health Benefits and nutrition 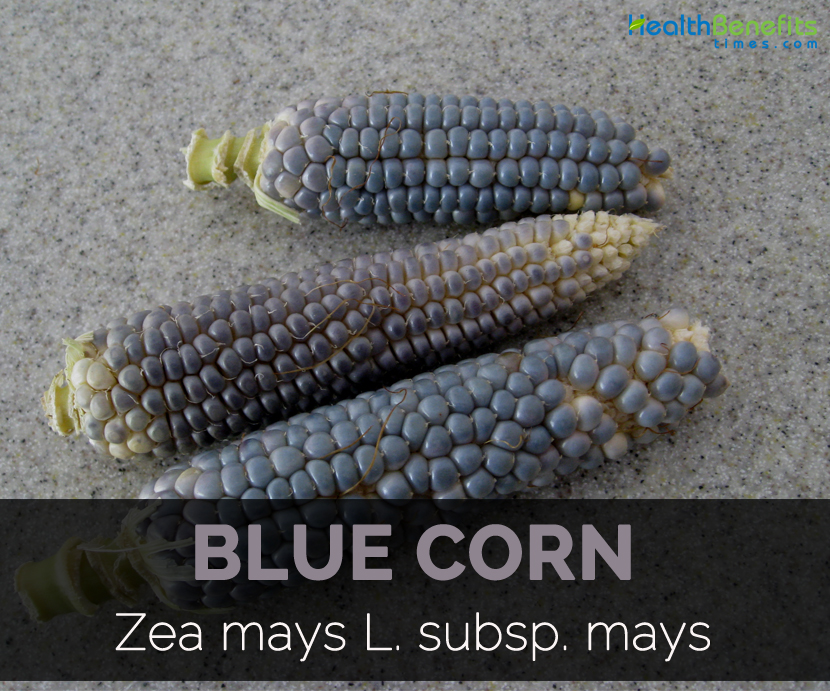 Maize is known as corn in some English speaking countries. It is a large grain tamed by indigenous people in prehistoric times in Mesoamerica. Leafy stalk forms ears containing grain which are known as kernels. The kernels are used as a starch in cooking. Six major types of maize are flint, dent, popcorn, pod, sweet and flour.

Blue corn is a flint maize variety cultivated in Southwestern United States and Mexico called tlacoyo. Originally, it was developed by Hopi and remains as a vital part of Hopi dishes such as piki bread. It is a predominant of New Mexican cuisine commonly used for making tortillas. It is an open pollinated flour corn containing soft starch used for milling specialty foods. Today, the food includes pancake mixes, tortillas, cereal and corn chips.

It is open pollinated so the growth is not regulated easily as is that of commercial hybrid of white or yellow field corn. Blue corn is a floury corn with 30% more protein in comparison to hybrid corn. Still it is used widely in Mexico and Southwest as a staple food. Due to its higher protein value, Blue corn is used as a basic ingredient in Mexican restaurants. It is regarded as one of the oldest corn varieties. In Southwestern United States, Pueblo Indian tribe used it at least as far back as 1540 when Spanish explorers discovered region. This corn type goes back to pre-Columbian era.

Blue corn is one of the most widely consumed foods in Peruvian cuisine. It is cultivated for thousands of years in Peru. Since pre-Inca times, it has been used and found in various ceramic objects of culture which dates back to 2500 years.

Appealing, if Purple Corn plant is planted outside Peru, it loses its purple color. Scientists considered that harsh environment of Peruvian Andes rising 10000 to 15000 above sea level force to counteract for survival and promote immunity capacity through evolution. It led to massive amounts of production of anthocyanins – a phytonutrient which provides deep color.

The purple corn strains originated from an ancient purple corn called Kculli. For long, it is revered by indigenous people where it is called the plant of remembrance.

Let us discuss the health benefits which Blue corn provides:

The natural plant pigment, anthocyanins provide color to blue corn or red, purple and blue vegetables. The pigments are a part of diverse and large class of antioxidants found in plants known as flavonoids. Antioxidants are essential for the body to repair and maintain cells. The antioxidant content attributes the major health benefits of fruits and vegetables. The rich content of anthocyanin found in Blue corn shows its richness in antioxidants.

Blue corn has deep blue-purple color which is a result of rich anthocyanin content with equal concentration to or higher than anthocyanin concentration of blueberries and high antioxidant capacity. Blue corn is beneficial as anti-diabetic and anti-cancer. It has anti-cancer effects by lowering expression of genes which involved in proliferation of tumor cells and suppress development of colon cancer cells in rats. The study conducted on rats with high fat diet dividing them into two groups. Test group diet was provided with purple corn pigment and they were less prone to develop early signs of obesity or diabetes in comparison to controls.

Purple corn extract is loaded with antioxidant properties that help to prevents blood vessels hardening in kidneys, a process named glomerulosclerosis that is associated with diabetes. This caused failure of kidneys if ignored or unchecked.

Blue corn has two important antioxidants named zeaxanthin and lutein which are used by eyes exclusively. These antioxidants in high level are related with lower chances of serious eye diseases developments such as macular degeneration and cataracts.

Mutagen alters DNA and promotes the chances of DNA mutation. In fact, all types of cancer are the result of DNA mutation but vast majority of DNA mutations does not cause cancer. They are associated with aging process so longevity/anti-aging lifestyles limit things which promote mutation of DNA. The factors such as alcohol, smoking and stress act as mutagens. Purple corn has both acetate fractions and water fractions that act as anti-mutagenic activity in dose dependent manner in experiments.

High ORAC superfoods such as spices exhibit antibacterial activity. The healthy gut flora of the body could be harmed by them. The lab test showed that Blue corn interacted with probiotic lactic acid bacteria such as Lactobacillus helveticus and Bifidobacterium longum. It did not harmed them.