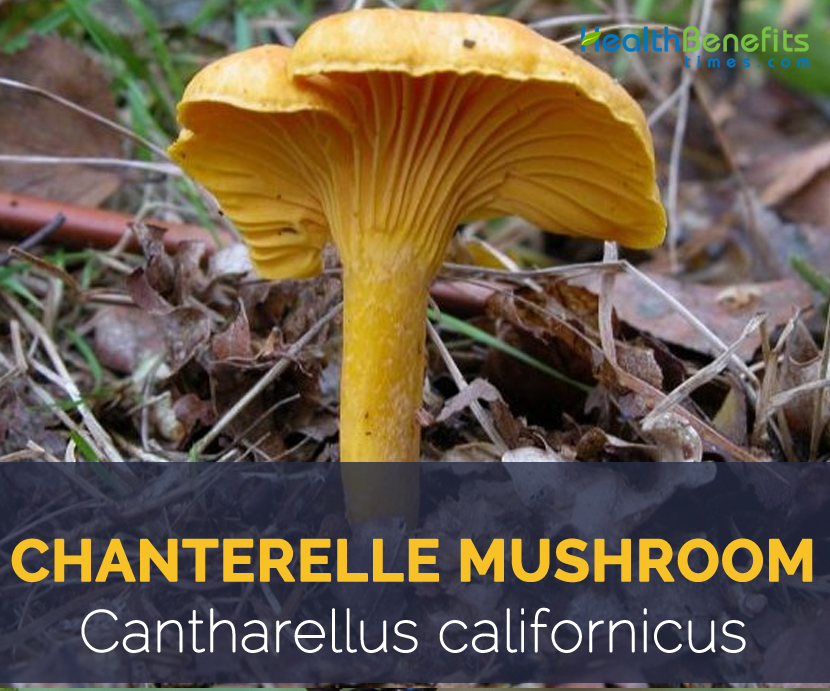 The chanterelle Cantharellus cibarius is widely regarded as among the most anticipated of edible mushrooms. It can be found singly, scattered, in groups, or occasionally clustered on the ground in woods. The generic name Cantharellus is derived from the Latin word cantharus (initially from the Greek ‘kantharos’) meaning a drinking vessel (generally with handles), a bowl or a chalice. The Greek noun kantharos was applied to (among other things) an ancient Greek clay vessel which, in turn, was so named for its resemblance to a red-tinged scarab beetle of the same name. Chanterelles can look slightly like the poisonous jack-o-lantern. Jack-O-Lanterns have sharp edged gills and pumpkin orange color growing in dense bunches. Chanterelles also look somewhat like the so-called false chanterelle. False chanterelles have close sharp edged gills, thinner stems, and often orangey brown tones. They may not be the same color all over the fruit body the way real chanterelles are. They are not fragrant. Some say false chanterelles are mildly poisonous while others regard them as just a culinary disappointment. Don’t eat them. Golden chanterelle, girolle, egg mushroom, pfifferling, gallinacci are some of the common names of chanterelle mushrooms.

Chanterelle Mushroom is actually a fungus which is found growing on the ground, usually near some sort of hardwood (oaks, conifers, etc.). They grow near trees, not alone in fields. They also don’t grow in big clumps or even on rotting wood and is supposed to have harvested for centuries from the forests of Europe, Africa, Asia, and North America. It shows a preference to grow in damp, but not swampy or marshy ground. Its flesh is thick, firm, and white, with an odor that may be fragrant like apricots (or not distinctive) and a taste that may be mild peppery (or not distinctive).The peak season to harvest chanterelle mushroom starts from June to October. They are normally about two pound in weight. The rich fruity aroma as well as pleasing texture of cooked Chanterelles is one of Nature’s culinary delights, and these edible mushrooms are not hard to spot if you look in the right kinds of places.

Chanterelle Mushroom has got a Funnel-shaped cap, of diameter up to 10 cm, has a wavy irregular margin. Color may differs from light yellow to deep egg-yolk yellow, but occasionally a fine white bloom masks the background color.

Golden Chanterelle Mushroom consists of wrinkled veins on the base of the cap which distinguish it from Hygrophoropsis aurantiaca, the False Chanterelle. Veins are usually very thick and decurrent, spreading well down the stem; they are straight close to the stem but forked and more supple towards the edge of the cap.

Stem of Cantharellus cibarius is the same color or slightly paler than the cap; frequently no more than 2cm long and merging into the cap. When growing in bunches, the stems of Chanterelles are habitually curved and rarely joined together near the base.

Chanterelles have been harvested for centuries from the forests of Europe, Asia, Africa and North America, and are among the most widely consumed ectomycorrhizal mushrooms. The best known species, Cantharellus cibarius was initially described from central France but has been reported from boreal, temperate, and tropical forests around the world.

Chanterelle Mushroom is one of Nature’s culinary delights mainly found in damp, but not swampy or marshy ground, usually near some sort of hardwood. Apart from its mild peppery taste it is full of essential nutrients, minerals and vitamins which are extremely important to deal with several long term or short term health related difficulties.

Iron is one of the essential minerals for the increased development of the brain. Chanterelle Mushroom includes about 1.87 mg of iron which is 23.38% of the daily recommended value. Since oxygen supply in the blood is assisted by iron and the brain uses around 20% of the blood oxygen, iron is directly associated to brain health and its functions. Similarly proper flow of blood in the brain helps to encourage cognitive activity and help to create new neural pathways to avoid cognitive disorders like dementia and Alzheimer’s disease, therefore proper iron rich food intake is essential for proper functioning of the brain. (1)

Copper is one of the highly essential minerals present in Chanterelle Mushroom for normal growth and development of body parts and overall health. Therefore, it is certainly essential to include this mineral in balanced form in regular diets of an individual for the proper growth. Apart from that it is also helpful in protecting of skeletal, nervous and cardiovascular systems of the body.

As we all know that Type 2 diabetes can result in some overwhelming long-term difficulties, like nerve damage, eye damage, vision loss, heart disease and kidney failure. Chanterelle Mushroom is one of the best options for getting sufficient amount of vitamin D which is exceptionally essential for dealing with type 2 Diabetes. Current research recommends that vitamin D may play a major role in reducing the risk for type 2 diabetes particularly in those who are at an increased threat for this deadly disease.

Several researches have shown improvements in insulin sensitivity, beta cell function, and whole-body inflammation with regular use of ample amount of vitamin D. One Single cup of Chanterelle Mushroom consists of 2.9 µg of vitamin D which is 19.33% of the daily recommended value, so include it in your regular diet to remain safe from Type 2 Diabetes.

Chanterelle Mushroom is one of the good sources of Vitamin B3 which in the form of niacinamide is recommended as a natural treatment for healthy skin and clearing acne when applied to the skin topically. While other people take niacin or B vitamin complex supplements to cure their symptoms.

Niacin helps to reduce skin inflammation, irritation, flare ups, redness, and more, it is also used for handling skin conditions named bullous pemphigoid and granuloma annulare. These two are inflammation-caused skin diseases that comprise burning of the skin which can be very painful and cause infection. Niacin or vitamin B3 rich food must be included in your normal diet to get rid of such skin problems.

Vitamin B5 is one of the most important vitamins which are present in Chanterelle Mushroom which is essential for reducing stress and other serious mental problems like anxiety and depression. It does this by regulating the hormones responsible for causing these mental conditions. One cup of Chanterelle Mushroom consists of 0.58 mg of vitamin B5 which is 11.60% of the daily recommended value.(2)

Adults and kids who don’t get sufficient amount of riboflavin have tendency to experience repeated headaches and even migraines. Riboflavin is one of the essential vitamins which can be obtained by regular consumption of Chanterelle Mushroom. As soon as a person gets sufficient riboflavin, the number of headaches is reduced. One scientific research done with 55 patients displayed that those who took 200-400 mg of riboflavin had considerably fewer migraines and headaches compared to those given the placebo. Regular consumption of this mushroom reduces both the frequency and intensity of the headaches.

As we all know that consuming sufficient amount of protein is essential to build and maintain healthy muscle mass, while also supporting ligaments, tendon and other body tissue. As soon as your diet is lacking in amino acids, muscle atrophy can take place when your muscle fibers are broken down to support your body’s energy needs.

Chanterelle Mushroom consists of ample minimal of protein which is required after exercise, as physical activity persistently damages muscle tissues therefore they can repair and grow back stronger. For the process to happen efficiently, you have to include some extra protein rich foods like Chanterelle Mushroom to help repair the damage. While protein alone cannot improve athletic performance, research shows that consuming protein before and after exercise helps upsurge muscle recovery, encourages muscle synthesis and helps as effective muscle ache treatment.

Numerous women are suffering from premenstrual syndrome (PMS) throughout the world. It is one of the serious problems that take place in majority of the women. Hence, manganese can be useful to reduce these monthly situations like mood swings, depression, headaches and irritability. Women who suffer from severe PMS symptoms are advised to consume manganese rich food such as Chanterelle Mushroom as it consists of 0.154 mg of manganese which is 6.70% of the daily recommended value.