Trending
You are at:Home»Herbs and Spices»Health benefits of Dong Quai (Female Ginseng) 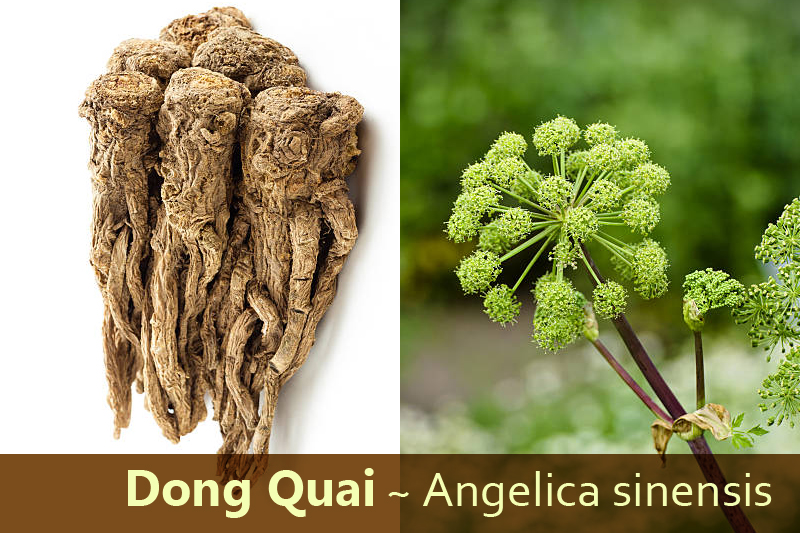 Dong Quai (Female Ginseng) scientifically known as Angelica sinensis is a well-known Chinese herb from Umbelliferae (Apiaceae) family, a botanical group which also includes carrots, parsley, dill and celery. The plant is native to China. Apart from Dong Quai it is also known as Female Ginseng, Dongquai, Chinese Angelica, Women’s Ginseng, Danggui, Danngui, Tang Kuei, Tang Kwei, Doong Quai, Qingui, Yungui, Kara Toki, Min-gui, Tan Kue Bai zhi.  It is one of the most famous herbs in traditional Chinese medicine used in the treatment of female ailments for thousands of years. Its reputation is perhaps second only to ginseng (Panax ginseng) and it is particularly noted for its ‘blood tonic’ effects on women. The root has a sweet pungent aroma that is very distinctive and it is often used in cooking.

Dong Quai has been called “Female Ginseng” because it is commonly used for health conditions in women. The plant has been used for menstrual cramps, anemia associated with menstruation, pregnancy, premenstrual syndrome (PMS), pelvic pain, recovery from childbirth or illness, and fatigue or low energy. Dong Quai is used in both men and women for heart conditions, high blood pressure, inflammation, headache, infections, and nerve pain.

Dong quai also known as Chinese angelica is a fragrant, perennial herb growing about 0.4–1 m. tall. It thrives at very high altitudes in the cold and damp conditions offered by the mountains of Japan, China and Korea. Dong quai is an aromatic perennial related to celery. The plant requires a deep moist fertile soil for better growth.

Plant has cylindric, branched, rootlets many, succulent, strongly aromatic. Stem are glabrous and purplish, with light, linear striations. Lower leaves are large and tri-pinnate, each further divided into two or three leaflets. The smaller upper leaves are pinnate, which means that the leaflets are arranged in opposite rows along the leaf stalk. The leaves of female ginseng resemble those of carrot, celery, or parsley and emerge from dilated sheaths surrounding a bluish-colored stem that is branched at the top. Flowers are honey-scented, greenish-white grow in large compound flat-topped clusters. Fruits are ellipsoid or sub orbicular, 4–6 × 3–4 mm; dorsal ribs filiform, prominent, lateral ribs broadly thin-winged, wings as wide as or wider than the body; vittae 1 in each furrow, 2 or absent on commissure.

Its thick brown branched roots are used to make medicine. Once the plant has reached maturity after 3 years, its root gets harvested to produce medicines in the form of powders, capsules or tablets. 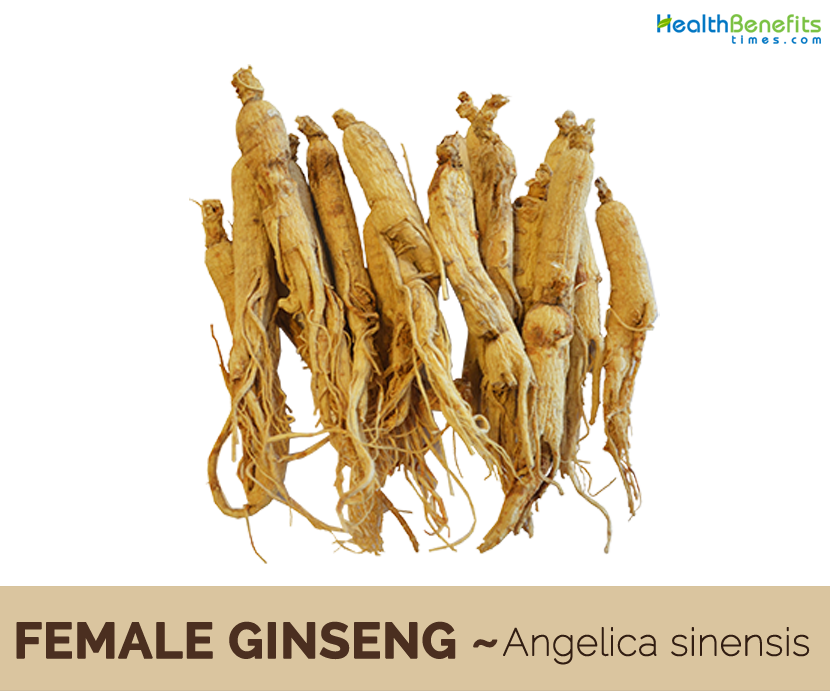 Dong Quai has been used for thousands of years in traditional Chinese, Korean, and Japanese medicine and continues to be popular in China and elsewhere. It is used primarily for health issues in women and has been termed “female ginseng.” It reported to be a blood strengthener and has been used for cardiovascular conditions, inflammation, headache, infections, and nerve pain.

Dong Quai (Angelica sinensis) is also known as Chinese Angelica and is mostly known for its uses in treating women’s problems including lack of sexual desire, the symptoms of menopause, cramps and PMS. For this reason it is also commonly known as “female ginseng”. It aids in increasing the effects of hormones in both men and women and is widely used as an aphrodisiac. Listed below are few of the health benefits of Female ginseng

Due to its invigorating and arousing properties, Dong quai has been related with reducing depression and lessening the effects on our system. There is a relationship between dopamine and serotonin releases in our body from certain active components of dong quai, which can explain this wonderfully uplifting quality of this supplement!(1)

Dong quai certainly helps men and women and are used as an aphrodisiac. Research has shown that dong quai in several forms can increase male and female libido levels, as well as their fertility likelihood. Instead of paying thousands of dollars or spending years trying to conceive, adding some powerful dong quai to your diet, it can help boost your chances of conception, and increase your interest in the act itself!(2)

Dong quai is called female ginseng because of its effects on the symptoms of premenstrual syndrome and menopause. Cramping, mood swings, and general discomfort of menstruation is relieved by the antispasmodic properties of dong quai, while also helping to reload the blood after your menstruation period so that you don’t feel weak or tired for days afterwards. For women who have chosen to get off birth control pills, dong quai can actually help to naturally regulate and ease your cycle.(3)

Antioxidant compounds found in female ginseng plays an important role in keeping the skin young and healthy in appearance. Dong quai more specifically works as an anti-inflammatory and antibacterial substance for skin conditions like alopecia, psoriasis, and eczema, lessening the discomfort and appearance of these skin illnesses quickly.(4)

One of the most common places for toxins and potentially harmful substances to appear in the body is in the blood. It can be difficult to cleanse the blood, but the high levels of nutrients and vitamins found in female ginseng, such as folic acid, biotin, and vitamin B12, actually work to clear out the blood and reduce toxicity throughout the body.(5)

Female ginseng (Dong quai) consists of significant levels of iron that can significantly boost circulation throughout the body. Iron is actually a key component of red blood cells, and without it, people often suffer from anemia, characterized by headaches, muscle weakness, unexplained fatigue, and cognitive disorders. By increasing circulation throughout the body, you can boost energy levels and promote healing as extremities in the body become oxygenated and energized with nutrients.(6)

For thousands of years, dong quai has mainly been turned to by the fairer sex, as it has a very unique ability to regulate estrogen levels within the body. Whether you’re too high or too low in the estrogen department, dong quai extracts and supplements can get your system back on track, effectively protecting feminine health by helping to regulate periods.(7)

Dong quai has the ability to improve mood and lessen anxiety and stress. For women undergoing the hormonal roller coaster of menopause or menstruation, as well as men suffering from anxiety and stress, dong quai can help to control hormones to reduce mood swings and ease our minds.(8)

Dong Quai can help with heart health in a number of ways. Firstly, it has been directly connected with lowered blood pressure in research studies, and it can also treat abnormal heart rhythms due to its antispasmodic capabilities. Finally, dong quai can reduce excess platelet build-up in the arteries and blood vessels, which is one of the main causes of atherosclerosis, strokes, and heart attacks.(9)

As mentioned earlier, dong quai is loaded with powerful chemical compounds that have a wide range of effects on our body, including eliminating free radicals before they can damage our organ systems and cause chronic diseases. This means that dong quai has the potential to reduce our chances of everything from heart disease to cancer due to these important antioxidant compounds.(10)

Other Facts of Dong Quai

How to Use Female Ginseng

In China, dong quai is often distributed in the form of an injection but in the west, it is readily available in safer forms. You can find it at health stores or online in liquid extract, capsule powdered or dried form. The dried herb can be soaked in wine or boiled before being consumed.

Children should not take dong quai because of the lack of safety research. It is believed to be safe for healthy adults but the lack of research means there is no precise recommended dose. One study on menopausal women found no ill effects when dong quai was taken in 500 mg capsules 6 times a day.