Trending
You are at:Home»Foods»Focaccia Nutrition and facts 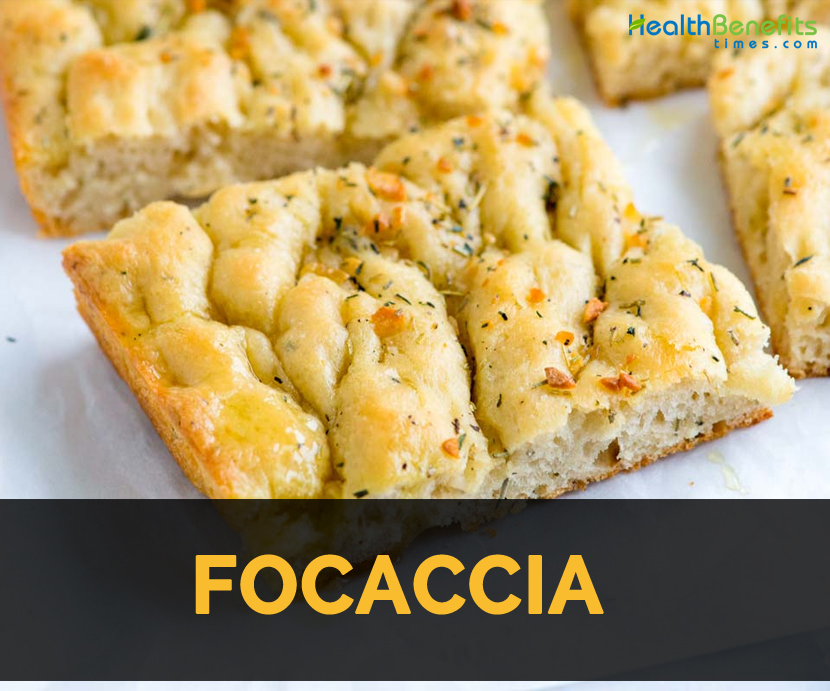 It is a flat oven baked Italian bread which has similar style or texture to pizza doughs. Focaccia is common of Liguria and well known throughout Italy and seasoned usually with salt and olive oil. It is flavored with vegetables, herbs and cheese. It is made from simple ingredients such as water, yeast, flour, salt and olive oil seasoned with herbs.

It is used as side dish to sandwich bread or meals. Being a typical bakery product of various Italian regions, it has variants that depend on productive area. Various focaccia types have similar productive steps such as mixing, kneading, leavening, flattening, proofing and baking. In the past, only sourdough based prolonged productive process was performed but today fresh compress baker’s yeast is used in major bakeries for preparing focaccia. Durum wheat re-milled semolina and extra virgin olive oil used as a vital ingredient in various types of focaccia.

The term focaccia is derived from Latin word hearth or focus originated from how this bread was baked on hearth stones. Still today, bakers bake Focaccia in hearth ovens some are wood-fired. Today, it is widely spread over the country and each region seems to have its own focaccia recipe. Focaccia Pugliese and Fociaccia Ligure are the most common or wide-spread ones. Focaccia Genovese is introduced from city of Genoa which has only salt and olive oil on top which adds unique taste to bread dough and makes it an ancient food and most appreciated snacks. Focaccia Pugliese is prepared with vegetables on top such as olives and fresh tomatoes, onions and finely sliced potatoes.

This bread is popular in Italy and spread around world wherever Italian traders and settlers have formed communities. Relatively bread is flat and plain inside but is topped with herbs and olive oil occasionally topped with sliced olives. Many varieties of Focaccia exist but new varieties are created in 21st century due to versatility of basic recipe.

Historians believe that Focaccia originated with Etruscans of North Central Italy preliminary to Roman Empire forming or at the beginning of first millennium BC in Ancient Greece. Though this bread has been made in Middle East extending to Persia for this long and so well identifying specific culture which is responsible for first focaccia loaves. Focaccia is different in as the loaf rise slightly and is not traditional unleavened bread and focaccia recipe is unknown in the Middle East and history is made in Turkey, Italy, Greece, Spain and France.

The term focaccia is derived from Roman words “panis focacius”. Panis means bread and Focacius is the center or fireplace in Latin word. In Roman times, Focaccia was cooked in ashes of fire rather on the tray above fire.

They mixed up a simple recipe of olive oil, rough flour, water, salt and yeast and seasoned with herbs then baked in fociacus. Focaccia was used in Roman times as dipping bread usually parted by hand and dipped into salty soups prepared from vinegar, water and olive oil. It does not seem to be appetizing in this present times but it provide nourishment and was a cheap or filling meal for people performing long hours of physical labor.

In France, Fouaisse or foisse hat made in Burgundy are regarded as significant bread by momentous part of population and in bakeries it is one of the popular bread sold. In 20th century, Italian immigrants brought recipes for pizza, grissini, bruschetta and focaccia to United States. Today, Focaccia is not only the preserve of Italian communities but could be found in all supermarkets and bakeries. Focaccia bread is tasty sandwich bread with various seasonings and served with ham fillings and cheese.

How to make Focaccia?