Trending
You are at:Home»Foods»The 11 Healthiest Regional Cuisines in the World 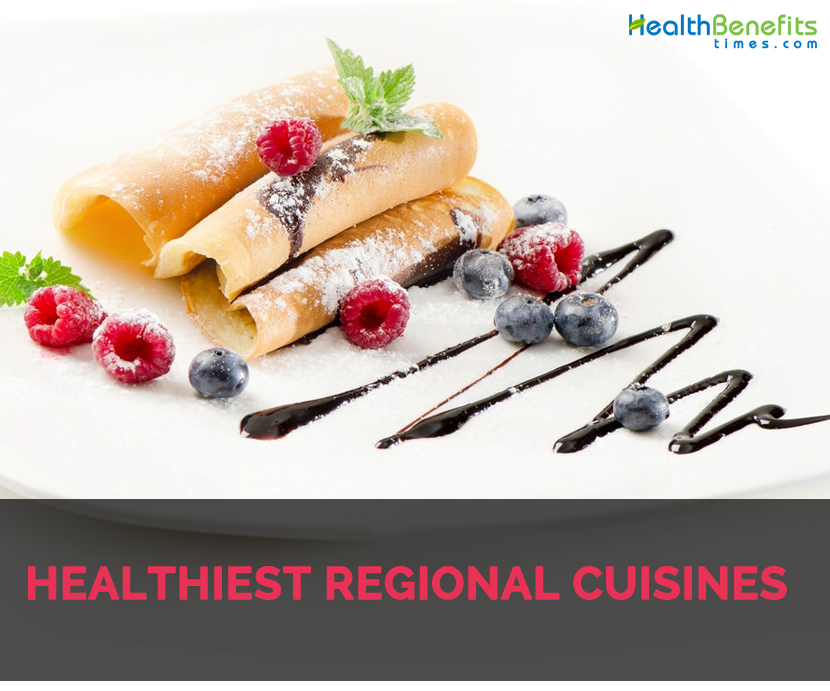 We now live in a global food market. Imagine if you no longer had access to lemons or coconut oil because they weren’t available in your local economy. Think about coffee and tea or the spices you use to flavor your food. When it comes to our food today, much of what we consume comes from this global interaction. Merriam Webster defines globalization as “the development of an increasingly integrated global economy.” We have gained so much from the many food traditions throughout the world that we don’t even think about. At the same time, we are at risk of losing our deep connections to our ancestors’ diets. These foods provided sustenance and kept those people healthy for thousands of years. Local cultures and food traditions are disappearing, as multinational food corporations are increasingly providing more and more food without much thought to the regional foods of the world.

“Diets evolve over time, being influenced by many factors and complex interactions,” according to the website of the World Health Organization.6 “Income, prices, individual preferences and beliefs, cultural traditions, as well as geographical, environmental, social, and economic factors all interact in a complex manner to shape dietary consumption patterns.”

Many regions of the world are less reliant on processed, convenient foods and, instead, have amazing regional foods and customs that keep people healthy. Here are a few examples.

This large and diverse continent is home to root vegetables, leafy greens, beans, and wild meats and fish. Okra and watermelon are native to Africa. The main grains found in Africa are couscous, sorghum, millet, and rice. Researchers have found that North Africans may have been making yogurt around 7,000 years ago.7 Pottery shards were discovered with traces of fat from a fermented dairy product, and scientists believe this method made it more digestible. Traditional Central and Western African meals are often based on hearty and aromatic vegetable soups and stews served over tubers or grains. Fufu is a dish made from starchy foods like cassava or yams, usually served with grilled meat. Eastern Africa serves up more whole grains and vegetables, especially kale, cabbage, and maize (cornmeal). Ethiopia and Somalia feature flat breads like injera (made out of teff or sorghum) and spicy beans like lentils, fava beans, and chickpeas.

Traditionally, the diets in these island nations took their roots from the English diet, with stewed meats, puddings, and pies. Dinners typically consisted of lamb, beef, or chicken with potatoes or root vegetables. Seafood is certainly abundant in coastal areas. The indigenous Aborigine in Australia enjoyed meat from kangaroo, crocodiles, and turtles, along with shellfish and native fruits like wild peach or riberry (similar to cranberry). The Maori in New Zealand took advantage of the many wild plants and roots like kumara (sweet potato) and taro. The world knows these areas for Marmite and Vegemite, food pastes made from yeast extract and used to spread on toast and sandwiches. With an intense flavor, these spreads are rich sources of B vitamins, niacin, and folic acid.

Many local fruits and vegetables offer tons of nutrients and energy to the Caribbean lifestyle. Guava is a small, oval-shaped fruit with a rough outer skin but with a sweet and sour taste inside that’s high in fiber, potassium, and vitamin C. Breadfruit can be boiled or mashed much like a potato, and it’s an excellent source of fiber and potassium. Beans are another staple in the Caribbean diet, including lentils, chickpeas, kidney beans, black-eyed peas, and split peas. Callaloo, the national dish of Trinidad and Tobago, consists of a stew made with green leafy vegetables, usually some kind of spinach variety.

India is famous for its aromatic cuisine. The country has some of the lowest rates of Alzheimer’s disease in the world, thanks in part to some of its healthy spices. Curcumin, responsible for the yellow color found in curry spice, continues to be studied for its health benefits that include cancer prevention and anti-inflammatory properties that help ward off the onset of Alzheimer’s. Other spices, like ginger, chilies, and cardamom, are also great for you. Indian dal is made with lentils and veggies, is full of magnesium, and can even help stabilize blood sugar. Indian surveys show that about 40% of the population is vegetarian, but demand for meat seems to be rising in recent years.8

Citizens of Sweden, Denmark, and Norway boast some of the lowest obesity rates in Europe, perhaps because their diet is full of cold-climate veggies like kale, cabbage, and cauliflower. Their bread is made with rye grain, which is easier to digest than wheat and has more soluble fiber, helping to lower cholesterol and glycemic load. A small, randomized study from 2010 tested the health of the Nordic diet using local foods like herring, rapeseed oil, and berries on people with metabolic syndrome (a precursor to diabetes). Researchers found that those eating the healthy Nordic foods had significant improvements in their bad cholesterol/good cholesterol ratio and also in a marker for inflammation, which could result in a 20% to 40% decrease in likelihood of developing type 2 diabetes.9 While scientists felt confident the diet had health benefits, they also recognized it might be hard to replicate the diet outside of Nordic countries. It’s just another testament to the power of local, whole foods.

Another region of the world known for its spices and healthy dishes is the Middle East, including countries like Turkey, Israel, Iran, Iraq, Lebanon, Palestine, Jordan, and more. Some of the most common ingredients here are olive oil, chickpeas, sesame seeds, dates, and herbs like mint and parsley. This region is known for hummus and other healthy dips served with plenty of vegetables. Sumac, a dark red spice made from wild sumac berries, offers a tart flavor used as a rub on meats and kebabs, as well as in marinades, dips, and stews. Traditionally, the spice had medicinal purposes, too, helping promote good digestion, easing stomach pains, and even reducing fevers. Sumac berries contain antioxidants and antimicrobial properties. The spice is used in a spice blend called za’atar, which also includes wild oregano, thyme, toasted sesame seeds, and salt. This health food dates back to the 12th century when the Spanish Jewish philosopher Maimonides is said to have used it with his patients to treat many ailments.10

The Filipino diet includes rice with almost every meal, along with lots of fresh seafood and local vegetables, like water spinach, eggplant, and bitter melon. People tend to eat three meals a day, along with a morning and afternoon snack. The food prep is usually quite simple—grilled, steamed, or raw. Fish and veggies typically receive a marinade of vinegar or lime juice. More recently, American-style fast foods like hamburgers and pizza have become more popular, creating a similar rise in overweight and obese people, as in the U.S.11

Japan is another place where obesity rates are low, and people who live in the Blue Zone region of Okinawa live to be 100 or more. Food prep is usually light steams and quick stir-fries with fresh vegetables and fish. Of course, sushi is also easy to digest and can be high in heart-healthy fish oil. Some of the staple foods that contribute to that health are calcium-rich greens like bok choy, shiitake mushrooms, sea vegetables, and antioxidant-rich green tea. Miso, tempeh, natto, and other fermented soy products are easy to digest and offer increased nutrition as rich sources of iron, magnesium, and zinc.

Another diverse continent, South America makes use of fresh vegetables, beans, and fruit. A high-protein seed that cooks up like a grain, quinoa, is a superfood that grows abundantly here. Some areas like Brazil and Argentina are known for steaks and meat but also have healthier dishes like ceviche—a mixture of raw seafood, citrus juice, and tomato. And the most basic South American meal of rice and beans with fresh cilantro and chili peppers is another healthy dish.

Fresh herbs, vegetables, and fish prevail in this area. Using more water and broth for cooking is an easy healthy habit to take from Southeast Asian kitchens. Flavorings like cilantro, mint, ginger, tamarind, and chilies are all great for digestion and help fight inflammation in the body. In Vietnam, you find pho, an aromatic noodle soup full of antioxidant-rich spices. Researchers at Thailand’s Kasetsart University have studied the immune-boosting qualities of Tom Yum Goong, a soup made with shrimp, mushroom, coriander, lemongrass, ginger, and other herbs and spices. Incidences of digestive tract cancers are lower in Thailand than anywhere else in the world.12

Spain is synonymous with tapas—small plates of veggies, fish, or meat. The rest of the world could certainly benefit from this ritual of eating smaller portions during a long, leisurely meal. Spanish food features fresh seafood, vegetables, and olive oil, a darling of the Mediterranean diet. Particularly healthy dishes like gazpacho are full of antioxidants, like lycopene, known for its cancer-fighting properties. Paella is another great meal with seafood, rice, veggies, and spices.

Wherever you are in the world, it’s important to look at the whole picture and find balance with both primary and secondary foods. Healthy ingredients are great, but many people who eat relatively healthy still don’t have the energy and zest for life of people who feel truly fulfilled in their lives. It’s not just the food but also the lifestyle that contributes to the health of families, the environment, and ultimately the planet.