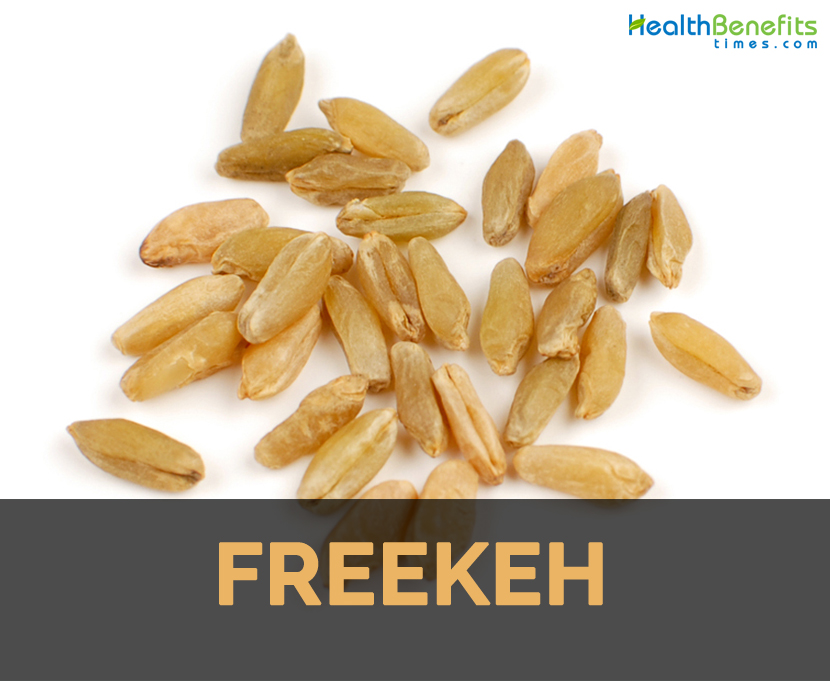 Also pronounced as free-kah, Freekeh is wheat that have been harvested while green or young. It is roasted on open fire and then chaff and straw are rubbed and burned. As the grain inside is young and moist to burn, only remains is firm and slightly chewy grain having distinct flavor of nutty, earthy and slightly smoky. It is a predominant in Middle Eastern diets for centuries but started recently got popularity stateside. It is regarded as ancient dish which is derived from North African and Levantine cuisines which remains popular in various countries of Eastern Mediterranean Basin.

While the grains are yellow and seeds are soft, wheat is harvested and then piled and also sundried. The piles are set on fire so that the straw and chaff only burn. Roasted wheat is threshed and sun dried to get uniform flavor, color and texture. The rubbing or threshing process of grains provides the name farīk rubbed. The seeds are finally broken into smaller pieces that feature green bulgur.

It is mentioned in Bible and discovered by accident when soldiers of Eastern Mediterranean ruin crop by setting fire to wheat fields. The grains have similar texture of Bulgar wheat and have nutty, rich and smoky flavor. It could be added to stews, soups, pilafs and salads. It could be prepared like barley or rice and also used as a stuffing.

In an early thirteenth century, Freekeh is mentioned as farīkiyya in Baghdad cook book. This recipe includes the meat to be fried in oil and braised with salt, water and cinnamon bark. Then young wheat is cooked with stirred dried coriander. The meal is then served with cinnamon, cumin and fresh lamb tail fat.

Some health benefits of Freekeh are:

Freekeh has high content of protein and also fiber which provides the feeling of satiety when consumed with meal. In comparison to brown rice, it contains three times more fiber. It supports in lower weight by providing the feeling of full. The studies shows that increase in intake of fiber consumption assist in losing weight. Study focused on the change in weight over the period of 12 months on 240 adults having metabolic syndrome and the results showed that great changes in weight was found in the group consuming diet rich in fiber.

Freekeh has carotenoids such as zeaxanthin and lutein that acts as antioxidants which prevents macular degeneration associated with age.

Evidence shows that lutein has positive affect ocular development throughout life starting in utero and reduces the chances of developing age associated eye problems. These carotenoids could be found in fruits, vegetables, breast milk, egg yolks and freekeh.

Freekeh has fiber in it which stimulates healthy bowel movements. Both insoluble fiber and soluble fiber are helpful. Insoluble fiber which assists digestive health as it adds bulk to stool. It provides relief from constipation by assisting food to pass through digestive system efficiently and easily.

Freekeh has prebiotics which assist beneficial live bacteria which could be found in yogurt, kombucha, miso, kefir and raw sauerkraut. It fuels intestinal bacteria and probiotics which are found in plants. Studies shows that prebiotics assist people with IBS such as ulcerative colitis. It assists digestive ailments such as symptoms of IBS, diarrhea, leaky gut syndrome, inflammatory bowel disease and Candida virus.

Each serving of Freekeh provides 2.27 grams of glutamic acid that is highest amino amount found in amino acid profile. It is well known to bodybuilders and athletes as it synthesize glutamine and are able to build strength and endurance. It is due to excitatory neurotransmitter which resides in central nervous system which is common neurotransmitter in brain and spinal cord area.