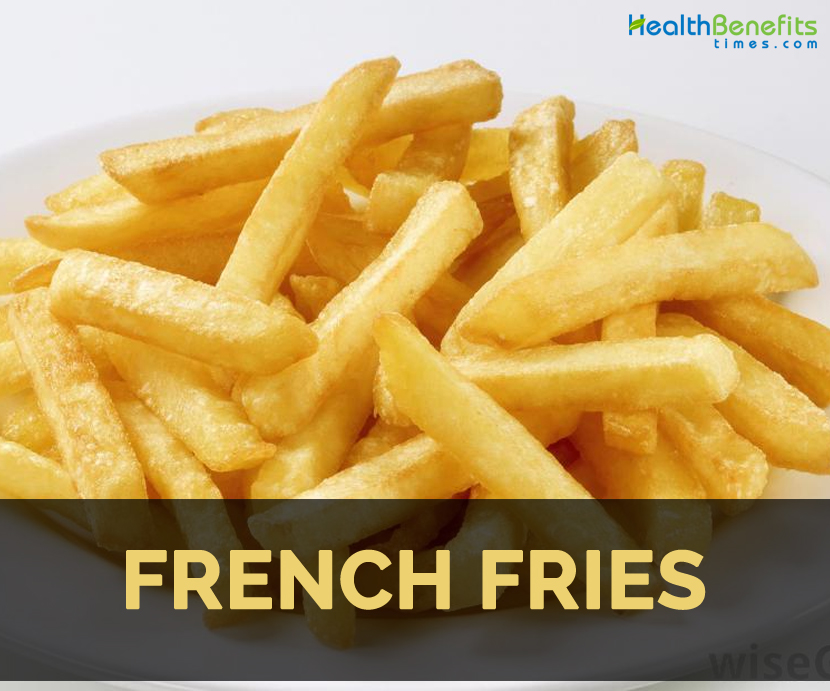 French fries is an elongated pieces of potato which have been deep fried. It is soft or crispy which is served hot either as a snack, dinner or lunch. It could be found in any place on the menus. It is mostly paired with ketchup or used as toppings or condiments such as mayonnaise, vinegar and others. It could be served as a topping for chili cheese fries or poutine dishes. Besides potatoes, sweet potatoes could also be used for making French fries. The potatoes are cut into thin slices which is then put in the boiling fat and fried on both sides till it becomes light golden brown in color and is drained. In South Africa, Australia, New Zealand, Ireland and United Kingdom, it is also called shoestring fries in order to differentiate from thicker cut chips.

There is no exact history of French fries. Spanish, French and Belgian asserted that they are an exclusive fries inventor. Belgian called it French fries. French assert that it was firstly sold by street vendors on Pont Neuf bridge in 1789. In 1802, the potatoes were fried in French style by Jefferson at White House dinner.

French fries are commonly known from the children to elders. It could easily be found in cafes, bistros and fast food restaurants. It will be more delicious if consumed with ketchup, vinegar and salt. It has few health benefits along with disadvantages such as clogged arteries, health issues and obesity. It is loaded with various amounts of nutrients and fat.

Vitamin K lowers the bleeding in liver, jaundice and poor absorption of nutrients. The deficiency of Vitamin K leads to colitis, Crohn’s disease, sprue and obstructions. (1)

Vitamin B6 has a vital role to strengthen immune system of the body as well as its functions. It supports the body to counteract various infections that could victimize body in the deficiency of this vitamin. (2)

Phosphorus is vital to facilitate digestion in the body. Niacin and riboflavin is required for the metabolism of energy to emotional response and neurological systems. It helps to treat diarrhea, constipation, indigestion and regulates healthy bowel movements. It raises the digestive health. (3)

High intake of niacin helps to lower the bad cholesterol level and increase the level of good cholesterol. It prevents the conditions such as atherosclerosis and thickening of artery walls. (4)

Copper has anti-inflammatory properties which lowers the arthritis symptoms. It is believed that copper is an aid for arthritis which helps to strengthen muscular system. The water should be stored in a copper container and consumed in the morning which is helpful for the arthritis patients. (5)

The deficiency of potassium in blood is the reason for muscle cramps which is also called hypokalemia. The foods rich in potassium help to prevent muscle cramps. (6)

Iron helps to increase the brain development. It aids the supply of oxygen as the brain requires about 20% of oxygen. The blood flows in brain enhances the cognitive activity and assist to form new neural pathways. It also prevents the cognitive ailments such as Alzheimer’s disease and dementia. (7)

Pantothenic acid helps to lower stress and mental problems such as depression and anxiety. It also promotes the fitness of mind. It organize hormones which are the cause for these conditions. (8)

Manganese has antioxidant properties which help to eliminate free radicals from the body. Free radicals damage the cells and cause cancer as well as other diseases. The foods rich in manganese helps to prevent these diseases. (9)

Sugar is considered as the energy source which is oxidized by Vitamin B1 into the usable energy. It is also the part of pyruvate dehydrogenase system that assists in the sugar oxidation. Vitamin B1 is essential for the enzyme functions as well as normal functions. (10)

French fries are cut potatoes which are deeply fried. It could be prepared in the home which might differ in the way of making but is regarded to be healthy. French fries contain dietary fiber which prevents the risk of rise in cholesterol level which increases the chances of heart problems. It is the fast food which is well known to young as well as elder people. It could be found in any restaurants, cafe and bistros. Besides health benefits, it is rich in starch which could lead to diabetes. One should consume French fries in limited amounts only.