Trending
You are at:Home»Dairy»Greek Yogurt 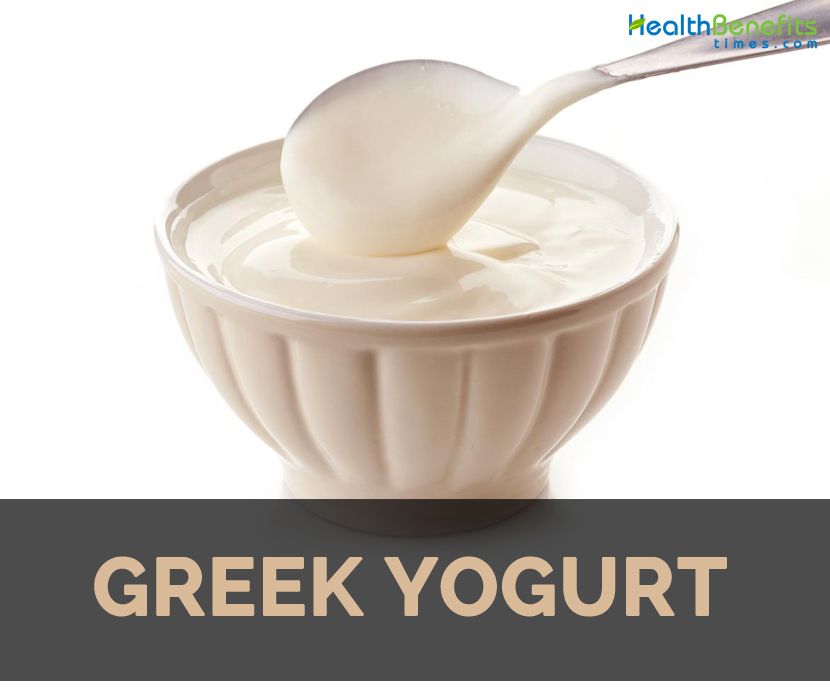 Yogurt is a fermented milk product which offers digested lactose and viable bacterial strains such as Lactobacillus bulgaricus and Streptococcus thermophiles. It is a great source of various essential nutrients such as potassium, calcium, protein, vitamin B12 and B2 and phosphorus. Greek yogurt is a strained yogurt which is extensively strained to discard whey and lactose resulting thicker textured yogurt by preserving distinctive sour taste of yogurt. Similar to other yogurt, Greek yogurt is made from milk enriched by boiling off some water content or adding powdered milk and extra butterfat. In North America and Europe, it is made with fat free or low fat yogurt. Generally, it is referred as Greek style yogurt in Britain and is widely consumed in Eastern Mediterranean, Levantine, Central Asian, Middle Eastern and South Asian cuisines. The straining process eliminates excess whey and non-fat varieties are much richer, thicker and creamier in comparison to yogurt which is not strained. Greek style yogurt in US uses more thickeners such as starches, pectin, guar gum, starches, locust bean gum are used instead of straining. In US and Western Europe, the popularity of strained yogurt has increased in comparison to unstrained yogurt. The straining process discards some lactose and it has lower sugar than unstrained yogurt. Due to this, Greek yogurt is higher in protein with low carbohydrates and sugar. Greek yogurt got originated in parts of Europe about hundreds of years ago. The goat and cow milk were fermented first to prolong its shelf life.
Greek yogurt Image Gallery

Research has been carried out on mice feeding Lactobacillus (probiotic bacteria found in live cultures yogurt). The bacteria affected mood and provided direct link between mental health and health of gut microbiome. On the basis of this finding, researchers tend to confirm with depression patients. The same mechanisms and biological substances Lactobacillus used to affect mood in mice is observed in humans also suggesting that the effect is same. (1)

Besides exercise, one should have healthy diet to provide influence over weight. It contains twice protein and less sugar that makes one satisfied for longer time period. The consumption of 200 calories from protein, the body gets only 160 calories after processing. So consumption of high protein is effective for losing weight.

Fungus candida is responsible for causing yeast infections which lives in vaginal tracts of women naturally. Usually it occurs when the good bacteria reside in our gut and even vagina becomes wiped out. Greek yogurt is loaded with probiotic bacteria i.e. essential for natural flora’s wellbeing. It provides limiting effect on yeast so these infections could be prevented.

Greek yogurt also promotes digestive bacteria which have a vital role in assisting digestion and results waste. Digestive problems occur when these cultures are insufficient. The poor probiotic cultures causes’ malnutrition, as nutrients would be hard to get absorbed and suffers frequent diarrhea. It is necessary to maintain cultures well stocked and also good shape as little bacteria are beneficial for health.

High intake of sodium is the main cause for high blood pressure which occurs with concurrent deficiency of other minerals. Greek yogurt offers the minerals regulating blood pressure such as calcium, magnesium and potassium. It balance electrolyte concentrations or relaxes blood vessels.

Greek yogurt has essential bone building nutrients such as magnesium, calcium, Vitamin D and phosphorus. The nutrients are essential as people ages especially to woman. Osteoporosis is associated with deficiency of these vital nutrients.

Greek yogurt is useful for lactose intolerance due to its unique way probiotic culture digest it. The straining process leads to less sugar making it digestible easily to majority of people. It is helpful for those recovering from surgery. Being digestive friendly, it assists intestines with essential good bacteria.

For the formation of blood, it requires more than iron. Greek yogurt requires more co-factors such as Vitamin B12. Vegetarians find it difficult to get adequate amount of Vitamin B12 from their diet. The consumption of yogurt helps to settle these deficiencies.

Protein is must for those trying to gain muscle mass. Meat is a great source of protein but besides it, Greek yogurt is also a perfect choice to obtain protein. It could be consumed any time even at workout period, during day and before bed.  Yogurt incorporates both casein and whey protein which supplies combo of fast and slow digesting amino nutrition.

Calcium is beneficial for teeth as well as bones. Probiotics could keep healthier gums. An intake of Greek yogurt helps to lower the cancer sores development and the present cancer sores to heal much faster. Sugar in low content also enhances tooth decay.

Gut has a nerve which is known as Vagus which directly relay signals from gut to brain and vice versa. It clarifies why anxiety results in nervous stomach and how yogurt promotes wellbeing. By lowering the chances of intestinal disorders and buffering effect of cortisol, the nerve transmits brain that calm is achieved. In response, brain creates more serotonin and calms itself. Thus, Greek yogurt is beneficial for gut.

The shelf life of Greek yogurt depends on the way it is stored. All dairy products should be kept in the refrigerator immediately to keep fresh for longer time period. Store the yogurt container for long time (a month or two) by freezing them. Seal the container tightly to keep it fresh. The perishable goods when kept at room temperature for more than 2 hours is prone to growth of harmful bacteria.