Trending
You are at:Home»Fruits»Health benefits of Haskap Berry 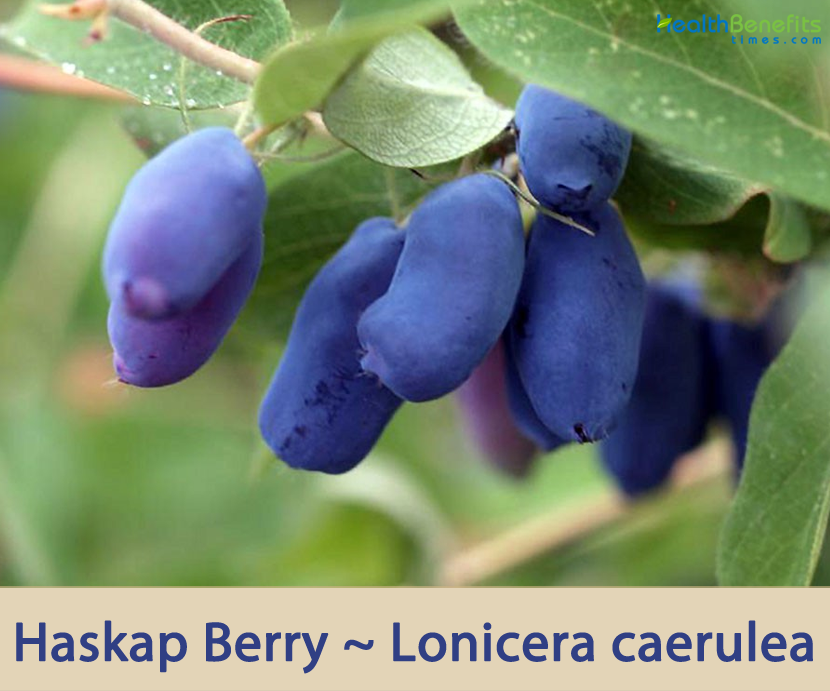 The Japanese meaning for Haskap is “little presents at the end of the branch”. They are as special as they are delicious. Genus name honors Adam Lonitzer (1528-1586), German botanist, the author of an herbal (Kreuterbuch) many times reprinted between 1557 and 1783. The specific epithet caerulea means “dark blue” in reference to fruit color. Haskap Berries are power-packed with nutritional ingredients and they taste great! They are an excellent source of antioxidants, Vitamin C, Vitamin A, Fiber and Potassium. Also known as Blue Honeysuckle in Japan it is said to be “the fruit of longevity” and “fruit of vision”.

Haskap Berry is a fast-growing, non-climbing, circumpolar, multi-branched deciduous shrub that normally grows about 1.5–2 m (4 ft. 11 in – 6 ft. 7 in) tall. The plant is found growing in or near wetlands of boreal forests in heavy peat soils. However, it also can be found in high-calcium soils, in mountains, and along the coasts. The plant is tolerant of most soils. Well-drained, organic matter rich soil is also ideal. It is semi-tolerant of wet soil conditions, but not clay. This shrub in general is unlike many of its honeysuckle relatives in that it produces an edible, tasty, blueberry-like fruit.

The flowers are pale yellowish-white, 12–16 mm long, with five equal lobes; they are produced in pairs on the shoots. Flowers start to bloom in late spring to early summer (April-June).

Fertile flowers are followed by an edible, deep blue berry with reddish-purple insides. They are somewhat oval-teardrop to almost-globose shape weighing 1.3 to 2.2 grams (0.046 to 0.078 oz.), and about 1 cm (0.39 in) in diameter. Their deep blue skin and crimson flesh give haskap 3 times the antioxidants and 4 times the anthocyanins of blueberries.

Haskap Berry originates from Western Europe, Siberia and Northern Asia and has been used in traditional medicine in Japan, Russia and China. It is thought to originate from the frozen wilderness of Sibera and carried by birds to the northern Japanese island of Hokkaido. The indigenous people of the island named the berry haskap, meaning ‘many fruits on branches’. 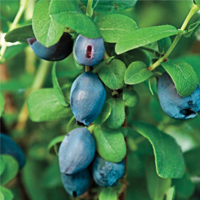 It is about 4 to 5 feet tall and has firm skinned fruit that are fairly large. The plant is resistant to powdery mildew and is often used in commercial production because the berries have a dry picking scar and are quite firm. 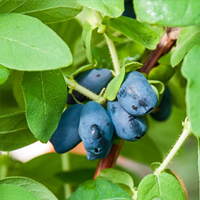 It is 4 feet tall and is touted to be one of the best tasting cultivars. It produces large fruit and is well-suited for the home garden. 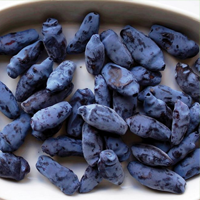 The plant is 5 to 6 feet tall and produces fruit that is smaller and tangier than most other cultivars, and is a very heavy producer. Unfortunately, it is somewhat susceptible to powdery mildew. 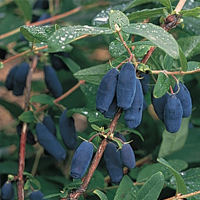 The plant is 5 feet tall and is a popular Russian cultivar and produces a heavy crop of sweet-tart dark blue berries. 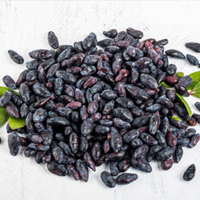 It is 5-6 feet tall and is another Russian cultivar and produces large, abundant dark blue fruit. 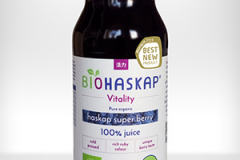 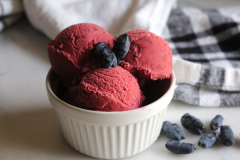 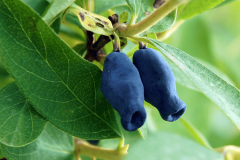 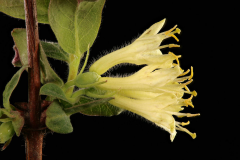 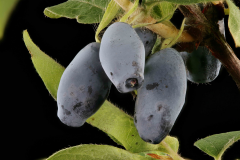 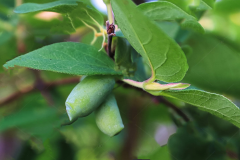 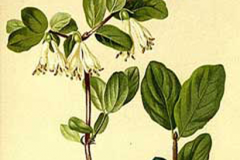 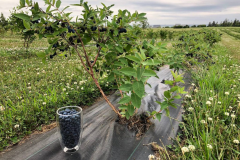 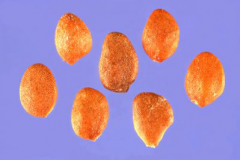 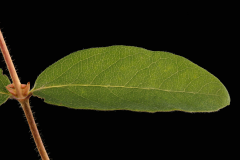 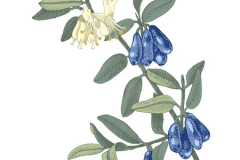 Anthocyanins are naturally occurring plant pigments that give fruit and vegetables their deep purple, blue and red colors. Haskap berries have one of the highest recorded anthocyanin values of any berry. Anthocyanins are associated with antioxidant, anti-inflammatory, neuro-protective and cardio-protective properties. It is these properties that are associated with their health-promoting benefits. Listed below are some of the popular health benefits of using Haskap Berries

Inflammation is the primary cause for chronic diseases, and these berries are known for their protection against chronic diseases. Haskap is rich in polyphenols that have the ability to act as an excellent inflammation determent. Apart from that it also consists of anthocyanin that has anti-inflammatory properties and might help prevent or fight against gingivitis and rheumatoid arthritis.

As we all know that Haskap Berries consists of good amount of anthocyanin, it may help keep your eyes healthy. Anthocyanin is confirmed to be beneficial for good eyesight. This also helps to increase circulation within the retinal capillaries, enhancing the night vision. It also helps fight macular degeneration and prevents retinopathy in diabetic patients.

Oxidative DNA damage is said to occur thousands of times per day and in every single cell in the body. It is the part of the reason we grow older and plays an important role in the development of cancer cells. Research proved that those who consumed haskap on a daily basis reduced their free radical content in the body by 25 percent.

This anthocyanin-rich fruit may help you keep your veins healthy by nullifying the enzymes that destroy connective tissue, by repairing the damaged proteins in the blood-vessel walls. It helps in promoting healthy circulation of blood through your heart. The oxidation of LDL is a crucial step in the heart disease process. The antioxidants in haskap berries are strongly linked to reducing the levels of oxidized LDL. Research has shown that consuming 75 grams of haskap berries with the main meal greatly reduced the oxidation of LDL lipoproteins. It consists of additional chloro-genic acid and phytochemicals that may provide a healthy cardiovascular benefit by controlling blood pressure.

Oxidative stress results in brain’s ageing process and can have a negative effect on brain function. Anti-oxidants present in haskap berries tend to encourage in the areas of the brain that are important for intelligence. These anti-oxidants directly interact with the ageing neurons which leads to improvements in the cell functioning.

Several researches have shown that honeyberries have anti-diabetic effects. The bioactive compounds in honeyberry cancel out any negative impact on the sugar that leads to maintaining the blood sugar level. Anthocyanins present in haskap berries have beneficial effects on the insulin and glucose sensitivity. Consuming haskap berry smoothie can cause major improvements in the insulin sensitivity and lowers the blood sugar level.

Like blueberries, haskap berries consists of substances that can help prevent the bacteria binding on the wall of the urinary bladder. These infections are a very common problem in women and haskap berries may be useful in preventing such type of infections.

Haskap berries have as much as three times the amount of antioxidants as a blueberry, making it a nutrient-packed super food. Antioxidants combat free radicals, in our body by binding to them and removing their hydrogen bond. Once this hydrogen bond is removed, these bad cells have the potential to become free radicals themselves, which creates an alkaline or balanced environment in which chronic diseases cannot thrive in.

They are believed to be beneficial in treating chronic conditions such as cancer, heart disease, stroke, Alzheimer’s disease, Rheumatoid arthritis, and cataracts. Antioxidants are crucial to digestive health as they promote a healthy immune system as well as the growth of good bacteria.

Haskap berries are also high in potassium, which is needed to build protein and muscle, metabolize carbohydrates, and maintain normal body growth. Potassium, along with the help of sodium, helps to balance fluid and electrolyte levels in the body, which is important for hydration. 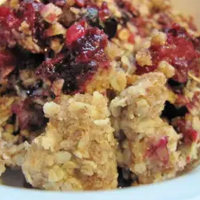 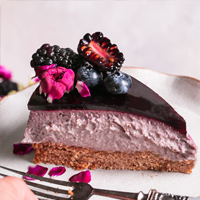 Step 1: Make the Base

Combine 1 3/4 cup graham crumbs and 1/4 cup melted butter in a medium mixing bowl. Using a fork, mix the butter with the graham crumbs until the crumbs are fully coated. Press the mixture into a springform pan and bake at 350 degrees for 8-10 minutes. If you do not have a springform pan, line your pan with parchment paper or lightly grease.

In a medium sauce pan, add 2 cups of water, 3 cups of haskap berries, and 1/2 cup sugar. Stir frequently on med/high heat. Bring to a boil. Reduce heat to medium. Mix 3tbsp of cornstarch with 3tbsp of water until smooth. Add cornstarch and water to the berries. Stir until the mixture thickens. Remove from heat and let topping cool completely. I cool mine in the fridge. The mixture will thicken more as it cools.

Beat 2 pkgs of cream cheese until smooth. Slowly add 1/2 cup sugar and 1 tsp. of vanilla. Beat mixture until well blended. In a separate bowl whip the cream until it forms soft peaks and then slowly add it to the cream cheese mixture.

Step 4: Putting it all Together

Smooth the cream cheese mixture over the cooled crust. Pour the chilled haskap berry mixture evenly over the top. Place in the fridge overnight.

Gather the family together and enjoy this new variant on an old favorite. Nana’s haskap cheesecake will leave you searching for more ways to enjoy haskap.