Trending
You are at:Home»Medicines»Medicinal benefits of Turmeric and Ginseng 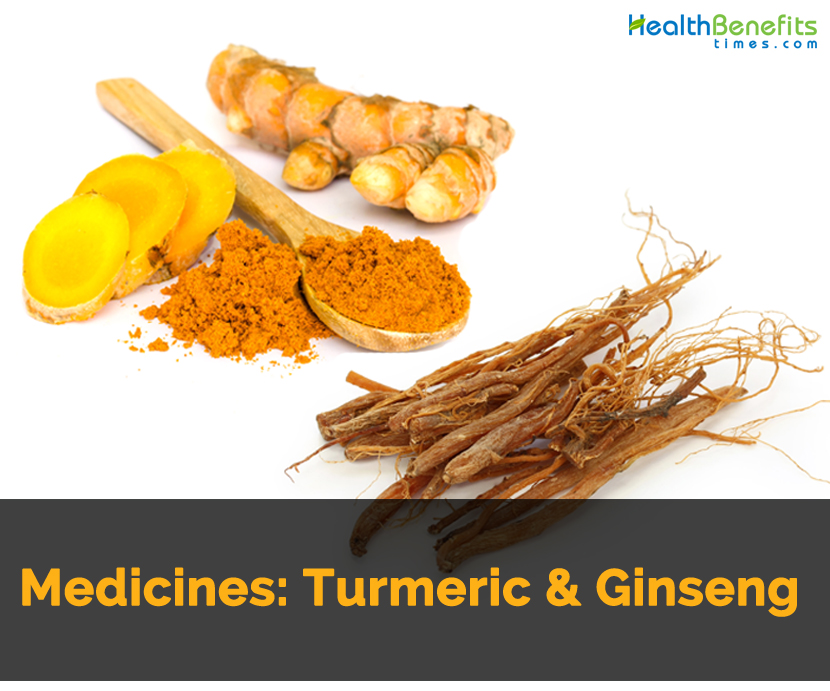 Turmeric (Curcuma longa) is a plant that is grown in India, Asia and Africa. Its trademark golden color makes it a popular fabric dye, and its mild but distinctive taste makes it a common ingredient in many Indian and Asian dishes, such as curry powders and flavored rices.

Similar to its relative, the ginger plant, the part of the turmeric plant used in spices and supplements is the underground stem (rhizome). Turmeric is available as a powder, capsule, tea or extract. In some cases, it’s made into a paste to apply to the skin.

Traditional uses of turmeric are many, and range from relieving joint pain to regulating menstruation. Turmeric has also been used on the skin for eczema, for itchiness and to help wounds heal. More recently, uses include treating inflammation, heartburn, gallstones and cancer.

Although turmeric has been used for thousands of years in India and Asia, relatively little scientific research has been conducted to support its use for health conditions.

Some studies suggest that turmeric — and, more specifically, a chemical found in turmeric called curcumin — may be an effective treatment for pain, inflammation, high cholesterol and other medical conditions, but more research is necessary to confirm these findings.

For most adults, turmeric is safe to use — so there’s no harm in trying it to see if it works for you. Side effects are usually mild, though there is some evidence that high doses or long-term use may cause indigestion, nausea or diarrhea.

Ask your health care provider about taking turmeric if you have gallbladder disease, since it may worsen the condition, or if you take an anticoagulant medication, such as warfarin, as turmeric may increase the risk of bleeding.

What the research says

Several studies on turmeric’s relation to osteoarthritis have been conducted. Research suggests that turmeric may reduce pain and increase ease of movement in people with this condition. In fact, when it comes to pain relief, one study found that taking turmeric extract three times daily was comparable to taking 1,200 milligrams of ibuprofen daily. While these results are promising, more research is necessary.

Some evidence suggests that turmeric might lessen some of the symptoms of rheumatoid arthritis, such as joint swelling and morning stiffness. More research is needed to confirm these findings.

The term ginseng is associated with 13 different species of perennial, deciduous plants in the genus Panax. As a supplement, however, ginseng most commonly refers to Asian ginseng (Panax ginseng) and sometimes refers to American ginseng (Panax quinquefolius).

Asian ginseng grows in China, Korea and Siberia. The gnarled, brown ginseng root is the part of the plant that’s used in supplements. Ginseng root sometimes resembles a human body because of the stringy offshoots that look like arms and legs. Due to that resemblance, practitioners of traditional Chinese medicine often considered the herb a cure-all for most human ills, including: allergies, asthma, appetite stimulant, bleeding disorders, breathing difficulties, cancer, dizziness, headache, heart disorders, insomnia, liver disease, stroke and many more. Asian ginseng has been used for health-related purposes for more than 2,000 years.

Ginseng is considered safe when taken for short periods. Side effects, if any, tend to be mild and include headaches and sleep and gastrointestinal problems.

However, don’t use ginseng for more than six months or exceed the recommended maximum daily doses. Also, avoid taking ginseng if you’re pregnant, as some research suggests it could contribute to birth defects.

Evidence suggests that short-term use of ginseng may improve mental performance and that it produces few side effects when taken as directed. Therefore, ginseng gets a green light. However, do not take ginseng for an extended period of time. More research is needed before specific recommendations regarding its use can be made.

More studies are also needed to determine how effective ginseng is in terms of other conditions such as cancer and diabetes.

What the research says

Research suggests that ginseng may improve sexual function in men who have erectile dysfunction.

Some athletes use ginseng to improve stamina, but it’s unclear whether it provides any benefit. Research does suggest that ginseng does not improve aerobic performance. More research is necessary.

Ginseng appears to have some antioxidant effects that may benefit people with heart disorders. However, better studies are needed to make a firm recommendation.

Studies report that ginseng may modestly improve mood, reaction times, and thinking, attention and learning performance in healthy middle-aged people. There is also some evidence that — while ginseng does not appear to improve memory — it may have a positive effect on cognitive performance in people with Alzheimer’s disease. More research is needed.

Evidence for ginseng’s effect on type 2 diabetes is mixed. Some studies report that ginseng may lower blood sugar levels in people with type 2 diabetes, while other studies suggest that ginseng does not significantly improve glucose concentrations. More research is needed.