Trending
You are at:Home»Herbs and Spices»Musk mallow uses and benefits 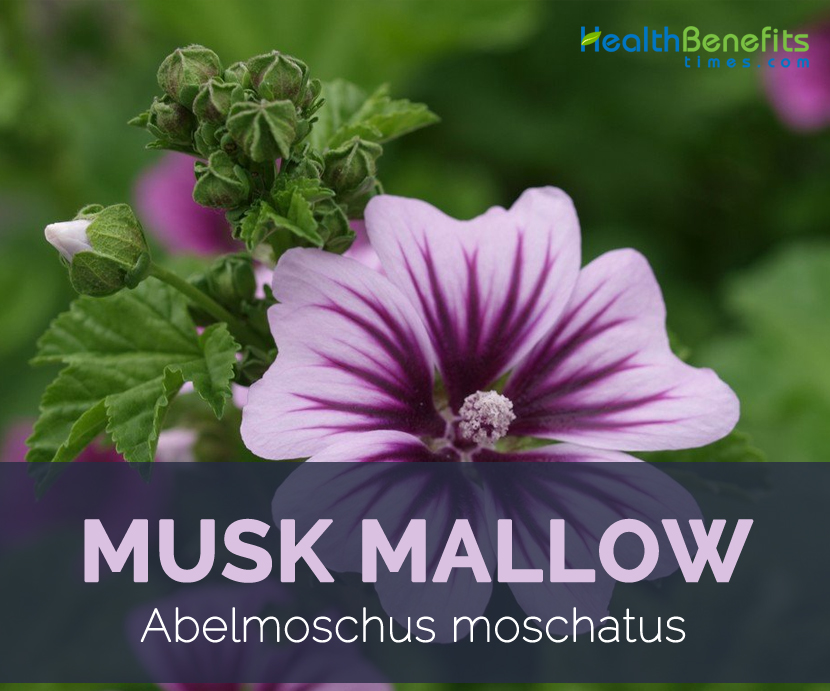 Musk mellow scientifically known as Abelmoschus moschatus is an aromatic and medicinal plant native to India in the Malvaceae family. Abelmoschus is derived from Arabic ‘Abu-l-Mosk’ (father of musk) and moschatus means musk smelling (in Latin). Musk mallow drives its name due to the musk like fragrance of its flower. It is a non-toxic plant with edible leaves, flowers and seeds. The flowers and seeds can be eaten raw. Every part of this medicinal plant is used in one or the other way. Apart from musk mellow it is also known as Ambrette seeds, Annual hibiscus, Musk mallow, Musk seeds and Ornamental okra. The seeds have a sweet, flowery, heavy fragrance similar to that of musk.

Abelmoschus moschatus is a soft, herbaceous trailing plant, 0.5- 2.5 meters high with soft hairy stems and a long slender tap root. Leaves are polymorphous, ovate-cordate or more usually palmately cut into 3-5 acute lobes, dentate-serrate, hairy on both sides. Petiole is usually longer than leaves, with long deflexed hairs. Stipules are small and subulate. Flowers are solitary, axillary, large, 3-4 inch, bright yellow, with a purple center. Pedicels are stout, curved, much thickened beneath the flower. Epicalyx segments are 6 – 10, fulvous-hairy. Calyx is spathaceous, deciduous. Corolla is yellow with purple center. Stamens are monadelphous. The flowers are hermaphrodite (have both male and female organs) and are pollinated by Insects.

Fruit is long, lanceolate in form of capsule with numerous greyish-brown-blackish seeds, kidney-shaped, slightly compressed with shallow depressions on both sides. They are not velvety to touch. They smell musk-like but with no taste.

Abelmoschus Moschatus (Ambrette) is a nutritious and healthy wild vegetable. It can lower cholesterol and prevents atherosclerosis. Listed below are some of the popular health benefits of Musk Mallow:

The fiber content in seedpods and mucilage substance in Abelmoschus Moschatus helps reducing habit of constipation. It lubricates the gut and eases in passing stools. Ambrette is beneficial in constipation with dry and hard stools.

Ambrette seeds are used for their diuretic action in urinary diseases. Seeds also have anti-inflammatory and antimicrobial properties due to which they help in reducing inflammation and infection of urinary tract and urinary bladder.

Abelmoschus moschatus also known as Ambrette seeds, Annual hibiscus, Musk mallow, Musk seeds, Ornamental okra is an aromatic and medicinal plant native to India. The ambrette seeds have a sweet, flowery, heavy fragrance similar to that of musk. Abelmoschus manihot is used to make neri, a starchy substance used in making Washi. It is a non-toxic plant with edible leaves, flowers and seeds. The flowers and seeds can be eaten raw. Every part of this medicinal plant is used in one or the other way. Musk mallow drives its name due to the musk like fragrance of its flower.