Trending
You are at:Home»Fruits»Rowal fruit facts and health benefits 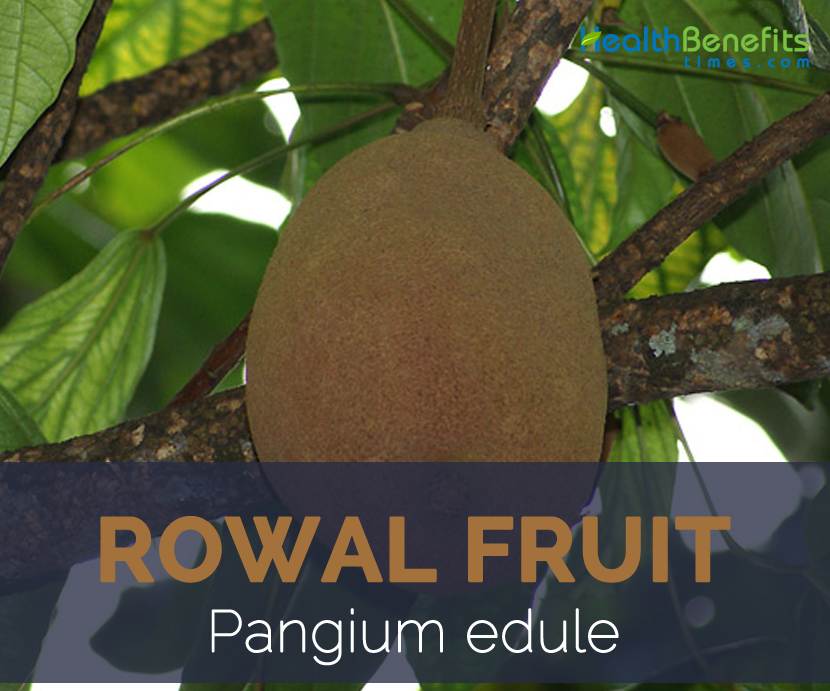 Pangium edule also known as Rowal fruit is a tall tree in the Flacourtiaceae family and is native to Malesia, Melanesia and Micronesia. Apart from Rowal fruit it is also known as pangi, pakem, sis, riamel, kepayang football fruit and Sis Nut. In Indonesia, it is used to make a number of distinctive dishes. Apart from that it is also called Pucung in Indonesia, Rumrum in Papua New Guinea, Rawahn Falaka in Solomon Islands and Peyang in Malaysia.

Rowal fruit is actually a medium to large; much branched, evergreen perennial tree sized 18–40 m tall. The tree prefers little shade and is normally found growing in a slightly acidic soil. It is also found along riverbanks and inundated areas and on stony and clayey soils. It grows rapidly in the initial years. Trunk is up to 1 m of diameter with grey brown bark. Leaves are entire, broadly ovate, cordate to truncate base, 15–25 cm long, 3-lobed on young trees, acuminate, glossy green, nerves palmate. Flowers are mostly unisexual; male flowers occur in racemes, to 5 cm wide; with 2–3 calyx-lobes; 5 or 6 petals with a basal scale and many stamens. Female flowers are solitary, similar to male flowers, but have no stamens but with 5–6 staminodes alternating with the petals, ovary long-ovoid, thick-walled, 1-celled with 2–4 placentae and many ovules and sessile stigma.

Fruits are the size and shape of footballs. Fruits are normally large, sub globose to ovoid-sub pyriform (football shaped), indehiscent, rough, brown, generally 15–30 cm long, and about half as thick. The exterior color of the fruits is brown. The outside skin is rough to the touch. The inner skin (rind) is pale yellow to white, around an inch thick. The skin is able to absorb falls from thirty feet without damage to the flesh inside. The inside is composed of large seeds surrounded by pale yellow to bright yellow flesh. The flattened grayish-brown seeds are about two inches long. The flesh has a strong aroma. Some people compare the taste and smell to durian. The fruit is normally eaten when the skin is soft to the touch.

Pangium edule also known as rowal fruit occurs throughout Malesia, Melanesia and Micronesia. They are mostly grown wild and cultivated in Malaysia, Indonesia, Papua New Guinea and Vanuatu. But nowadays it is found growing in almost all parts of the world with suitable environment.

Rowal fruit consists of considerable amount copper which is essential for normal growth and health. Thus, it is very important to include this mineral in balanced levels in your regular diets. Apart from that it is also helpful in the protection of the skeletal, nervous and cardiovascular systems. If you suffer from a copper deficiency, the normal and healthy growth of organs and tissues, as well as their proper oxygenation from an ample red blood cell concentration, would be impossible. So including copper rich foods like Rowal fruit in your regular diet will help to gain required amount of copper.

Vitamin C found in Rowal fruit is related with lowering the risk of gout. Gout is actually a painful, arthritis type condition mostly bothering the big toe. Big toe becomes stiff, swollen and painful as a result of excess uric acid leading to crystals formed in joints. Regular consumption of Rowal fruit is quite helpful for overcoming the gout problem as it consists of 58.8 mg of Vitamin C which is 65.33% of the daily recommended value.

Rowal fruit consist of 5.02 mg of iron which is actually 62.75% of the daily recommended value. As we all know that Iron plays a key role in providing strength to the immune system of the human body. Thus, the body is made proficient enough to fight against a number of diseases and infections. Red blood cells are essential for providing oxygen to damaged tissues, organs, and cells. Without it, there would be no hemoglobin; without hemoglobin, there would be no oxygen. The healing process needs iron to happen!

Dietary fiber found considerably in Rowal fruit help to increase the weight and size of stool as well as softens it. A bulky stool is easier to pass, reducing your chance of constipation. If you have loose, watery stools, fiber may help to solidify the stool because it absorbs water and adds bulk to stool. So including fiber rich foods like rowal fruit will be beneficial for normalizing bowel movements.

Magnesium found in Rowal fruit is associated with lowering the risk of coronary heart diseases. Dietary research has recommended that adequate magnesium intake help to reduce the chance of having a stroke. Magnesium deficiency increases the risk of abnormal heart rhythms, which increases the risk of complications after a heart attack. Thus, consuming recommended amounts of magnesium dietary supplements may be beneficial to the cardiovascular system.

Regular consumption of Rowal fruit has the ability to remove minor health problems like muscle weakness, numbness, fatigue and similar ailments due to the presence of phosphorus. Normal levels of phosphorous within the body are a wonderful way to remain fit and active. According to experts and from suggestions of various health practitioners a normal amount can be approximately 1200 mg for adults. Apart from that sexual weakness can also be cured with healthy supplementation of phosphorous into the body, so issues like loss of libido, frigidity, impotence, and sperm motility can be boosted by having an adequate supply of phosphorus in your system.

Many women can suffer from premenstrual syndrome (PMS). Manganese contained in Rowal fruit helps to manage mood swings and reduce headaches, depression, and irritability. Women who suffer from severe PMS symptoms are recommended to consume manganese supplements as well as foods that are rich in manganese like Rowal fruit.

Other Traditional uses and benefits of Rowal fruit