Trending
You are at:Home»Vegetables»Sesbania facts and health benefits 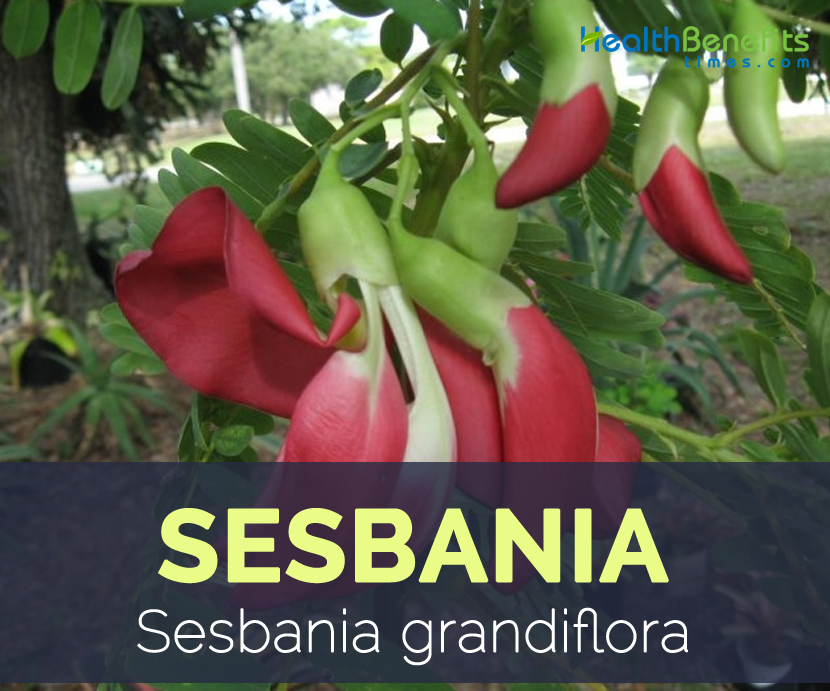 Sesbania grandiflora also known as agate or hummingbird tree is a small tree in the genus Sesbania and is believed to have originated either in India or Southeast Asia and grows primarily in hot and humid tropical areas of the world. Commonly it is known as caturay, katurai, corkwood tree, scarlet wisteria, sesban, vegetable hummingbird in English, agati a grandes fleurs in French, Ta-Hua in Chinese, Agasti in Nepali, Baculo in Spanish, A Ga Sta in Tibetan and lots more. Sesbania grandiflora belonging to family Leguminosae and contains plenty of sterols, saponins and tannins which are liable for its various pharmacological properties and has been widely used in Ayurveda for processing of several formulations in Rasashastra. Leaves, seeds, pods and flowers of S. grandiflora are edible. Flowers are the most widely used part, and white flowers are preferred to the red. The tree has a life span of about 20 years.

Sesbania grandiflora is a small, erect, quick-growing, open-branched, unarmed, perennial tree growing up to 15 m tall and 25-30 cm in diameter. It thrives under full exposure to sunshine and is extremely frost sensitive and grows well in wide range of soils including those that are poor and waterlogged. It tolerates saline and alkaline soils and has some tolerance to acidic soils. Roots are heavily nodulated with large nodules. Trunk is nearly 30 cm long with drooping branches and bark is light gray, corky and deeply furrowed and the wood are soft and white. Its leaves are glaucous, deep green, pinnately compound up to 30 cm long with 20-50 leaflets in pairs. Leaflets are oblong, to elliptical, obtuse apex, about 2–3 cm long. Flowers are large, white, yellowish, rose pink or red, 7-9 cm long with a calyx 15-22 mm and corolla with standard and wings, staminal tube and glabrous ovary and style. Pods are pendent, slender, long (20-60 cm) and thin (6-9 mm) with broad sutures, cylindric, green, indehiscent containing 15–50 seeds. Seeds are beanlike, elliptical, red brown, 6-8 in a pod, 3.5 mm, and each weighting 1 g.

Leaves of the Sesbania grandiflora plant can be consumed in a number of ways. Leaves are glaucous, deep green, pinnately compound up to 30 cm long with 20-50 leaflets in pairs. Leaflets are oblong, to elliptical, obtuse apex, about 2–3 cm long. They are usually bitter, sour, and mildly tart in taste and are consumed as one of the staple food around the world. The dried leaves are used in some countries as a tea, which is considered to have antibiotic, anti-helminthic, anti-tumor, and contraceptive properties.  Young leaves are used in curries and soups, lightly fried, steamed or boiled.

Leaves, seeds, pods and flowers of S. grandiflora are edible. Flowers are the most widely used part, and white flowers are preferred to the red. Plants consist of large pea-like flowers and grow in clusters of 2-5 at the base of leaves. Flower is normally large, white, yellowish, rose pink or red colored and 7-9 cm long with a calyx 15-22 mm and corolla with standard and wings, staminal tube and glabrous ovary and style. They have acrid, bitter, and astringent taste and are eaten both cooked and raw, in salads, curries, and as a steamed vegetable.

Sesbania grandiflora is considered to have originated from South Asia and Southeast Asia with possibly Indonesia as the center of diversity. It is closely related to the Australian species, Sesbania Formosa. Today, agathi grows throughout Mexico and the US Southwest region, the warmer areas of South America, and parts of Africa. In West Africa, for example, agathi’s been cultivated for the past 150 years. It’s also an exotic plant in Cuba, the Dominican Republic, Hawaii, and Nepal.

Including vitamin C rich food in your normal diet plays a strong role in heart health. People who eat a diet rich in antioxidants like vitamin C may have a lower risk of high blood pressure. Sesbania is one of the best options for getting vitamin c as one cup of sesbania consists of 14.6 mg of vitamin c which is 16.22% of the daily recommended value.

Vitamin C also plays an important role in slowing down the progression of hardening of the arteries (atherosclerosis). It may help keep your arteries flexible and prevents damage to LDL cholesterol. People with low levels of vitamin C are at increased risk of heart attack, peripheral artery disease, and stroke, all of which can stem from atherosclerosis.

Folate present in sesbania plays an essential role in fetal development and is beneficial for pregnant women. Folate deficiency during early pregnancy may lead to neural tube defects. It is a serious problem that may result in pregnancy termination or a baby born with spina bifida. Studies have found increased folate levels from one month prior to conception to 3 months afterward can reduce the chance of these defects by 50%. Including folate rich foods like sesbania help to overcome this problem since it contains 20 µg of vitamin B9 which is 5.00% of the daily recommended value.

Pale skin and dark circles are the most common signs of anemia caused due to iron deficiency. The lack of iron causes hemoglobin levels to decrease, resulting in the subsequent reduction of RBCs. The reduced oxygen flow can deprive your skin of its color, making it look sallow. A healthy dose of iron-rich foods in your daily diet can give your skin a pinkish glow. Since sesbania consists of iron therefore it is best to include sesbania in your to get considerable amount of iron regularly.

Selenium is essential for the proper functioning of the immune system, and can also be a key nutrient in lessening the development of viruses including HIV. In patients who already contracted HIV, selenium has been shown to also be useful in slowing down the progression of the disease into AIDS. Sesbania is among the best alternative to obtain selenium from your normal diet.

Sesbania consists of vitamin B1 which is thought to slow down the progression of Alzheimer’s disease. People suffering from this disease have benefited when treated with vitamin B1 supplements of 100 mg per day. Therefore including sesbania in your regular diet is beneficial for getting vitamin b1. There are placebo-controlled trial researches that are ongoing to determine more about the mechanism by which this occurs.

People who don’t get enough riboflavin tend to experience regular headaches and even migraines. However, when a person gets sufficient riboflavin, the number of headaches is reduced. Research on 55 patients displayed that those who took 200-400 mg of riboflavin had considerably fewer migraines and headaches than those given the placebo. This reduced both the frequency and intensity of the headaches. Therefore vitamin B2 rich food must be consumed to solve the migraine problems and remain healthy and happy life.

Sesbania has the ability to remove minor health problems like muscle weakness, numbness, fatigue and similar ailments because it consists of considerable amount of phosphorus. Normal amount of phosphorous in the body are a great way to remain fit and active. According to the experts and suggestions of various health practitioners a normal amount can be around 1200 mg for adults. Apart from that sexual weakness can also be cured with healthy supplementation of phosphorous into the body, so issues like impotence, loss of libido, frigidity, and sperm motility can be boosted by having a sufficient supply of phosphorus in your system.

Other Traditional uses and benefits of Sesbania