Trending
You are at:Home»Herbs and Spices»Health benefits of Toothache Plant 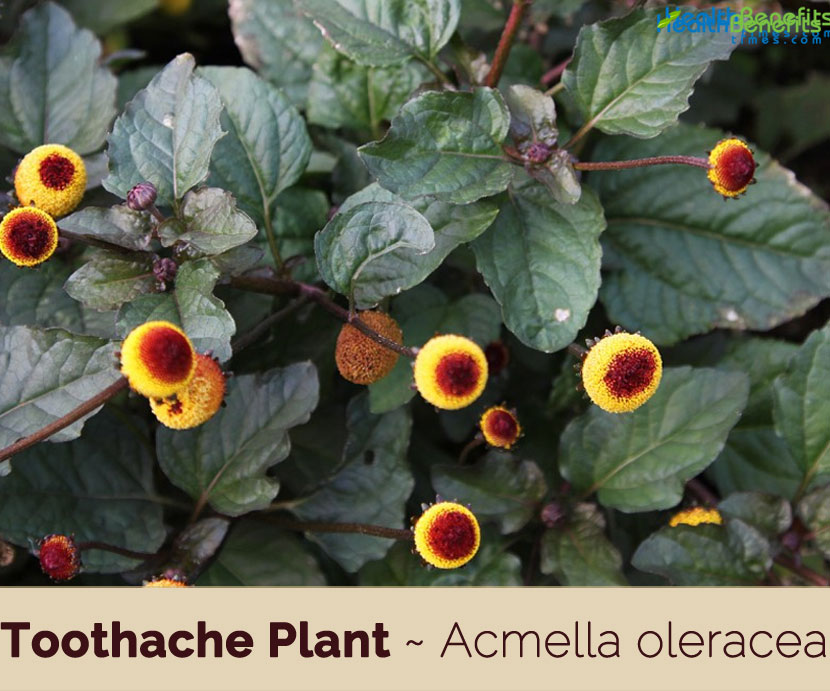 Acmella oleracea commonly known as Toothache Plant is a species of flowering herb in the family Asteraceae. Other popular common names of the herb are Brazil Cress, Eyeball Plant, Para Cress, Peek-ABoo Plant, Perennial Para Cress and Spot Flower. In Brazil it is called jambu and in Maharashtra it is called ‘अक्कलकाढा ‘. The plant is native to Brazil. It has been introduced across the tropics, and in Africa, escapes from cultivation have been reported. The plant is now grown both in the tropics and subtropics including America, Northern Australia, Africa, Southeast Asia, India and Sri Lanka. It is grown as an ornamental and it is used as a medicinal remedy in various parts of the world. A small, erect plant, it grows quickly and bears gold and red inflorescence. It is frost-sensitive but perennial in warmer climates.

Toothache plant is an erect, or decumbent, stout, branched, annual herb that grows about 20–80 cm tall with erect stems not usually rooting at nodes. The plant is found growing in moist, damp environment, in villages, pastures, rice fields and cultivated areas, along ditches, marshy meadows, open waste places, old clearings, on open hillsides and the rocky shores of rivers, and along roadsides and normally prefers well-drained, black (high organic content) soil.  The plant is frost-sensitive but perennial in warmer climates. Water regularly, but do not over water, as it can be prone to mildew and mold. This plant can also be grown in containers. Leaves are opposite, glabrous, simple, broadly ovate to triangular, 5–11 cm long, 4–8 cm wide, base truncate, apex acute, margin serrate.

Flower-heads are disc-like, solitary, borne in panicles carried on 2.5-16cm long stalks in lead axils or terminal. Heads are 8.4-12.5mm tall, 6.9-10mm in diameter. Receptacle (thickened part of a flower stalk) is 5-8 mm tall, 1.1-3mm in diameter. Involucral bracts (a series or bracts beneath or around a flower) are 9-12, ovate-lanceolate, 6mm long. Disc florets are 90-200, tubular, minute, and 4- or 5-lobed. Flowers are followed by Achenes (a type of simple dry fruit) that are obovoid, 3-angled, 3mm long, tip slightly depressed, margins scabrid. Pappus of 2 sub equal bristles, longer on 0.5-1.1mm long, shorter one 0.4-0.9mm long.

Flower is mainly ornamental but the flower heads contain a great amount of an analgesic agent known as Spilanthol. This is specially used to numb toothaches and gum aches as well. Ancient tribes of Central America have used the Spilanthes flower as a vegetable and also for its medicinal value. It was a remedy for toothache, digestive problems and also throat and gum disease. In India, it was used as an additive in tobacco for flavor. Its characteristic pungent and strong taste has given it a space in  the kitchens around the world, often consumed as tea, but as a condiments in some communities of northern brazil, in salads in the United States and added to steamed vegetables, soups and meats in India.

Even today the origin of A. oleracea is unknown. There is a scarcity of records of the plant from the wild. but one hypothesis postulates that this is due to a long periods of cultivation of Acmella alba in South America. Collections in Brazil and Peru support this hypothesis. According to this idea, after a long period of cultivation, A, oleracea may have spread in the tropics, but also there is a possibility that the Portuguese may have introduced the plant to the Indian Ocean Islands and then, around 1900, it spreads to Africa by Indian Laborers.

Toothache Plant is used to treat the oral diseases, fever, rheumatic pain and other ailments. The flower head and leaves are used for medicinal purposes which have a pungent taste, tingling and numbness. The leaves of Toothache Plant are used in Japan to treat joint pain, gout, rheumatism and arthritis. It is used for toothaches due to its anesthetic properties. The plant parts could increase the salivation and also cure the headaches. The mouth soreness could be treated with the dried flower head. The urinary stones could be helped by decoction of plant. The whole plant should be boiled in water which helps to treat dysentery. Scabies and psoriasis could be treated if the paste of the plant is used as lotion.

Toothache Plant possess libido stimulant, aphrodisiac and spermatogenic properties. The secretion of androgens and its production is influenced. Alkyl-amide found in Toothache Plant root expands the production of testosterone. Toothache Plant boost the fertility, improves lipido in male and increase spermatozoa count. It triggers the desire and raises the supply of blood to the genitals. It enhances libido and also increases sexual urges.

It performs the similar function as SILDENAFIL but does not increase the blood pressure. It should be used with Kaunch Beej (Mucuna Pruriens) and Ashwagandha (Withania somnifera) to obtain the benefits to the maximum. It triggers the circulation of blood in the urogenital area and provides the longer and stronger erections. It is also effective to treat the nervous and vascular weaknesses or disorders.

10 grams of Toothache Plant root should be boiled with 250 ml of water. This water should be used to gargle in order to alleviate pharyngitis. It is also effective for gum disease and toothache.

Massage with the mixture of Toothache Plant root powder and camphor which helps to relieve toothache. It could also be used with Vaividang (Embelia ribes), Ajwain Khurasani (Hyoscyamus Niger) and black pepper. Toothache Plant’s tooth powder could be made by drying the whole plant in shade and then grinding it to make powder. Alum and clove powder should be mixed. Toothache Plant tooth powder is prepared.

The pyorrhea could be treated with the mixture of mustard oil and Toothache Plant’s root powder.

The common cold could be alleviated if Anacyclus pyrethrum root powder is used with long pepper and black pepper. It possesses antiviral properties which alleviates the symptoms of flu and nasal congestion.

The tongue should be massaged with the mixture of honey and 125 mg of Toothache Plant’s root powder. This helps to improve the speech in children. It would be much effective when 125 mg Vacha is added to the mixture.

It vitalizes the nerves which are responsible for the sexual performance of men and ejaculation and also assist to delay ejaculation.

The presence of nervine and stimulating properties of Toothache Plant enhance the nerves and also assist to recover from Paralysis.

The presence of flavonoids in Toothache Plant strengthens the vessels and nerves and also prevents the disorders such as nervousness, phobias, vertigo, nausea etc. which is caused by the Nervous and Vascular weaknesses.

The presence of nervine properties in Toothache Plant could control the epilepsy which is a nervous and neurotic disorder. The mixture of vach powder and Toothache Plant powder should be taken twice in a day.

The condition of hemiphlegia could be improved with an application of root extracts of Toothache Plant.

It could relieve headache due to the presence of analgesic properties. The paste of Toothache plant should be applied on forehead. Or the juice which is extracted and few drops should be put in each nostril.

Toothache Plant’s roots possess sialagogue and cholagogue properties which enhances digestion with the secretion of saliva and digestive juices such as acids, bile etc.

The flatulence and gas could be relieved with the carminative property of Toothache Plant.

The extract of Toothache Plant root lessens the swelling in the artery and relieves the pain by lowering the pressure on nerves.

The presence of febrifuge properties helps to eliminate infections which leads to fever and lowers the temperature of body. Massage with the root powder which is cooked in olive oil so that it leads to sweating and assist in high temperature.

The presence of antiviral property counteracts with the infections which is the cause of sore throat and tonsillitis.

Toothache Plant stimulates the inner throat and alleviates the infection and inflammation by expelling the old catarrh.

Toothache Plant possess flavonoids and alkaloids which relieves the rheumatism and arthritis by counteracting the uric acid and vitalizing the circulation of blood.

The presence of diuretic properties in Toothache Plant enhances the digestion, provides relief from flatulence and weight loss.

The Emmenagogue property helps to regulate the menstrual cycles and clears the obstructed periods.

The oral intake of Toothache Plant’s roots helps to cure dry mouth. It increases the production of saliva by vitalizing the saliva glands and also cures this problem.

Toothache Plant is useful to treat stammering which is a nervous disorder. The mixture of honey, one gram Toothache Plant and black pepper should be rubbed on the tongue which causes the salivation and cures the dryness of tongue. It should be used for 1-2 months to obtain the results.

The application of Toothache Plant’s root activates the neuron which helps to treat dullness.

Toothache Plant effectively reduce the inflammation in the body.

Jamun leaves, Toothache Plant’s flower and mango leaves should be boiled with water. This solution should be used to gargle.