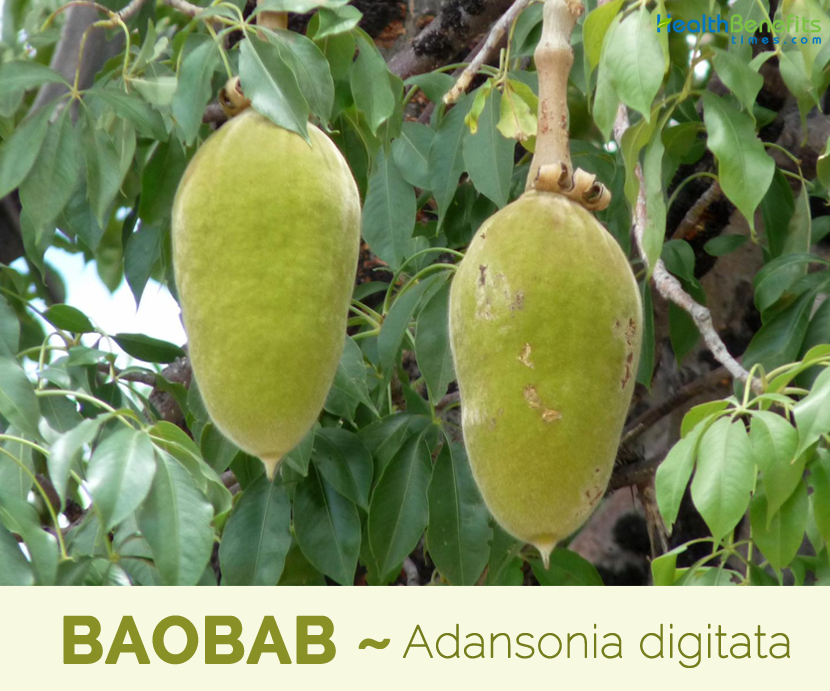 Adansonia digitata commonly known as baobab is the most widespread of the Adansonia species on the African continent, found in the hot, dry savannahs of sub-Saharan Africa. The plant is native to West Africa and migrated successively throughout the tropical parts of Africa, and beyond, by natural and human-mediated terrestrial and overseas dispersal. Other common names of the plant are African Baobab, Baobab, Bottle Tree, Cream Of Tartar Tree, Dead-Rat Tree, Ethiopian Sour Tree, Judas Fruit, Monkey-Bread Tree, Senegal Calabash, Sour Gourd and Upside Tree. It is a member of the Adansonia family. The vernacular name “baobab” is derived from Arabic بو حِباب (būħibāb), which means “father of many seeds”. The scientific name Adansonia refers to the French explorer and botanist, Michel Adanson (1727–1806), who observed a specimen in 1749 on the island of Sor, Senegal.

Baobab is a long living deciduous, gigantic, exotic tree that grows about 18–25 m tall but the trunk is short but massive, as much as 10–14 m in girth, often deeply fluted and typically cylindrical or bottle-shaped. The plant is found growing in drier, less tropical climates. The plant thrives on a wide range of soils which include stony, non-agricultural soil, rocky and lateritic soils, calcareous soils, clays, sands, alluvial silts and various kinds of loams. Roots are shallow but extensive lateral root system is greater than the height of the tree which accounts for it high water holding capacity. The roots end in tubers. Bark is smooth, reddish-brown or greyish with a purplish tinge or rough and wrinkled.

Leaves are simple to digitate, with up to 9 green and glossy leaflets but usually 5. Leaflets are elliptic to obovate-elliptic, 5–15 cm by 2–7 cm, sessile to sub-sessile, with acuminate tip, decurrent base, entire margin stellate pubescent below becoming glabrescent or glabrous. Stipule is early caducous, subulate or narrowly deltoid, 2–5 mm long, glabrous except for the ciliate margin. All baobab trees are deciduous, losing their leaves in the dry season and remains leafless for nine months of the year. The leaves are an excellent source of protein, minerals and vitamins A and C. It is used as condiments and medicines.

During the early summer (October to December in southern hemisphere) the tree bears very large, heavy, white flowers. These are 12 cm (4.7 in) across and open during the late afternoon to stay open for one night. The pendulous, showy flowers have a very large number of stamens. They have a sweet scent but later release a carrion smell, particularly when they turn brown and fall after 24 hours.

Flower is followed by baobab fruit that has a velvety hard outer shell and globose to ovoid to oblong-cylindrical, 7.5–54 cm long by 7.5–20 wide. It looks like a small coconut or a large mango. The fruit weighs about 1.5 kg. The pulp looks like marshmallows. But these “marshmallows” are not soft and tender; the flesh (marshmallow-looking) around the oil-rich seeds is dry and powdery. This powdery pulp is milled and then packaged and transported worldwide. The powder is used in smoothies, juices, energy bars, and other foods. The taste is sweet, tangy, and has pear-like flavors. Seeds are reniform, dark brown to reddish black 10–13 × 8–10 × 4–5 mm, surrounded in pulp.

The plant has many uses medicinally and non-medicinally and it has been reported that every part of the tree is useful. The fruit pulp is used in multiple ways including an ingredient of drinks and ice products, dried and made into ‘milk,’ and eaten fresh. The leaves are a staple source of food in many rural parts of Africa, and the young leaves especially are used in soups or cooked and eaten like spinach. The seeds are considered a possible source of protein and are sometimes roasted and used as a coffee substitute. The bark is formed into strong fiber that is used for all sorts of textiles, while the wood is used as fuel.

Baobab is a tree that grows in Africa, Australia, and the Middle East. Every part of the tree has traditionally been used as food, as medicine, or as the basis of clothing or household items. Baobab fruit is edible, and baobab seed powder is used in foods because of its nutrients, possible health benefits, and as a natural preservative. Listed below are some of the health benefits of Baobab fruit

Baobab consists of both soluble and insoluble fiber, which is why this fruit has been trusted as a gastrointestinal aid for generations. These types of dietary fiber are wonderful for the system; in addition to enhancing the digestive process and decreasing inflammation in the gut, dietary fiber also helps to regulate glucose and insulin levels in the blood, and even lowers negative cholesterol, thus boosting heart health! There are also certain prebiotic properties of baobab fruit that can improve the bacteria levels in your gut and enhance digestion. (1)

Potassium is another important mineral constituent of baobab fruit, which is known to be beneficial for heart health. As a vasodilator, potassium helps to ease the strain on the cardiovascular system by widening the blood vessels and arteries, therefore increasing blood flow and keeping the heart from working too hard. Lowering blood pressure can also help fight against atherosclerosis, strokes, heart attacks, and other cardiovascular complications. (2)

Antioxidants have been a recent slogan in natural health, and baobab fruit is loaded with these free radical-neutralizing compounds. Antioxidant levels can be measured based on the number of oxygen radicals a fruit or food is able to absorb, and baobab does very well in an ORAC test (measuring antioxidant strength). This means that baobab help prevent a wide range of chronic diseases, including some forms of cancer that develop when free radicals cause healthy cells to mutate. (3)

Baobab has been called a super fruit because of its concentration of certain minerals, including iron. This mineral is a key component of hemoglobin, which transports oxygenated blood throughout our body. This can avoid anemia and provide us with a major energy boost, so baobab fruit in any form can be appreciated for a quick pick me up! (4)

Immune system-boosting potential of this ancient fruit is definitely a result of the high ascorbic content. Baobab is good for increasing white blood cell count and stimulating the immune system to fight off foreign pathogens, in addition to vitamin C’s antioxidant behavior.(5)

Baobab consists of certain anti-inflammatory compounds that can help aid in a number of conditions, from injuries, aches, and pains to stomach upset and respiratory conditions. By reducing inflammation in the body, your immune system can focus on more important tasks, like eliminating pathogens and foreign bodies.

Dried powder of baobab fruit is mainly concentrated with minerals. Calcium and magnesium found in baobab are important minerals for bone strength. If you are concerned about bone mineral density loss as you age or are already suffering from some of the effects of age-related degradation, adding a baobab supplement to your health schedule is never a bad idea to keep your bones strong and durable into your old age! (6)

Vitamin C is also a key component of collagen, which we need for the repair and growth of tissues, cells, blood vessels, cartilage, and bone. High levels of ascorbic acid don’t just safeguard our immune system, but also safeguard normal development and appropriate healing times after injuries, illnesses, and surgeries. (7)

High calories and sugar contained in baobab fruit makes it ideal for consuming after workouts. This is why food companies add baobab fruit powder into energy bars and energy drinks. Magnesium in baobab fruit helps reducing muscle fatigue. Baobab fruit has been known since ancient time as a general-wellness-tonic. Native people in Africa consume the fruits regularly.

Inflammation is actually a root cause of all health problems in our body, including cancers. High level of antioxidants is known to kill and inhibit the growth of cancer cells. Baobab consist of good amount of antioxidant, thus it is quite beneficial for dealing with cancer.

Fibers found in baobab fruits help us feeling full longer and reduce food cravings. The fiber also reduces the absorption of sugar. Excess sugar in our body will be stored in fat tissues. So, baobab fruit is good for controlling body weight. Many health problems are connected to obesity, such as heart diseases, stroke, hypertension, diabetes mellitus, hormonal disorders and sleep disorder. Obesity also gives negative effect in our appearance; we will look less healthy, sluggish, along with dull skin.

Baobab fruit consists of high calcium, 2 times calcium of milk. Baobab fruit also contain phosphorus. Calcium and phosphorus are required to form density of the bones and prevent osteoporosis. These minerals are also needed to maintain density of dental enamel.

Baobab fruit consists of good amount of vitamin B that acts like tryptophan, an amino acid needed to relax the brain and gives better sleep. Calcium helps relaxing and calming muscles and nervous system, while iron is necessary to prevent restless leg syndromes and minerals (Calcium, Iron) help us calming our muscles and nervous system, gives us better sleep. Together, these substances can help us have good quality sleep, so we can feel fit and better in the next day.

Aiding in caring nails is the next benefits of baobab oil. By soaking your hands and feet into this oil, they will be softer and easier to take care of. Additionally, baobab oil is also helpful for mild ingrown toenails because the nail may become soft even easy to pull out. Your nails, as a result, can avoid unwanted breakage effectively.

Traditional uses and benefits of Baobab