Trending
You are at:Home»Poultry & Seafoods»Alaska pollock facts and health benefits 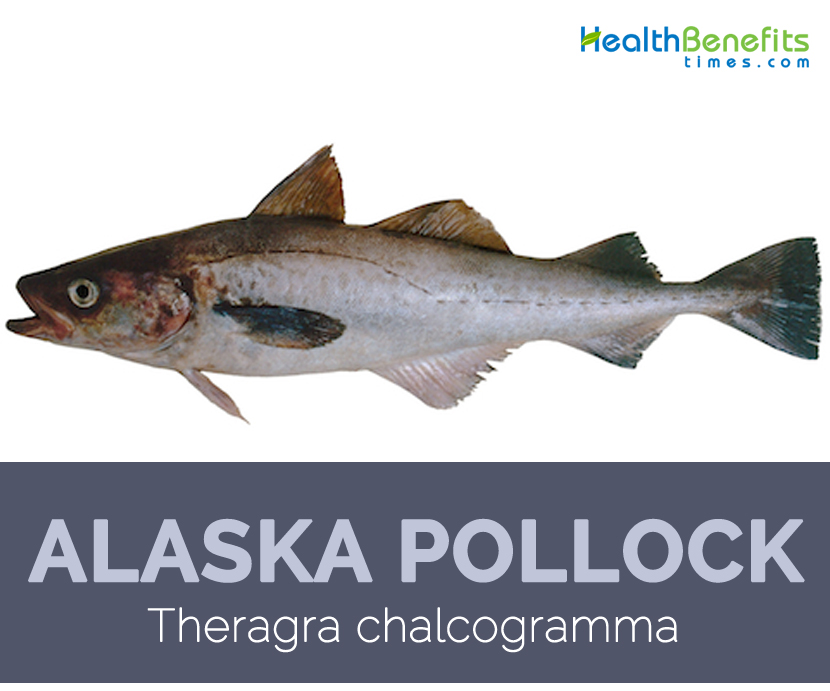 Alaska pollock or walleye pollock is a marine fish species of the cod family Gadidae. Alaska pollock is a semi pelagic schooling fish widely distributed in the North Pacific with largest concentrations found in the eastern Bering Sea. Alaska pollock was long put in its own genus Theragra, but more recent research has shown it is rather closely related to the Atlantic cod and should be moved back to genus Gadus in which it was originally described. Furthermore, Norwegian pollock, a rare fish of Norwegian waters, is likely the same species as the Alaska pollock. Alaska Pollock has consistently been one of the top five seafood species consumed in the U.S.

Alaska pollock is one of the most abundant and versatile fish in the world. It can grow as large as 3 feet (91 cm), but will typically average from 12 to 20 inches (31 to 51 cm) in length and from 1 to 3.5 pounds (0.45 to 1.6 kg) in weight. Alaska pollock has a mild taste with somewhat higher oil content than other whitefish species. It is one of the most efficient sources of protein, as its low in calories, carbohydrates and fat.

Alaska Pollock is a mild-flavored white fish with a delicate and flaky texture. Because of its adaptability, Pollock is consumed in a variety of forms that include fresh and frozen fillets, fish sticks and other breaded and battered fish products, and “surimi” products. Surimi is a stable frozen intermediate ingredient that is used to produce traditional Japanese “kamaboko” products that are formulated to imitate crab, shrimp and scallop meat. These products are commonly marketed in the U.S. as imitation crab, shrimp or lobster and are often the “seafood” in seafood salads, stuffed entrees and other products. Surimi is produced by mincing and washing Alaskan Pollock fillets and then adding other ingredients to stabilize the protein in the fish and enable it to be frozen for extended periods of time. Alaska Pollock fillets or mince is also frozen into blocks and used to produce fish sticks and portions that are sold in retail stores and used in a variety of products in fast food and other restaurants. Frozen and fresh fillets are also becoming more available in some markets.

Store pollock fillets up to 1 day refrigerated on ice. Keep in mind that due to higher oil content, pollock has a shorter shelf life.

While this versatile whitefish is normally used in surimi and fried-fillet sandwiches, it can hold its own in gourmet preparations. If a white fillet is desired, your odds are much better with single-frozen vs. twice-frozen Pollock, which is often grayer. Deep-skinned (fat line removed) Pollock offers a whiter, more “cod like” portion.

Alaska pollock is high in protein and low in carbohydrates and fat.

Alaska Pollock has consistently been one of the top five seafood species consumed in the U.S. It is a semi pelagic schooling fish widely distributed in the North Pacific with largest concentrations found in the eastern Bering Sea. Alaska pollock can grow to 15 pounds or more, but most of the fish caught commercially are less than 2 pounds, so most pollock fillets are 2-4 ounces in size. Market-sized Pollock can grow up to almost a meter (91 cm) and can weigh up to 4 kg. The fish has a strongly defined silvery lateral line running down the sides. Above the lateral line, the color is a greenish black and the belly is white. Pollock can be found between 180 m and 1,200 m deep in the water column and is available year-round.