Trending
You are at:Home»Fruits»Health benefits of Black cherry 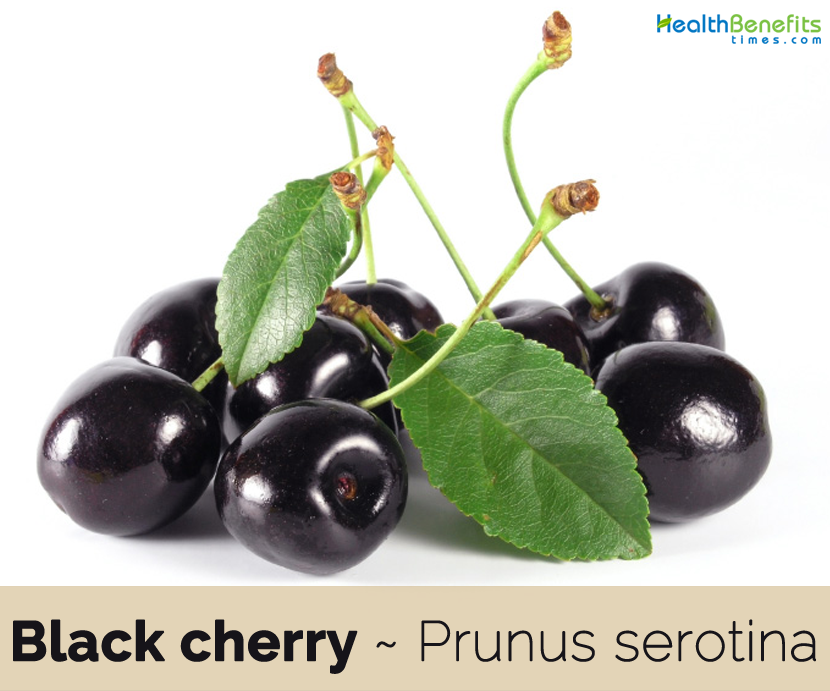 A mature black cherry can easily be identified in a forest by its very broken, dark grey to black bark, which has the appearance of very thick, burnt, cornflakes. Genus name comes from Latin means plum or cherry tree. Specific epithet comes from the Latin word for “late” in reference to the late flowering and fruiting of this cherry in comparison to other cherries. Fruits are bitter and inedible fresh off the tree, but can be used to make jams and jellies. Fruits have also been used to flavor certain liquors such as brandy and whiskey. Native Americans prepared decoctions of the inner bark for cough medicines and tea-like cold remedies. Hard, reddish-brown wood takes a fine polish and is commercially valued for use in a large number of products such as furniture, veneers, cabinets, interior paneling, gun stocks, instrument/tool handles and musical instruments.

Black cherry is a deciduous, fast growing, single-stemmed, medium- to large-sized tree that grows about 125 feet (38 m) in height and 4 feet (1.2 m) or more in diameter. In the forest it typically has a large, straight, branch-free bole with a narrow crown, but in openings it tends to have a shorter trunk and a broad, irregular crown. The plant is found growing in deciduous woodlands (dominated by oak, basswood-maple, & others), open woodlands, woodland borders, savannas, limestone glades, fence rows, power line clearances, vacant lots, and waste areas. The plant is easily grown in average, medium, well-drained soils. It performs best in moist, fertile loams soil. The root has shallow and spreading root system. Most roots occur within 24 inches (61 cm) of the soil surface. Bark on young stems is thin, smooth, and reddish-brown to nearly black. On large trunks the bark is fissured and scaly but remains thin breaking up into small, rough, irregular, upturned plates.

Twigs of black cherry are thin, shiny, reddish-brown, and with prominent dotted lenticels. They give rise to the smooth branchlets and branches that are reddish-brown to reddish-gray and brightly shine in reflected sunlight, with striking horizontal lenticels. Lenticels are fairly common on young stems and branches of most woody plants in the genus Prunus.

Leaves of Black Cherry are among the first to emerge in early spring. They are alternate, simple, and have fine serrations along their margins. The shiny leaves are dark green on their upper sides, light green on their undersides, and easily flutter in the breeze. Fall color is a subdued mixture of green, yellow, and orange hues, sometimes with a hint of red.

Showy white flowers of Black Cherry are arranged in long, pendulous, cylindrical structures that decorate the tree in mid-spring. Flowers are slightly fragrant, attract many bees, and later give rise to the fruits. Flowers are followed by drooping clusters of small cherries. They are nearly globular, one-seeded, 0.5 inch (1.2 cm) diameter drupe. Unripe fruits are normally orange in color which turns to red to black as they ripen. Fruit consist of an oblong-ovoid stone about 0.33 inches (0.75 cm) long. Fruits are bitter and inedible fresh off the tree, but can be used to make jams and jellies. Fruits have also been used to flavor certain liquors such as brandy and whiskey.

Apart from being pleasing to the taste buds, these small fruits are loaded with nutrients which can decrease the risk of many illnesses as well as treat symptoms of other medical conditions. Listed below are few of the health benefits of consuming black cherries.

Black cherries are considered beneficial for your heart because they provide protection against damage to your arterial walls. Melatonin present in black cherries helps to reduce the risk of stroke and heart disease by lowering blood lipid levels. The anthocyanin compounds also act as protective agents against heart disease. (1)

Arthritis is caused due to the build-up and crystallization of uric acid in the joints, causing immense pain. People having high levels of urate in their blood are at a risk of gout attack.  Research has proved that black cherry juice is effective in easing arthritis pain. This is because the anthocyanin compounds help in breaking up the crystals that form in the joints and cause pain. Drinking 8-16 ounces of black cherry juice daily for two weeks can prevent gout attacks by decreasing the urate levels. (2)

Including fruits and vegetables in your diet helps to reduce the likelihood of developing several types of cancer. Black cherries consist of several antioxidants that prevent the formation of cancerous cells. Black cherry juice is 100 percent fruit without added sugar and thus is equally beneficial.(3)

Inflammation occurs due to damage caused by free radicals and unfavorably affects the immune system’s natural response and is considered the chief factor for heart disease. Anthocyanin compounds which impart color to the black cherries have the potential to fight free radicals that occur in different parts of the body, thus preventing the inflammatory pathways. Black cherry extract is beneficial in reducing inflammation. (5)

Black cherries consist of significant amounts of melatonin, a potent antioxidant that is produced in the brain’s pineal gland and helps to regulate natural sleep patterns. Since black cherry contains more melatonin than that normally produced by the body, it is effective in fighting insomnia and depression. Drinking an ounce of concentrated black cherry juice an hour before sleep, helps in calming the mind and accelerates sound and peaceful sleep. (7)

Regular consumption of black cherry juice defends your skin from being damaged by harmful ultraviolet A and B rays of the sun. Anthocyanins provide protection against skin cancer because of their anti-carcinogen qualities. They also consist of beta-carotene which are beneficial for skin health and protect the skin form sun damage.(8)

Anemia is one of the most common causes of hair loss and to combat this problem you need to incorporate iron rich food in your diet. Black cherry juice is a rich source of iron and hence, regular intake of this juice can cure anemia, thus minimizing hair loss. (9)

Mercola states, “By helping reduce inflammation in the body, the anthocyanin and bioflavonoids in cherries also help eliminate migraine headaches. These compounds are known to have similar activity to aspirin and ibuprofen.”

Black cherries consist of a lower glycaemic index rating than many other fruits, so they don’t produce a blood sugar spike. They are a good snack choice for diabetics, as it is imperative that those with the condition keep their blood sugar levels as stable as possible.

According to scientific research it has been proven that daily consumption of this wild black cherry juice can reduce the uric acid levels thus causing less pain. It can eliminate the crystals in the joints which build up to form a blockage thus causing tremendous pain. Well, black cherry can fix that and relieve that pain. Because of these health benefits of black cherry, the extracts of this fruit is also known as dark liquid medicine.

Tips for picking up the right Black Cherry

When you are going to buy the cherries, you need to keep some points in your mind to get the best quality fruit from the lot. 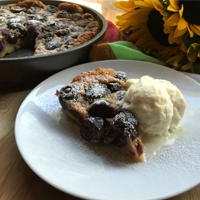 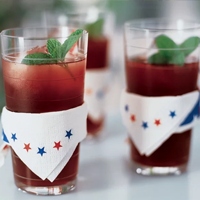