Trending
You are at:Home»Herbs and Spices»Facts and benefits of Bitter Apple 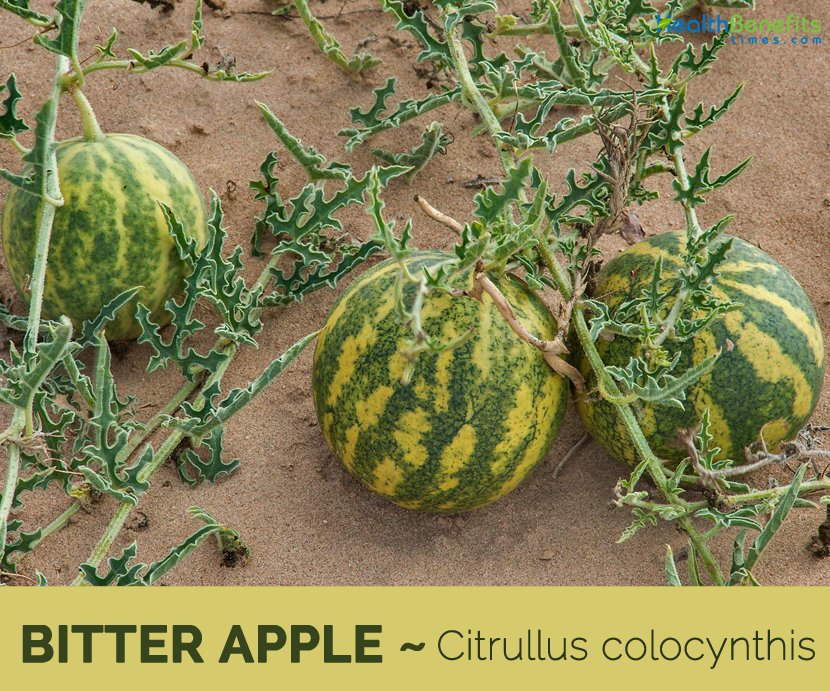 Citrullus colocynthis, with many common names including Bitter apple, colocynth, bitter cucumber, desert gourd, egusi, vine of Sodom, or wild gourd, is a hairy-stemmed perennial desert viny plant of the gourd family (Cucurbitaceae) native to the Mediterranean Basin and Asia and is distributed among the west coast of northern Africa, eastward through the Sahara, Egypt until India and reaches also the north coast of the Mediterranean and the Caspian seas. It grows also in southern European countries as in Spain and on the islands of the Grecian archipelago. On the island of Cyprus it is cultivated on a small scale; it has been an income source since the 14th century and is still exported today. It resembles a common watermelon vine but bears small, hard fruits with a bitter pulp. It originally bore the scientific name Colocynthis citrullus, but is now classified as Citrullus colocynthis.

Bitter Apple is an annual or perennial herbaceous desert vine plant with tendrils that can extend up to 3 meters. The plant is found growing in tropical deserts, wet forests as well as cool temperate moist regions. The plant requires sandy loam soils to thrive well. They can also grow proficiently on sub-desert soils as well as along sea coasts. Soil should be well drained. The Bitter Apple plant has a large fleshy, perennial root that sends out long and slender, angular, tough, rough vine-like stems. The stems are normally spread on the ground and have a tendency to climb over herbs and shrubs by their axillary branching tendrils.

The angular leaves are alternately located on long petioles. Each leaf is almost 5 to 10 centimeters in length and has around 3 to 7 lobes. Sometimes the middle lobe might have an ovate structure. The leaves have a triangular shape with many clefts. The leaves have a rough, hairy texture with open sinuses. The upper surface of the leaves are fine green in color and the lower surface is comparatively rough and pale.

The flowers are yellow and solitary in the axes of leaves and are borne by yellow-greenish peduncles. Each has a sub-campanulated five-lobed corolla and a five-parted calyx. They are monoecious therefore the male (stamens) and the female reproductive parts (pistils and ovary) are borne in different flowers on the same plant. The male flowers’ calyx is shorter than the corolla. They have 5 stamens, 4 of which are coupled and 1 is single with monadelphous anther. The female flowers have 3 staminoids and a 3-carpels ovary. The two sexes are distinguishable by observing the globular and hairy inferior ovary of the female flowers.

Each bitter apple plant produces around 15 to 30 globular fruits having a diameter of almost 7 to 10 centimeters. The outer portion of the fruit is covered with a green skin having yellow stripes. The fruits may also be yellow in color. The ripe fruits are characterized by a thin but hard rind. The fruits have a soft, dry, spongy white pulp which is filled with numerous ovate compressed seeds.

The seeds are grey and are 5 mm long and 3 mm wide, smooth, compressed and ovoid-shaped without an edge, oily and somewhat shiny. They are located on the parietal placenta. The seeds are light yellowish-orange to dark brown in color. They are edible but similarly bitter, nutty-flavored and rich in fat and protein. They are eaten whole or used as an oilseed. The oil content of the seeds is 17–19% (w/w), consisting of 67–73% linoleic acid, 10–16% oleic acid, 5–8% stearic acid, and 9–12% palmitic acid. It is estimated that the oil yield is approximately 400 L/hectare. In addition, the seeds contain a higher amount of arginine, tryptophan and the sulfur-containing amino acids.

Citrullus colocynthis is a desert viny plant that grows in sandy, arid soils. It is native to the Mediterranean Basin and Asia, and is distributed among the west coast of northern Africa, eastward through the Sahara, Egypt until India, and reaches also the north coast of the Mediterranean and the Caspian Seas. It also grows in southern European countries as in Spain and on the islands of the Grecian archipelago. On the island of Cyprus, it is cultivated on a small scale; it has been an income source since the 14th century and is still exported today. It is an annual or a perennial plant (in wild) in Indian arid zones and has a great survival rate under extreme xeric conditions. In fact, it can tolerate annual precipitation of 250 to 1500 mm and an annual temperature of 14.8 to 27.8 °C. It grows from sea level up to 1500 meters above sea level on sandy loam, sub desert soils, and sandy sea coasts with a pH range between 5.0 and 7.8. 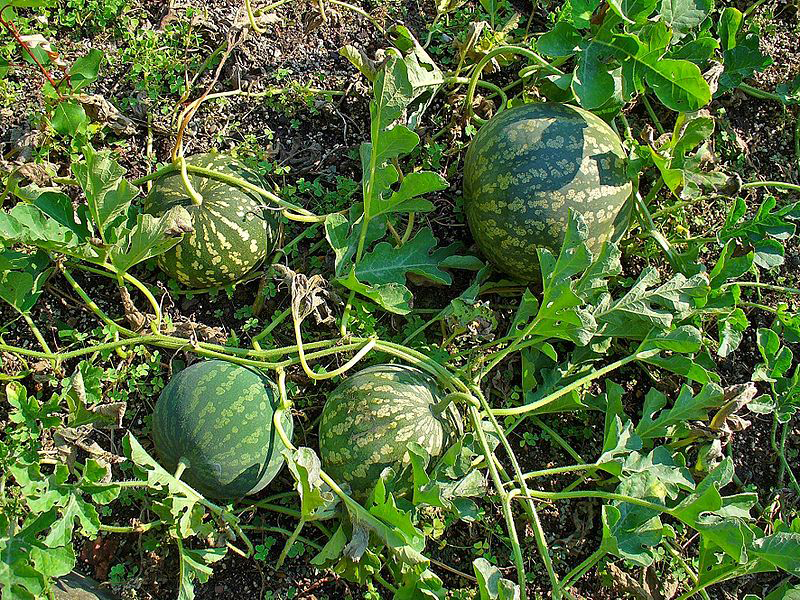 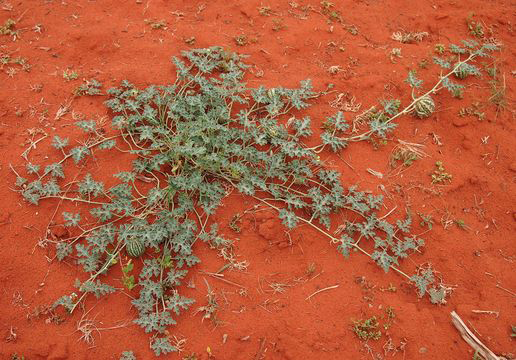 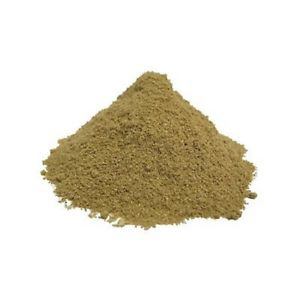 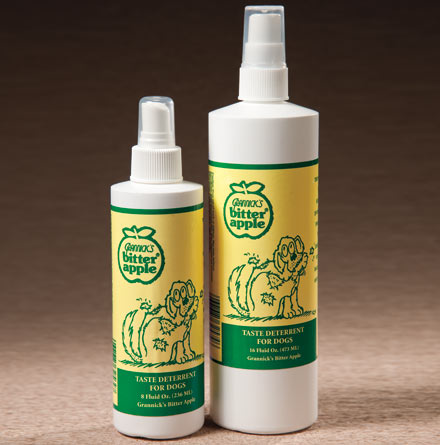 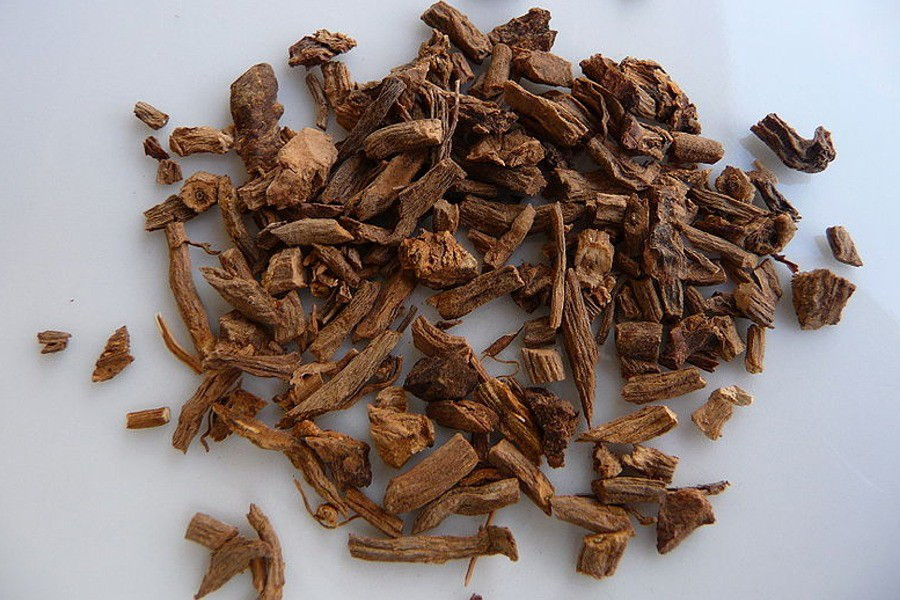 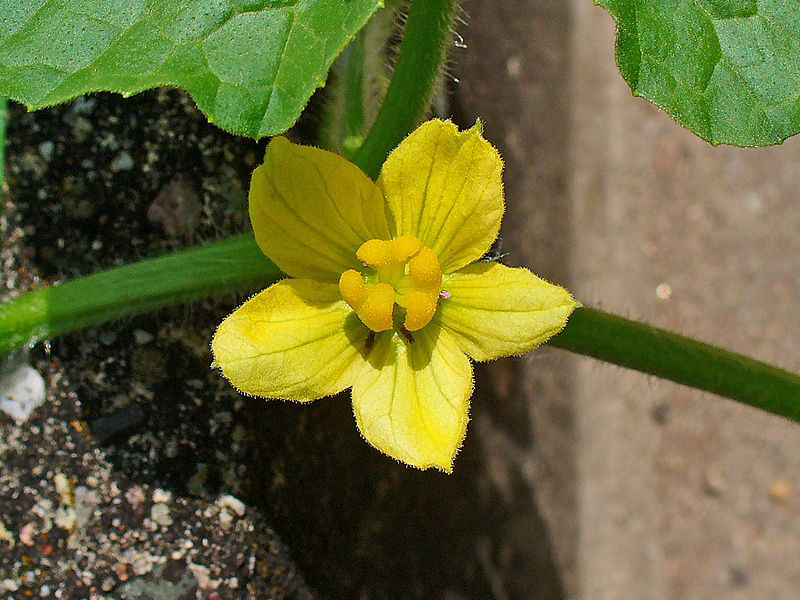 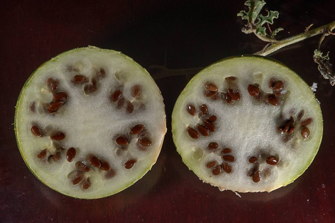 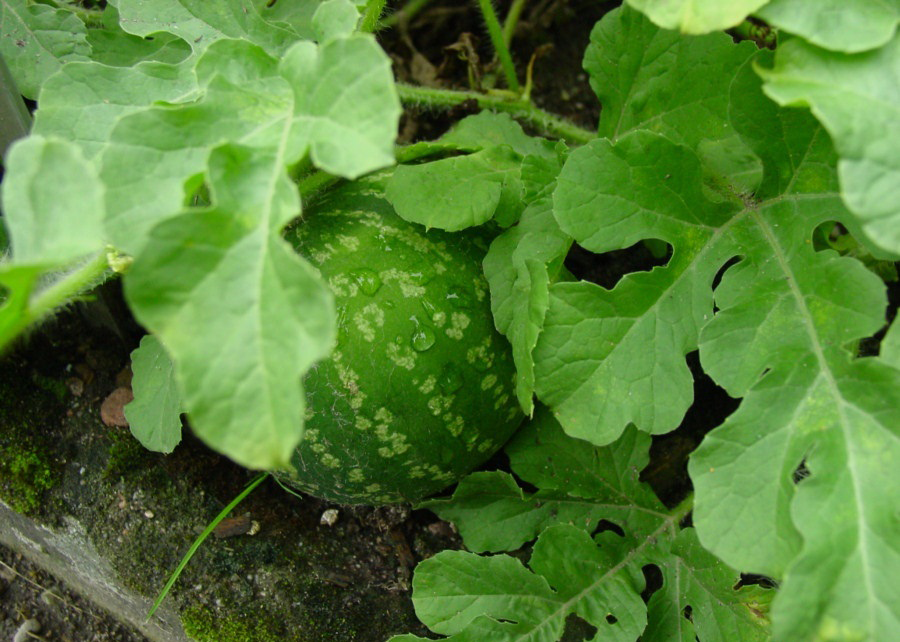 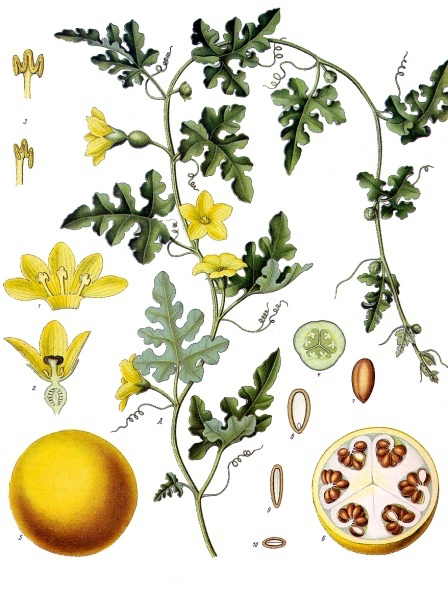 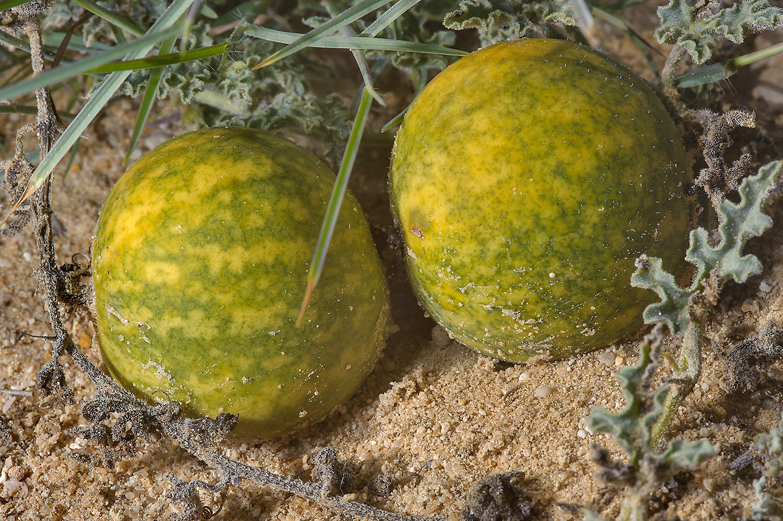 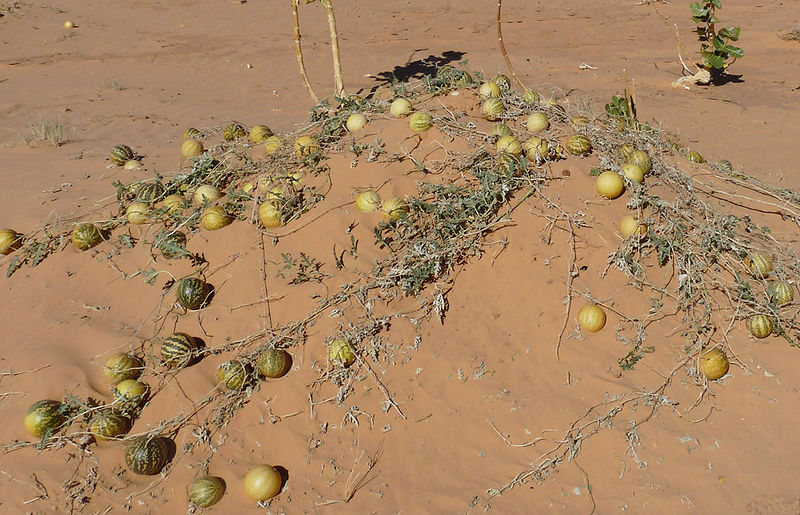 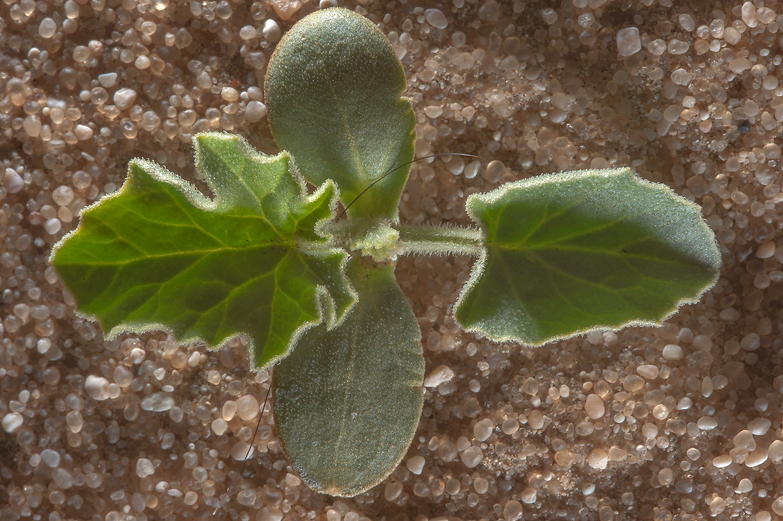 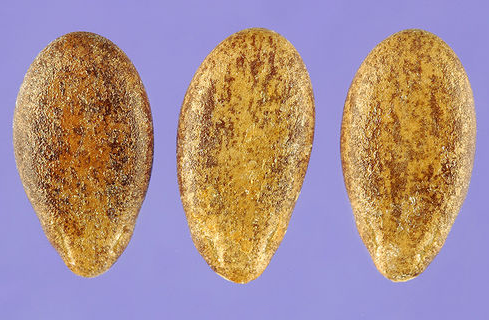 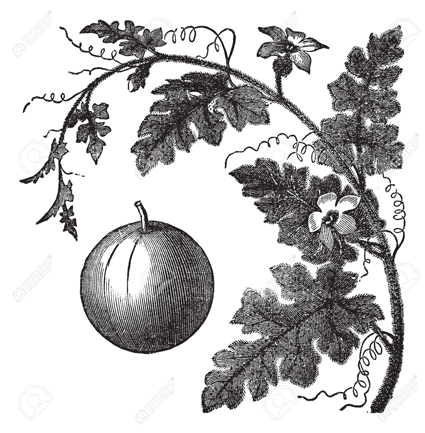 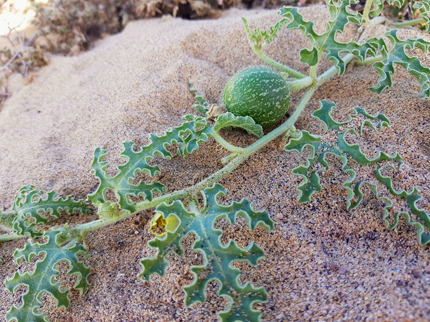