Food sources and facts of Iodine 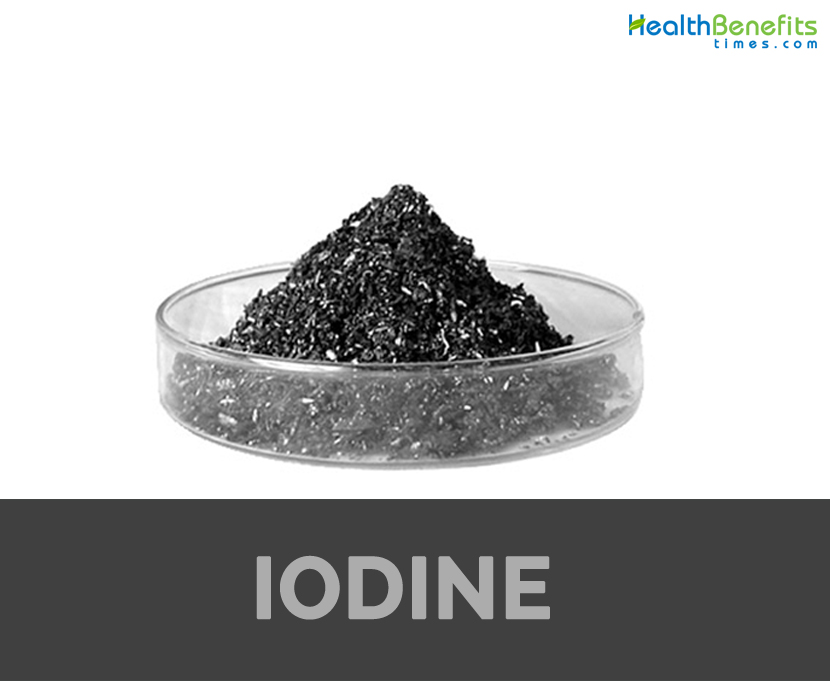 Found in many foods and in iodized salt, iodine is a mineral that the body requires to make thyroid hormones. Thyroid hormones control the metabolism of the body as well as other functions such as bone and brain development during pregnancy and infancy. Since the body is unable to make iodine, people must obtain it from their diet and, sometimes, supplementation.

Although iodine is found naturally in soil and seawater, the actual amount of iodine varies from location to location. Since the amount of iodine in a particular product may not be listed on nutrition labels, it may be difficult to determine the actual iodine in a specific food. Likewise, when cooking iodine-rich foods in water, a large amount of the iodine may seep into the water. This is fine if the water will be consumed, as in a soup, but this is an unfortunate waste of a valuable mineral when the water is discarded.

Sea vegetables, such as the various forms of edible seaweed, are the best sources of iodine. Brown sea vegetables have more iodine than red sea vegetables. But there are other excellent sources such as scallops and cod. Very good sources of iodine include yogurt, shrimp, cow’s milk, eggs, and strawberries. Sardines, salmon, and tuna are good sources. Iodine is readily available as a dietary supplement, generally as potassium iodide or sodium iodide. Multivitamins often contain iodine, and kelp and some other types of seaweed may be purchased as a supplement.

Here are some health benefits discussed on Iodine:

The only known function of iodine in the body is as an essential component of the thyroid hormones. The thyroid gland removes iodine from the blood and attaches it to tyrosine-containing proteins to form the thyroid hormones, thyroxine (T4) and triiodothyronine (T3). The thyroid hormones are then secreted into the bloodstream and are important regulators of cell activity and growth, both in utero and throughout life. Although they affect all tissues, they are particularly important in the development of the nervous and skeletal systems.

In a randomized, controlled study published in 2015 in the Journal of Nutrition, researchers from Zurich, Switzerland, and Marrakesh, Morocco, wanted to learn more about the effect iodine supplementation has on thyrotropin (also known as the thyroid stimulating hormone) and levels of serum cholesterol. Iodine is required for the production of thyroid hormones. A deficiency of iodine may lead to elevated levels of thyrotropin, which, in turn, is a predictor of higher levels of cholesterol. The cohort consisted of 163 overweight or obese Moroccan women, between the ages of 20 and 50 years, who were iodine deficient. For six months, the women took a daily 200 mcg iodine supplement or a placebo. The researchers found that the subjects with elevated baseline cholesterol levels who took iodine experienced an 11 percent reduction in total cholesterol. At a six-month follow up, the levels of thyrotropin were 33 percent lower in the treatment group than the placebo group. But the most dramatic results were in levels of cholesterol. Only 21.5 percent of the subjects in the iodine supplementation group continued to have elevated levels of cholesterol. That was in contrast to 34.8 percent of the placebo group. The researchers commented that iodine supplementation in people who are deficient may decrease thyroid disorders and help to reduce cardiovascular disease.

Iodine promotes thyroid glands function by supporting hormones production which is responsible for controlling base metabolic rate of the body. Metabolic rate affects organs efficiency and regular processes such as sleep cycle and food absorption and also transformation into usable energy. Triiodothyronine and thyroxine are certain hormones which influence heart rate, body weight, blood pressure and temperature. Body maintains Basic Metabolic Rate with the support of these hormones that assist in protein synthesis. It ensures normal creation or distribution in body for maintaining good health.

Pregnant women with adequate iodine help to prevent stillbirths and neurocognitive conditions such as cretinism in newborn babies. It results various complications and gestational hypertension during infancy. It promotes proper growth and movement of baby with hearing and speech abilities. Moreover, besides its effect on baby’s health once conceived, iodine deficiency could make women infertile. Pregnant women should realize iodine intake for child as well as themselves because it passes into breast milk and is lost every day. Study have shown that nursing and pregnant women could lose more than entire needed dose of iodine daily that could result in serious deficiency even after pregnancy or breastfeeding.

People focus on thyroid gland implications of iodine but it has other functions as well which includes major booster for immune system. It scavenges free hydroxyl radicals and alike Vitamin C, it promotes antioxidant activity throughout body for providing strong defensive measure against diseases such as cancer and heart diseases. Study have shown that it protects brain cells of rats from free radical’s effects by linking to fatty acids in cell membranes and allows lower chances for free radicals to affect organism.

Hypothyroidism is a condition outlining by under-active thyroid gland and results slowing down of bodily process as chemical balance in body goes off track. Hyperthyroidism is commonly resulted due to large increase in weight as the body does not burn off calories to convert them into energy. Though hypothyroidism occurs for various reasons not only deficiency of iodine but it is a great idea to promote iodine intake and stimulate hormonal activity that eventually helps to lose weight. Hypothyroidism shows some other effects such as dry skin, fatigue, constipation, troubled concentration, leg swelling and cramps. If left untreated, it could lead to serious conditions such as coma and heart failure.

Iodine lowers conditions such as turgidity, fibrosis and breast tenderness. It provides relief from fibrocystic diseases and is used widely in both modern and traditional therapies. Studies concluded significant correspondence between molecular iodine and lowering signs or symptoms of fibrocystic breast disease.

Iodine also possesses anti-carcinogenic property. Study has shown that cancer cells diminish after being injected with iodine and even they undergo apoptosis and replaced with healthier cells. But the exact mechanism for this process is unknown. Studies have shown positive connection in terms of effects on promoting apoptosis in breast cancer carcinoma cells.

It is required to prevent these harmful forms of cancer. Study shows that thyroid cancer patients have lower symptoms of cancer after increasing intake of iodine. Thus, thyroid cancer is common in people with iodine deficiency.

Iodine assures apoptosis and programmed cell death which is required for formation of new organs as well as in elimination of malignant cells such as diseased or cancer cells that might become harmful to any individual. This function is derived from thyroid gland effects and regulation or hormonal secretion.

Iodine flushes out harmful chemicals such as lead, fluoride, mercury or biological toxins. Role of extra thyroidal iodine is crucial as it does other work throughout body.  It possess antibacterial qualities such as Helicobacter pylori that is a harmful bacterial infection in stomach commonly known to be H. Pylori which is associated with gastric cancer.

What happens due to deficiency or excess Iodine?

Ingestion of multiple grams of iodine at one time can cause acute poisoning. A very large amount of iodine causes fever, abdominal pain, burning of the mouth, throat & stomach, nausea, vomiting, diarrhea, heart problems, and coma.

Excessive iodine ingestion can cause hyperthyroidism, the opposite of low thyroid. It can also cause goiter, thyroid inflammation (thyroiditis), and thyroid cancer. Long-term consumption of excessive amounts of iodine may also cause hypothyroidism. This can happen at any age. The reaction of a person’s thyroid to excess iodine may depend on his or her previous levels of iodine and any existing thyroid disease, as noted above. Case reports have shown that high iodine intake can also potentially slow down thyroid function.

There is a serious illness highlighted by a rash specific to high iodine intake called iodermia. The rash can look like acne, hives, or be red and itchy. Iodermia can actually lead to death.

In addition to iodine in supplements, iodine is contained in some medications, for example, amiodarone (for irregular heart rhythm). It is also contained in disinfectants like povidine-iodine and in some contrast media used for x-ray studies. Molecular iodine (I 2) does not cause the same problems as iodine (I), and larger amounts may be tolerated.

Facts and Food Sources of Dihydrophylloquinone

Facts and Food Sources of Isorhamnetin

Facts and Food Sources of Indoles